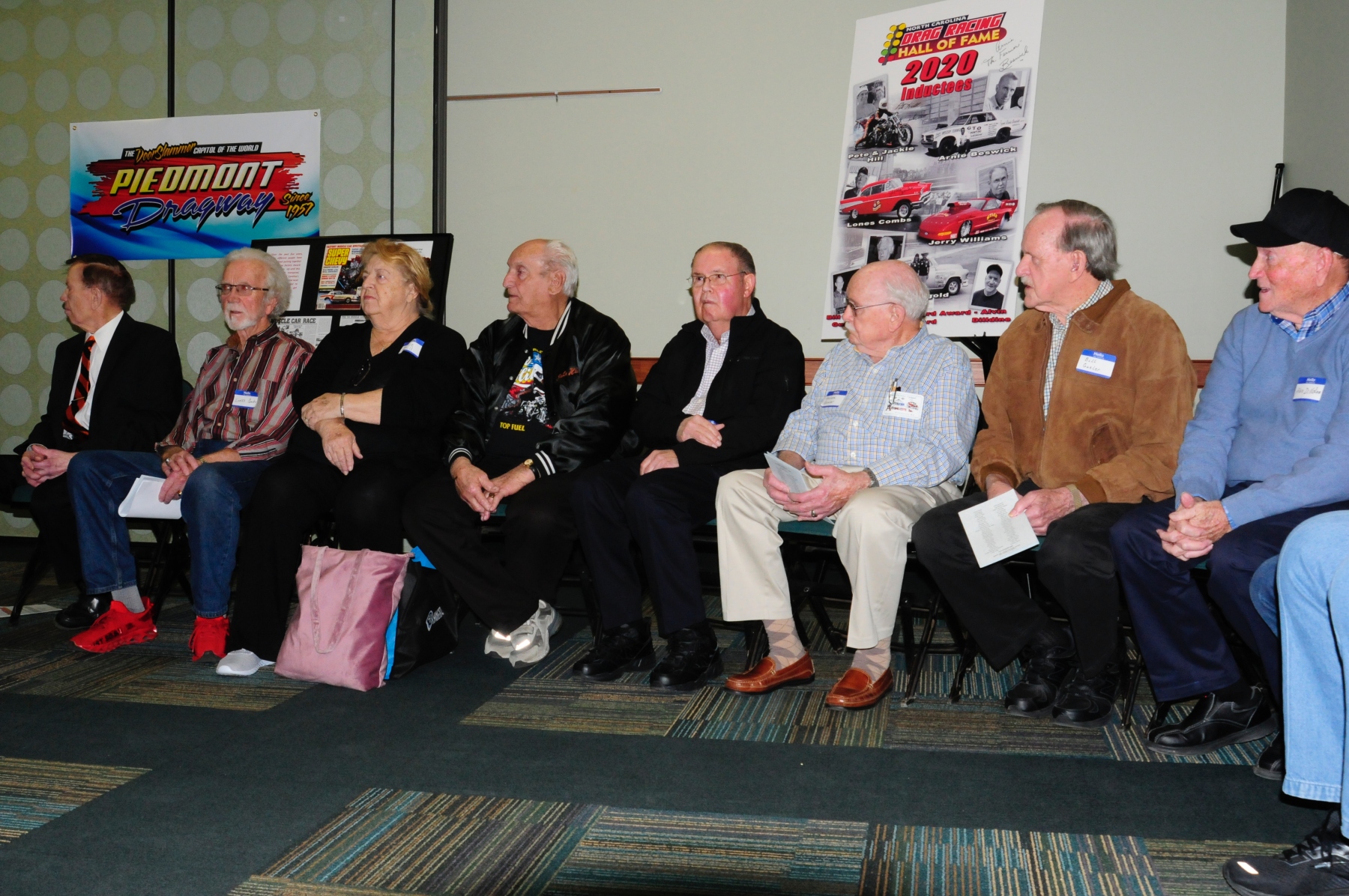 In the Carolinas around Valentine’s Day, racers have come to expect the happening that is the Hot Rod & Drag Expo, taking place at the Greensboro Coliseum, with the event culminating in the induction ceremony for the North Carolina Drag Racing Hall of Fame. Beginning in 2007, and each year since, a select group of racers have been recognized for contributions made to the sport of drag racing in the state.  A state, second only to Texas, in the total number of tracks. Last count is 18.

Under the guidance of Executive Director Jim Turner and the directors group that includes racers, track operators and managers, car owners, and media, a group of individuals numbering only 5-6 people have their names put in an elite gathering. Overall racers from cars and bikes, track announcers, and those whose companies have had a huge influence in our sport have their name(s) called and are given a unique award and jacket to commerate the day.

This year’s class was no different than in the past with an individual who started his career in the ’60s in North Carolina, a man who had raced just one car for the majority of his career, a racer who found later success as a car owner, a class racer who won over 90 events since the ’70s and a noted Top Fuel racer on two wheels. 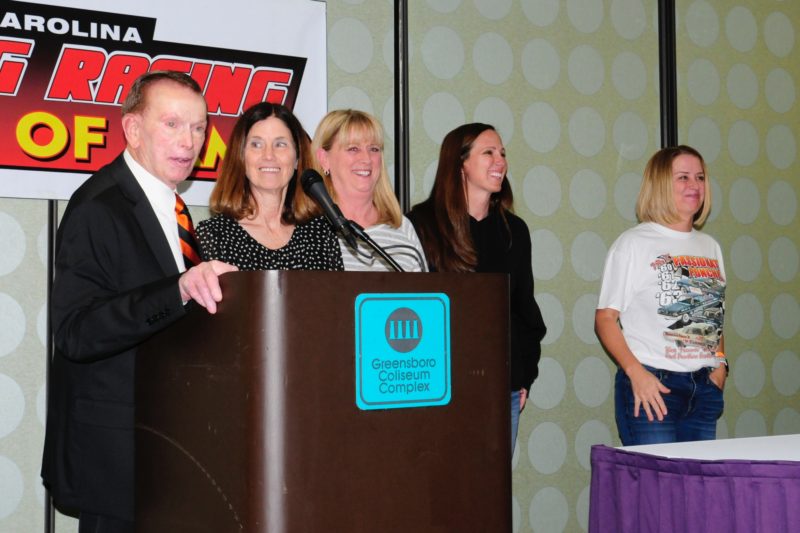 Beginning in the 1960s, Arnie Beswick began making a name for himself and his chosen brand, Pontiac, from North Carolina to Florida. This was tough, considering he called Morrison, Illinois, home and would come to Piedmont Dragway for the amount of only $200. Whether his car was called “The Mystery Tornado,” “Passionate Poncho,” “Tameless Tiger,” or “Boss Bird,” Beswick was usually the fastest at any event he attended, winning races too numerous to count from Daytona Beach, Florida, to Farmington and Piedmont Dragway in North Carolina, Cecil County, Maryland, and Cordova, Illinois.

Lones Combs is known, and has been for many years, for his beautiful ’57 Chevy. The solid red beauty was a standout in AHRA and IHRA and is now a threat in the Carolina Class Racers Association, and Classic Gear Jammers, still running the same car.

Jerry Williams was known for his ability to make a run and take off his helmet with not a hair out of place, as he raced in IHRA Super Stock and Modified with backing from Sports Marketing at RJ Reynolds, also his employer until his retirement some years ago. With drivers such as Todd Howard, and help from sons Brian and Jonathan, Jerry’s Fulton-powered Mustangs were a threat in Quick 8 then Big Dog, winning the championship with Todd at the wheel and becoming the first Big Dog car in the 3-second zone.

Buddy Ingold ran a group of Stockers that consisted of Oldsmobiles, Pontiacs, and Chevrolets, winning over 90 Stock Eliminator events, setting records in AHRA and IHRA and becoming track champion at several of the tracks throughout his home state of North Carolina. We lost the “Record Breaker” over a year ago and he is still missed by many who knew him.

Pete Hill was an innovator in Top Fuel Harley, becoming the first man to successfully put a blower on a KnuckleHead Harley and proceeded to win events all over North Carolina, as well as many other states up and down the East Coast with visits to the bike rally in Sturgis, South Dakota, where he was a headliner each time he appeared, along with such well-known Harley people that included Willie Davidson. 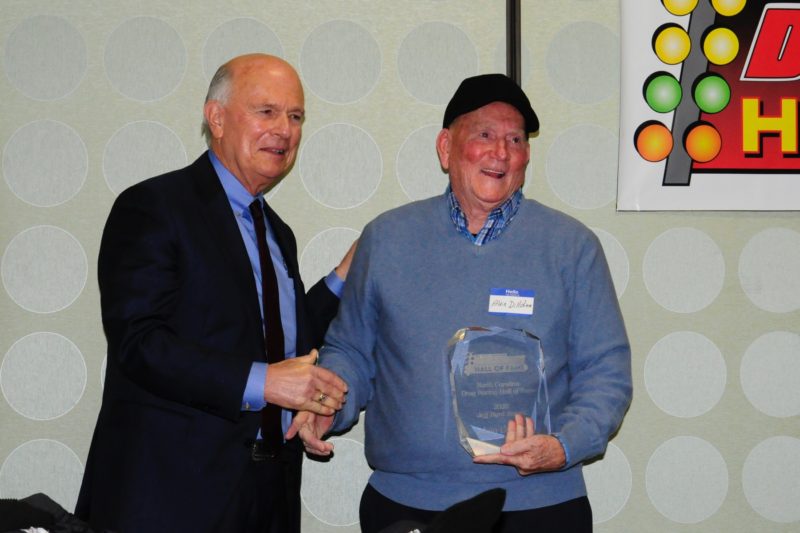 Receiving the Jeff Byrd Memorial Lifetime Achievement Award was longtime announcer and former track operator Alvin Dildine. At 75-plus years of age, Alvin shows no signs of slowing down and has now branched out to tracks in other states, as well as his two home tracks, Piedmont Dragway and Rockingham Dragway.

Last, but not least, the Pioneer Award is given to an individual(s) that have contributed to the overall well being of our sport, as well as helping racers with parts and pieces to help them keep racing when maybe they might have had to stay home. This year’s recipients were Bill and Nelson Gusler. Their auto parts/speed shop was well know all over the East Coast. That company was Southern Automotive.

This is our group for the 2020 year and a great group it is. With an ever-growing list of prospective recipients, the 2021 class is sure to be just as strong and will give the members of the nominating committee many long conversations as to just whom to put in one of the coveted spots for the year.