Vincent Nobile (above) is with a new team this season and will debut a new Mountain View Tire Pro Stock Chevy Camaro at this weekend’s NHRA Four-Wide Nationals at zMAX Dragway. The way he figures, he may as well add one more first in Charlotte, that being a victory at one of the biggest events on the NHRA Mello Yello Drag Racing Series circuit.

Nobile, now part of the ultra-successful KB Racing team that includes world champions Greg Anderson and Jason Line, will race for the fourth time at the unique and intense Four-Wide Nationals at zMAX Dragway, the site of the only four-lane, all-concrete dragstrip.

It marks the fifth of 24 events during the 2014 NHRA Mello Yello Drag Racing Series, and Nobile could think of nothing better than to send his new Camaro to the winner’s circle in its first race and win for the first time as part of KB Racing. 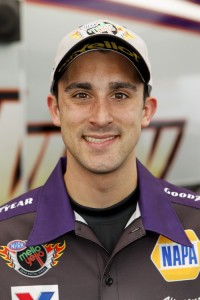 “For a new car and the few runs we’ve made it’s doing really well,” said Nobile, who has eight career victories. “It’s responding well to what we want to do. It’s just a matter of testing and trying some things and hopefully falling on something. We’re happy with it and there’s no reason we can’t do well with it right off the bat. I definitely think we can win the race.”

A year ago Spencer Massey (Top Fuel), Matt Hagan (Funny Car), Mike Edwards (Pro Stock) and Hector Arana Jr. (PSM) won at the Four-Wide Nationals, which will once again be televised on ESPN2.

With Edwards, a two-time Four-Wide Nationals winner, taking a break from competition and local favorite and two-time winner Anderson still recovering from heart surgery, a first time winner will be crowned in the Pro Stock field this weekend.

Nobile is well aware of that as well as the multiple challenges the races presents, and feels ready to make a strong attempt at his first Four-Wide Nationals victory.

“I’ve been there and experienced all this race has to offer so I feel comfortable racing there,” Nobile said. “It definitely takes a little more concentration, but I tend to just do my own deal anyway. Specifically at this race I may speed up my process a little bit, but as long as you stage and focus on your bulb you should be fine. It’s a good race and whatever the fans like makes me happy. If I happen to come home with a Wally that just sweetens the deal.”

A victory would also been a strong boost to an already solid season for Nobile in his debut campaign with KB Racing. He advanced to the semifinals of the first three events of the season and following a first-round loss at the most recent event in Las Vegas, Nobile currently sits fifth in points.

But in Nobile’s eyes, the class continues to reach new levels in terms of competitiveness. Points leader Erica Enders-Stevens comes to Charlotte on the heels of a memorable weekend in Las Vegas that included winning the K & N Challenge as well as the event. Other top competitors include Allen Johnson, reigning world champion Jeg Coughlin, Line, V Gaines, Shane Gray, Dave Connolly and Jimmy Alund.

“I’ve never seen Pro Stock so competitive,” Nobile said. “The top 10 or so guys are within one or two hundredths. It’s really tight and anyone is capable of winning. The main thing now is making the most of your qualifying runs. You have to make as good of runs as possible in all four sessions. That’s how you win races.”

The championship pedigree at KB Racing, which includes six world championships between Anderson and Line, is also beneficial and Nobile has already noticed the benefits.

“I really like working with these guys,” Nobile said. “They’re down to earth guys and I’ve gotten a little closer with them now that they’re teammates. The KB team has definitely proven a point with the championship and race wins they have.”