Round one of eliminations for all classes at No Mercy IV: Fight to the Finish, the big drag radial race this weekend (Sep. 26-29) in Cecil, GA, were completed Friday night on the all-concrete eighth mile at South Georgia Motorsports Park. Among the highlights in the premier Radial vs. The World class was an outstanding 4.208 pass at 194.58 mph by “The” Kevin Mullins (above, far lane) in his High Point, NC-based ’97 Mustang, representing the quickest-ever drag radial pass in competition. 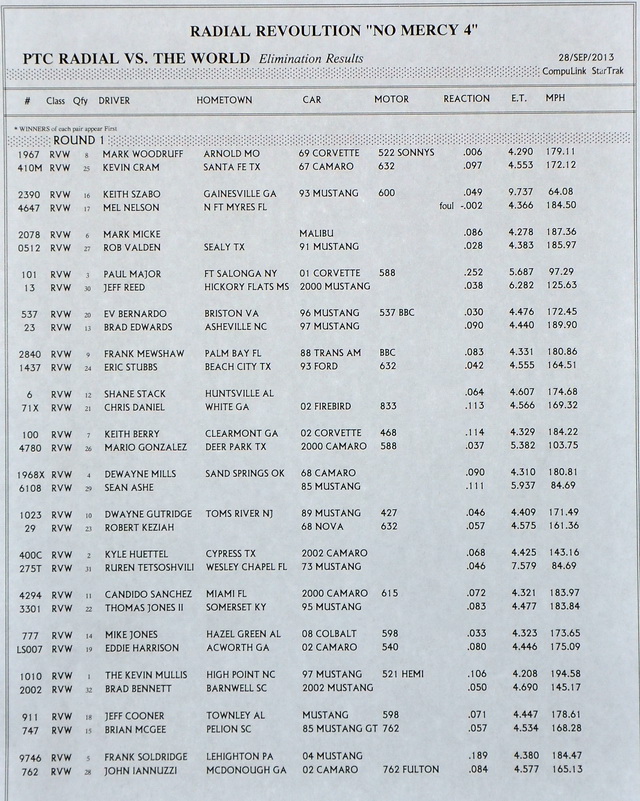 Shane Stack (far lane) out of Huntsville, AL, needed a holeshot in round one of Radial vs. The World to get around Chris Daniel of White, GA. 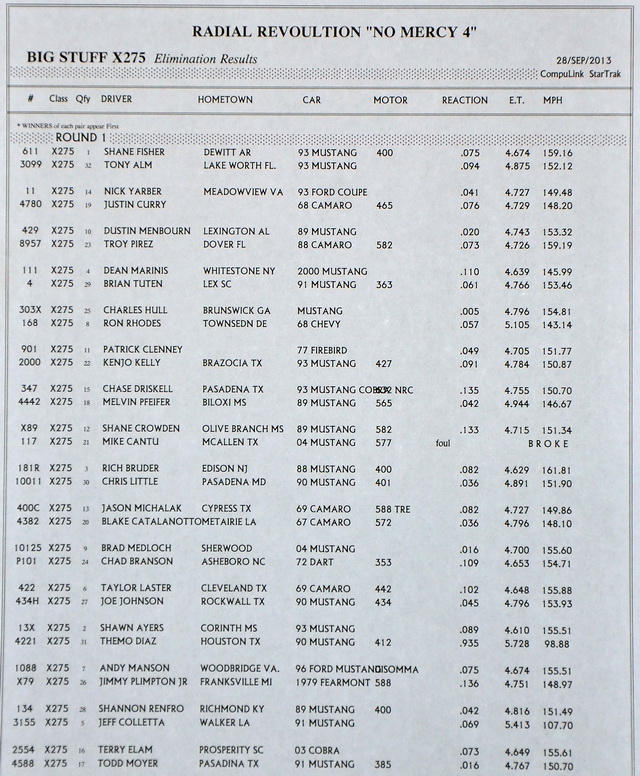 After defeating Chris Little with a 4.569 at 161.81 mph in the first round of X275 racing at No Mercy IV, former DRAG ILLUSTRATED cover feature Rich Bruder crashed his ’88 Mustang well past the South Georgia finish line. Bruder walked away uninjured from the wreck, but his weekend was over. 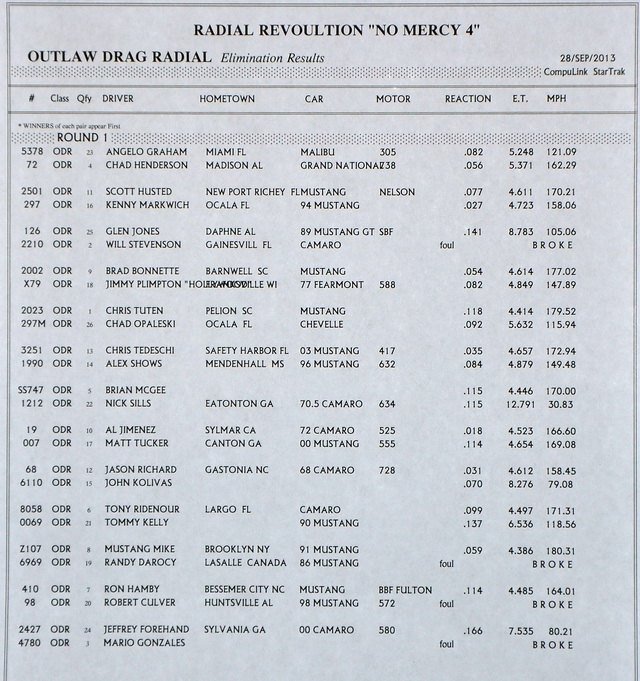 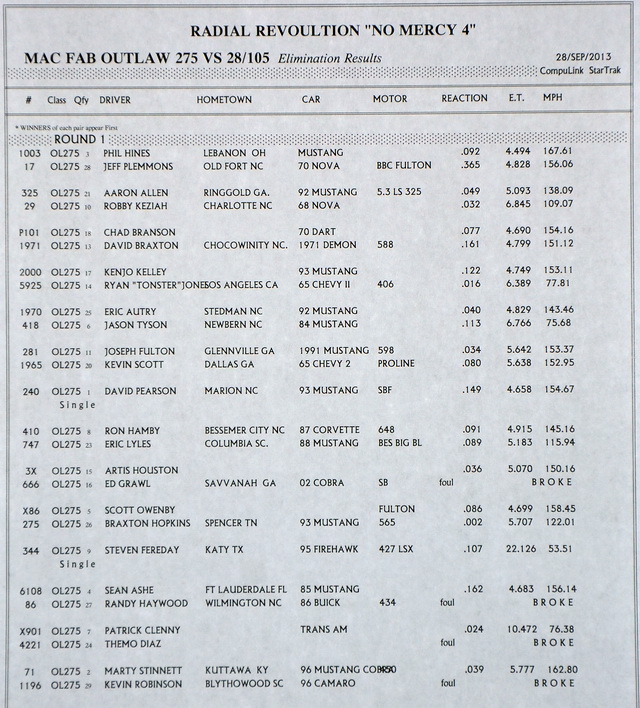 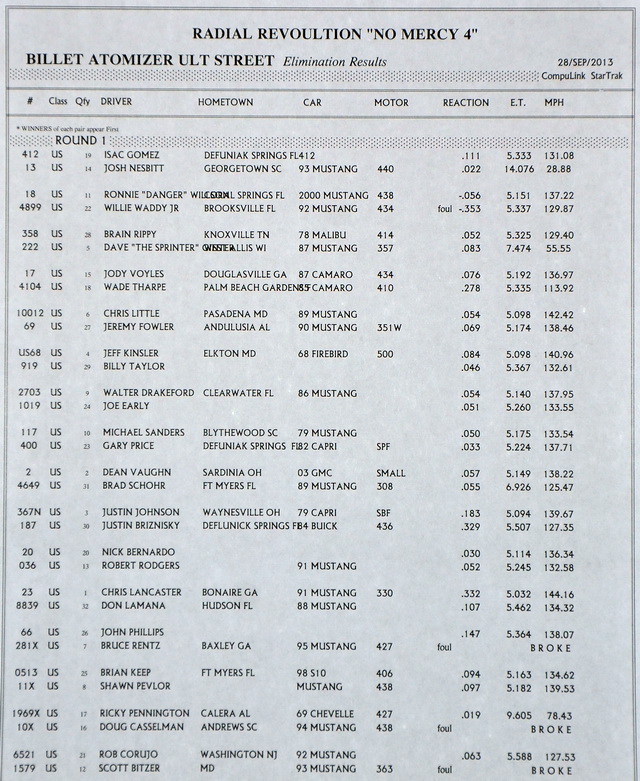 Jason Michalak, driving as part of the Bad 9er team with Kyle Huettel, drove his ’69 Camaro to a first round win over Ricky Bayley in the Leaf Spring class at No Mercy IV.

Paul Major was the number-three qualifier in Radial vs. The World and won over Jeff Reed in the first round, but fell in round two against 14th-place starter Mike Jones. 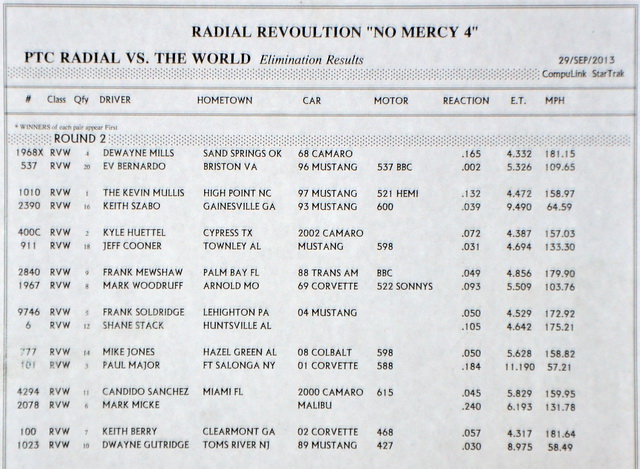 “The” Kevin Mullins watches as his $10,000 cash prize is counted out in the South Georgia Motorsports control tower immediately after he won the Radial vs. The World class at No Mercy IV: Fight to the Finish. (Ian Tocher photos) 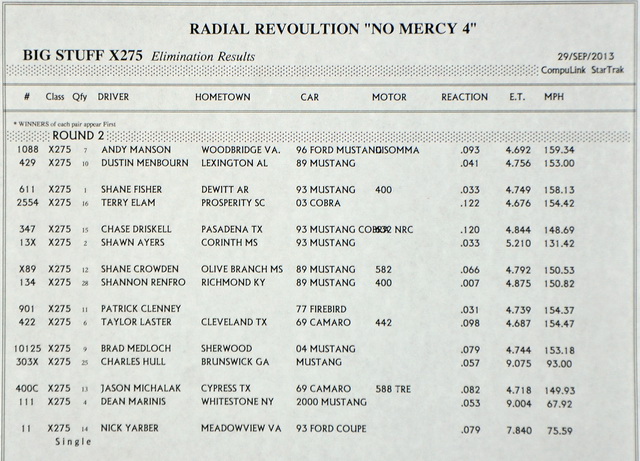 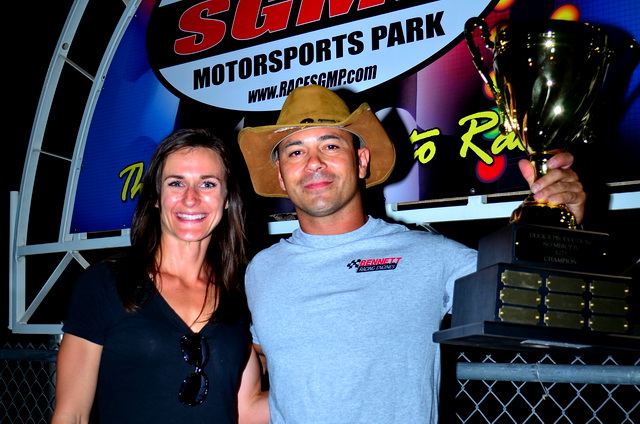 Shane Fisher celebrates with his wife in SGMP’s winner’s circle after taking the X275 win at No Mercy IV. 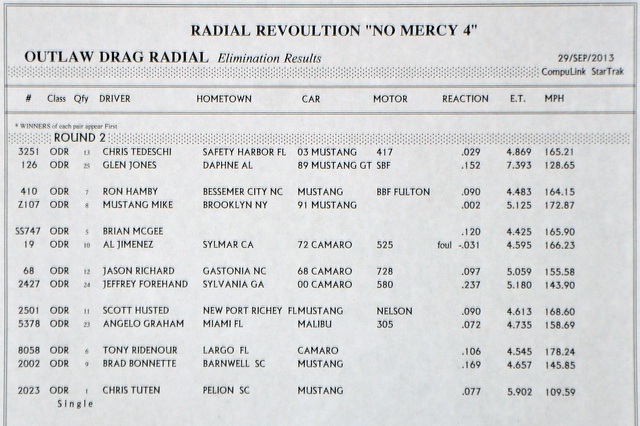 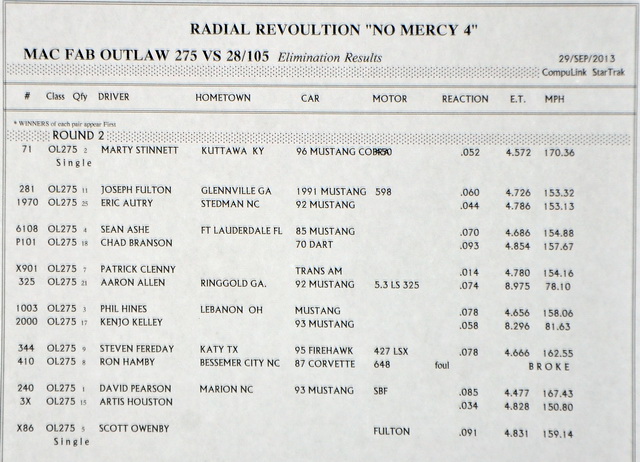 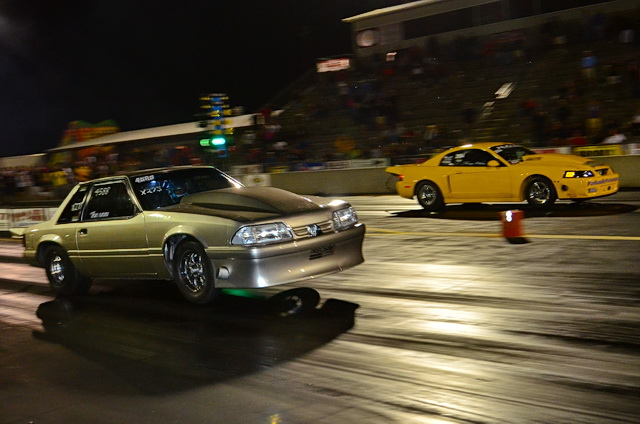 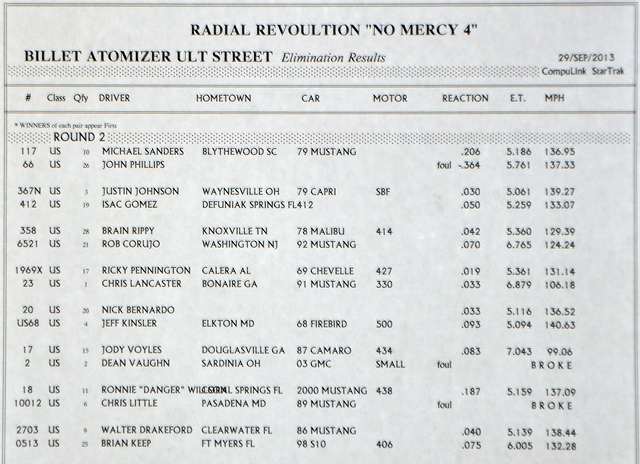 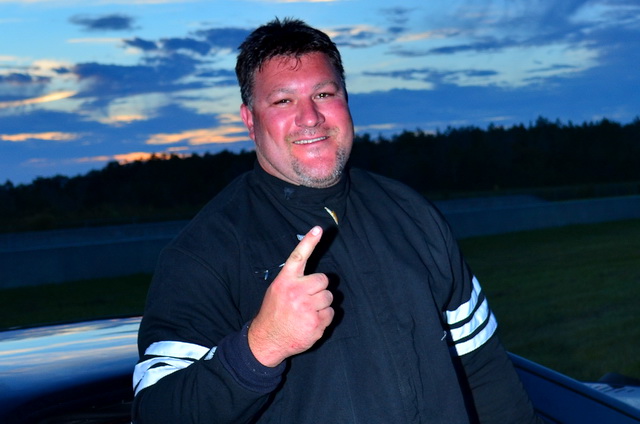 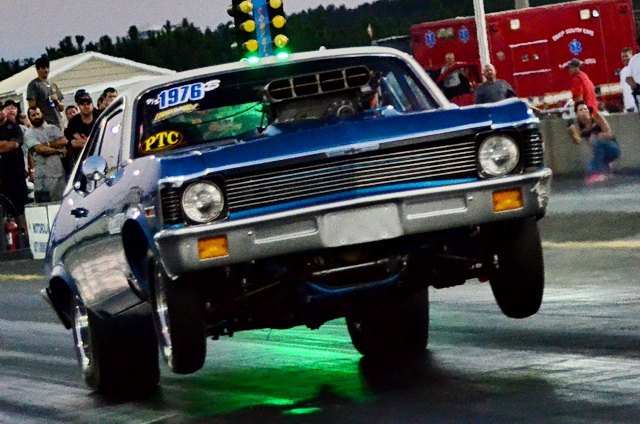 Delaware’s Ron Rhodes made a solo pass in the Leaf Spring final when his John McDonough was unable to answer the call to the lanes. 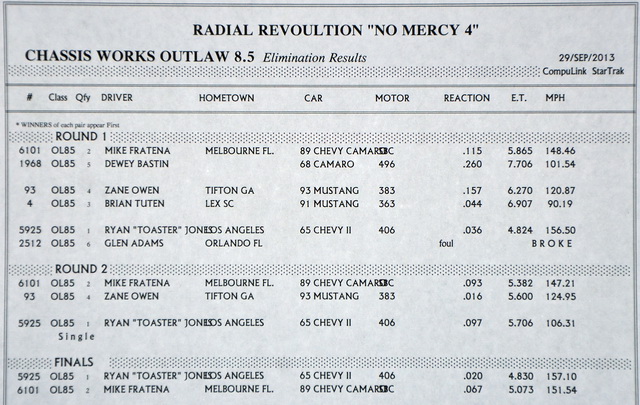 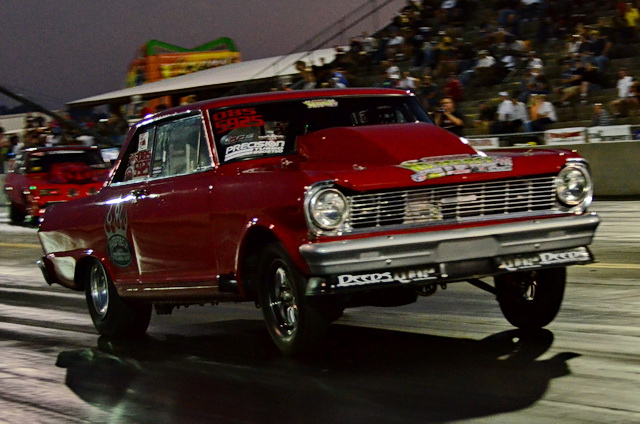 Ryan “Toaster” Jones came all the way from Los Angeles to participate in No Mercy IV and despite enduring several mechanical setbacks, he and his crew persevered to take the new Outlaw 8.5 class win back to the West Coast. 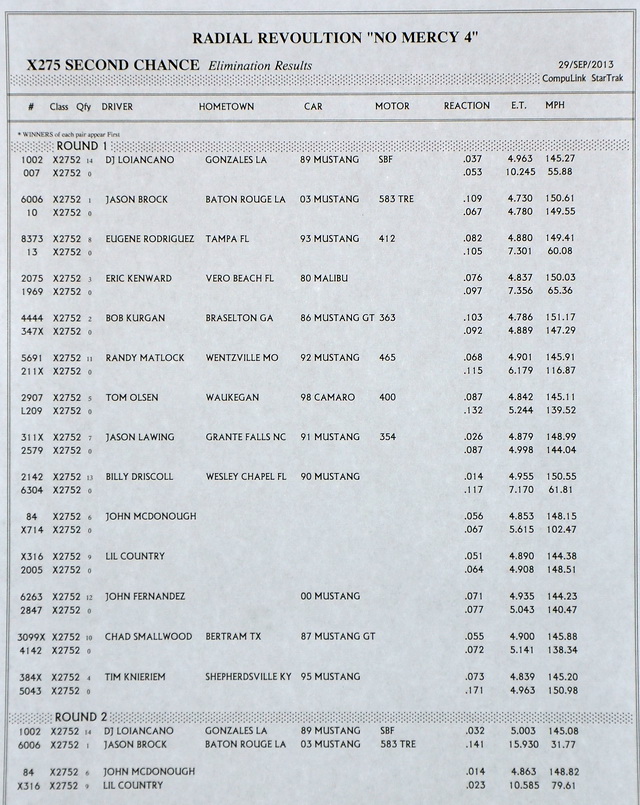 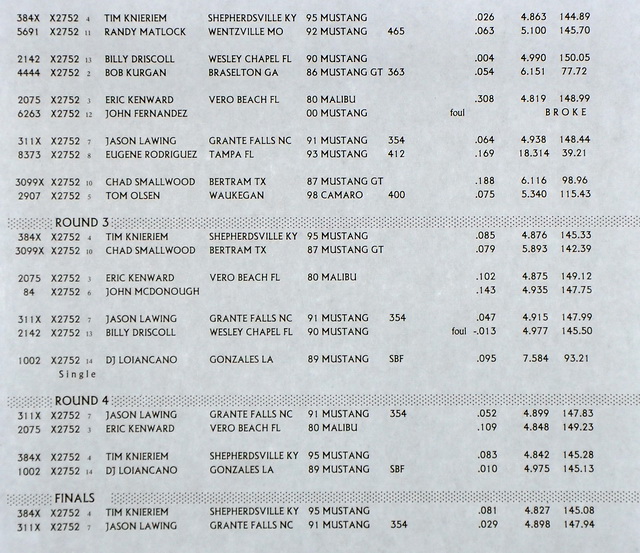