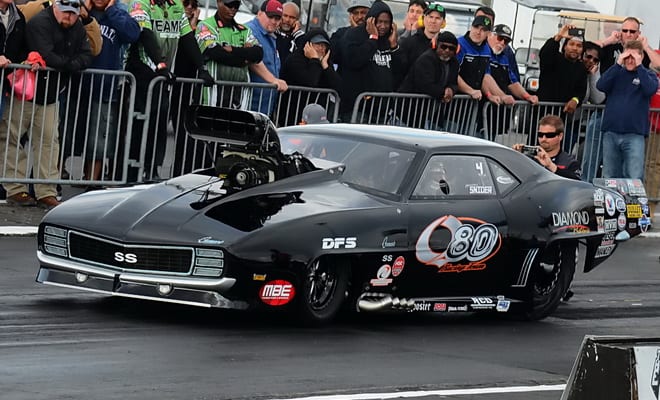 When the track became too cold for safe competition at the Professional Drag Racers Association (PDRA) season-opener last month in Tulsa, OK, series officials decided to complete the semifinals and finals for its three premier classes within qualifying for this weekend’s PDRA Spring Nationals at North Carolina’s famous Rockingham Dragway.

After three scheduled rounds of qualifying for all classes were completed Friday night, all three number-one starters from the Tulsa event finished in victory lane, with Brandon Snider (above) prevailing in NAS Racing Pro Extreme, Tommy Franklin winning in Switzer Dynamics Pro Nitrous and Kevin Rivenbark victorious in GALOT Motorsports Pro Boost. They joined Chris Garner-Jones, who had wrapped up the Drag 965 Pro Extreme Motorcycle title before the race in Tulsa was cut short by dropping temperatures. 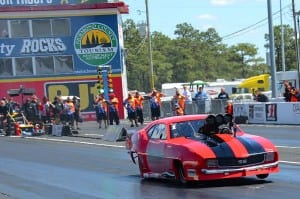 Brandon Snider ran a career-best and record-setting 3.48 seconds at 219.47 mph to secure the top position over the 16-car Pro Extreme field in Tulsa. He then steered his Q80-backed ’69 Camaro to preliminary round wins over Carl Stevens Jr. and Todd Tutterow to set up a semifinal match against Dubai’s Khalid al Refaei. Meanwhile, Scruggs qualified second with a 3.49 at 220.08, then drove to a first-round win over John Sullivan Jr. before making a solo pass when Johnny Cobb was unable to show for the quarter finals.

Unfortunately, al Refaei and his NAS Racing teammates didn’t make the trek to Rockingham, so it was Snider’s turn to run alone in the semis with a 3.55 at 219.79 while Scruggs beat a red-lighting Mike Recchia with another 3.49 at 222.44 that also held the top spot for Rockingham qualifying with one more round scheduled for Saturday before eliminations begin.

In the final, Snider left first with a .022 holeshot, then posted another 3.55 at 218.87 to beat an early shutoff 4.77 at just 115.59 by Scruggs after his own ’69 Camaro went into severe tire shake about 100 feet out. “I thought about taking some power out of it while we were waiting (on track clean up after a crash by Wesley Jones) and it looks like I really should have,” Scruggs admitted. “The track got colder and I think that’s what bit us.” 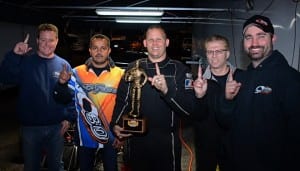 Snider suspected as much, saying he also had hoped to run a little quicker but briefly lost traction early in the run, too. “To be honest I’m having a little trouble reading the track today,” he said. “I think Jason probably thought we’d be faster, too, and he maybe pushed a little too hard.”

Snider also revealed he narrowly avoided disaster at the top end after a major oil fitting broke in half just as his car crossed the eighth-mile finish line and sprayed the slick mixture under his left rear tire. Oil continued to drip from engine and suspension parts as the car sat idle in the pits nearly 20 minutes later.

“I felt the car slide sideways at exactly the same time as the chutes hit,” he said. “I’ve been in a couple of wild rides in these things before, but I’ve gotta say that probably scared me more than any of them. It was already getting out of shape when they caught me and that wasn’t a good feeling at nearly 220 miles an hour.” 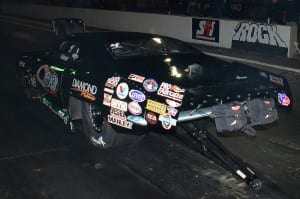 Qualified fourth with one more qualifying round to go for the PDRA Spring Nationals, Snider said he may sit out the final session in order to save parts. He’s excited about the opportunity to double up with another event win on Saturday, though.

“We qualified number one, set a record and won the race, even if it is three weeks later, so we got the maximum amount of points out of that first race,” he pointed out. “That’s what we’re all about this year, going rounds and winning races and the championship will take care of itself. We’re going to do our best to win it all again tomorrow.”

Consistency counts for Tommy Franklin and although his car wasn’t quite as quick in Rockingham as it was three weeks earlier at Tulsa, where he made a record 3.68-seconds run at 203.34, it remained as predictable as ever. 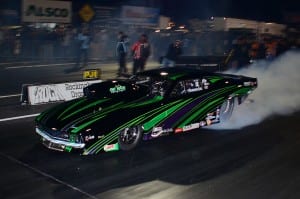 “We ran so good in Tulsa, so yeah, it would’ve been nice if we could’ve just finished things up there, but we have a good car here, too, considering the conditions with the temperatures going a little crazy,” he said.

With only 15 cars in the field at Tulsa Raceway Park, Franklin ran unopposed in the opening round, then overcame a holeshot by Jason Harris to advance and meet Jay Cox in the postponed semis at Rockingham. On the opposite side of the ladder, third-place starter Travis Harvey took down Joshua Vettel and Pat Stoken in Tulsa, but never had to race Steve Jackson in Rockingham after Jackson’s car failed to start for a second-round solo pass in Tulsa.

Running alone in the right lane of “The Rock,” Harvey grabbed the provisional number-one position in qualifying for the PDRA Spring Nationals and took lane choice for the Tulsa final with a 3.743-seconds pass at exactly 200 mph. Franklin then led stripe to stripe over Cox, going just four-thousandths of a second slower than Harvey on a 203-mph run to the eighth-mile stripe. 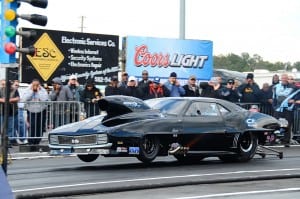 Harvey left with a sizable .056 advantage off the start in the final, but his ’69 Camaro faltered to a 4.5-second run at just 123 mph, while Franklin and his similar ride secured the win by going 3.742 at 203.49 mph. “Travis is an excellent racer; you’ve always got to be on your best game to beat him, and fortunately we just put another solid run together,” he said.

Dean Marinis took over the qualifying lead in Friday’s last qualifying session with a 3.730 pass at 202.79 in his 2015 Corvette, but unfortunately crashed in the shutdown lanes and was unable to continue in Saturday’s elimination rounds.

“I hate that happened to Dean; you never want to see that happen to anyone,” Franklin said. “But we’re going to come out in that last qualifying round and see if we can get our second straight number-one qualifier and then get another win. That’s what we’re hoping for, anyway.”

Pro Boost racer Kevin Rivenbark was in a class by himself on Friday at Rockingham, running consistent 3.70s, with his GALOT Racing teammate, John Strickland, coming closest with a 3.802 that placed him second behind Rivenbark’s 3.761 at 200.02 in the Tulsa final over Melanie Salemi. 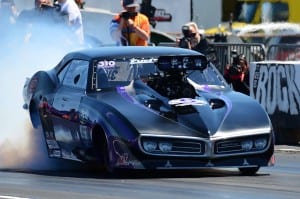 Salemi was going after her second-straight Pro Boost win at Rockingham after winning her career-first PDRA event there last fall. However, her final this time around got off to a rough start, or more accurately, a no start after the supercharged engine in her ’68 Firebird failed to fire. While Rivenbark completed his burnout, backed up and creeped forward toward the starting line, Salemi and her team desperately tried to get her car started. Just when it looked like she was going to be timed out by the PDRA starter, the reluctant ‘Bird roared to life, she completed a very short burnout and went straight to staging against Rivenbark.

“I’ve got to hand it to her; that had to be at least a little bit unsettling but she handled it like a pro,” Rivenbark said after winning with his 3.76 pass against a 3.846 at 192.85 by Salemi. “Even though she’s still pretty new to these cars I think she’s one of the best drivers we have out here. She’s really interested in learning more about them and learning how to get better in them.” 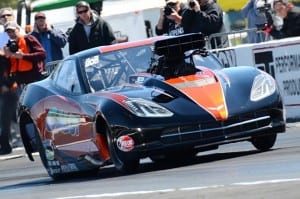 Despite his race-day dominance, Rivenbark also felt he had a little luck riding along in his roots-blown 2015 Corvette, especially in the final round. “We broke a gear in the rear end right as I got off the gas at the finish line,” he said. “I knew what it was right away; I’m just glad it happened at that end of the track and not at the start or during our burnout.”

Regardless of the breakage, Rivenbark remained confident in his team’s ability to repeat with another event win on Saturday at Rockingham. “That’s what we’re here for, to win these races and hopefully that’ll add up to a championship at the end of the year.” 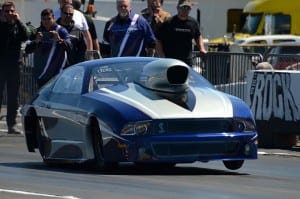 The only other class to complete all three rounds of qualifying on Friday for the PDRA Spring Nationals was Extreme Pro Stock in its first appearance with the series since the 2014 season.

With Pro Extreme Motorcycle, as well as the PDRA sportsman and Jr. Dragster classes still to complete round three of qualifying, on-track activity is expected to resume at 9 a.m. on the Rockingham Dragway eighth mile.