The third event of the 2021 Holley NMRA Ford Nationals drag racing series took place just outside of St. Louis, Missouri, at World Wide Technology Raceway over the weekend of May 15-17, 2021, with the 16th Annual NMRA/NMCA Super Bowl of Street-Legal Drag Racing Presented by HPJ Performance.

An iffy weather forecast presented challenges to the schedule, but the bulk of the event was able to be completed. Sadly, on Sunday afternoon, the rain returned and prevailed to the point where the race had to be called. Some classes were able to be run to completion, but the remaining final rounds that weren’t wrapped up will be contested at the next event, the Inaugural NMRA Ford Performance Nationals at Summit Motorsports Park in Norwalk, Ohio, over the weekend of June 10-13, 2021.

From the vendor midway to the UPR Products Car Show, exciting on-track action and tons of new personal bests and records, the event was a highlight of the NMRA tour and only further fueled the fire of the critical season championship points chases that are already in full swing. 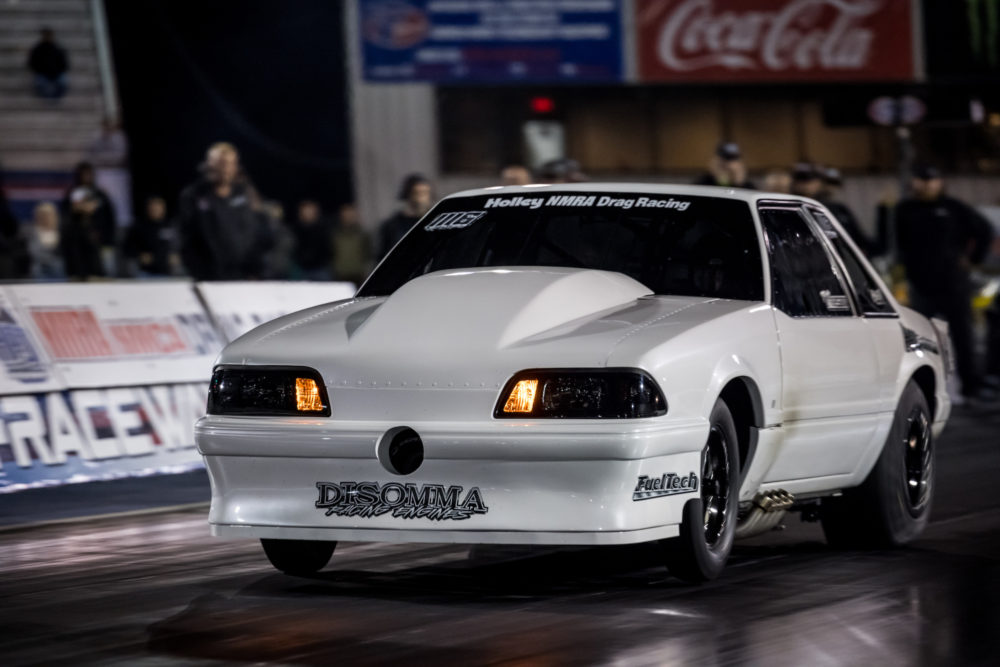 In the combined NMRA VP Racing Madditives/NMCA Mickey Thompson Street Outlaw class, Tony Hobson of Lake St. Louis, Missouri, clinched the qualifying advantage when he ran 4.279 at 167.07 mph in his ProCharged ’90 Mustang for the number one position. Hobson held strong throughout eliminations and put Nicky Notch’s ’79 Mustang on the trailer in the semi-finals. Newcomer to the NMCA series, Randy Matlock of Missouri, had a bye and was eligible to race his LS-powered ’92 Mustang in the rain-postponed finals, but the two men will have to wait to run one against another until the NMRA and NMCA meet up again in Martin, Michigan, and a winner can be determined.

NMRA Edelbrock Renegade joined forces with the NMCA Edelbrock Xtreme Street class, and reigning NMRA champion Joel Greathouse outran the rest of the field in qualifying with his 4.522 at 155.15 mph time slip. Greathouse and his KBX Performance-backed ’93 Mustang, which is owned by Jeremy Wolf, scored four round wins in a row to race in the finals against the number three qualified driver, Martin Connelley, who had done the same with his ’90 Mustang. The all-NMRA final round for the two drivers, both from Kentucky, was ultimately postponed due to rain and will instead be run at the following event in the series tour in Norwalk, Ohio.

For the third time in as many races this season, Samantha Moore was the number one qualified driver in JDM Engineering Limited Street. The lady from Brighton, Michigan, coaxed a quick 8.212 at 167.09 mph pass from her supercharged ’14 Mustang. Moore didn’t make it to the finals, but the number two and four qualified drivers, Chad Wendel and 2020 champion Bill Putnam, respectively, did the deed with their ’07 and ’94 models. Although it was set to be an exciting final, the results will have to wait as rain put a hold to the final round fun for the day.

In G-Force Racing Transmissions Coyote Stock, Pennsylvania-based hotshoe Nathan Stymiest earned the number one spot when his ’92 Mustang buzzed the clocks with a 9.640 at 138.64 mph pass. Stymiest bowed out during the elimination rounds, but Randy Soper who had qualified second with his ’04 Mustang Mach 1 and Kevin McMullin who had qualified sixth in his ’94 Mustang both hustled hard enough to enjoy trips to the finals. Their journeys, however, were cut short by the weather and the two men will have to wait it out to see who gets the Edelbrock Victor trophy at the next NMRA race on their calendars to be held in Ohio.

Mark Anderson was the quickest qualifier in Richmond Gear Factory Stock, his 10.101 at 130.63 mph trip besting the rest of the pack. Anderson, who hails from Downs, Illinois, advanced to the semi-finals where he defeated Derek Grove. Meanwhile, Justin Fogelsonger of Mont Alto, Pennsylvania, had qualified third and had a bye into the finals. The two were ready to put their ’86 Mustangs against one another for all the marbles, but the weather had other plans and the outcome will be determined at the next NMRA race in Norwalk, Ohio, instead.

ARP Open Comp’s drivers were all gunning for the top spot in qualifying, and Ronnie Haislip of Nolensville, Tennessee, earned the honors with a .002-second reaction time in his ’67 Mustang. The finals, however, hosted James Johnson Jr and Larry Geddes. Geddes’s ’90 Mustang had been running quicker than ever this weekend, but he slowed from his 10.55-second dial in to run 10.724 at 104.19 mph in the finals which enabled Johnson of Westland, Michigan, and his ’91 Mustang to take the win when the pair ran 10.229 at 131.48 mph on a 10.20 goal. 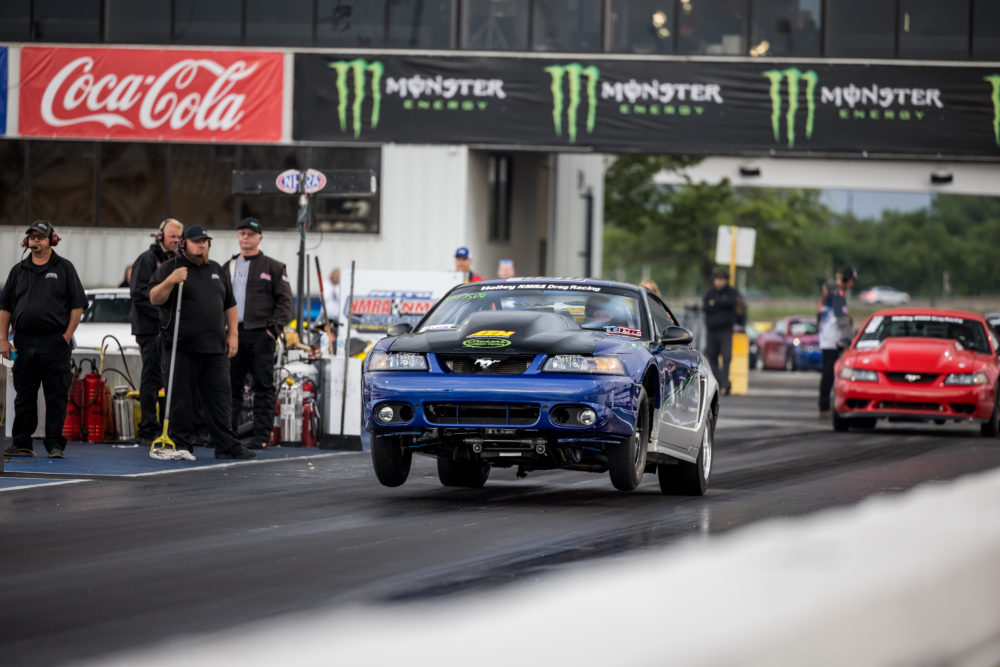 Index racing is alive and well in Exedy Racing Clutch Modular Muscle, and Lee Goetz cut a near-perfect light of 0.001-seconds in qualifying to have his name slotted into the number one spot. As always, eliminations whittled the field down to the fiercest of the pack, with the familiar faces of Adam Cox of Kentucky and Charlie “The Professor” McCulloch of Georgia rounding out the finals. In a rare slip, McCulloch fouled the start with his ’04 Cobra and lit the win light in Cox’s lane so that his ’99 Mustang could run out the back to victory with a 10.074 at 134.03 mph pass on an original dial in of 10.01-seconds.

Randy Rosner had the best reaction time during HP Tuners Super Stang qualifying, just 0.007-seconds away from a perfect light. In the finals, the class win went to Carleton, Michigan resident Andy Ransford (feature image) and his ’06 Mustang when Ransford ran close to his 13.45-second dial in with a 13.559 at 101.23 mph time slip. In the other lane, Kevin McKenna’s ’14 Mustang GT rolled the beams and its driver headed back to pack up and return to Indiana as the runner up. 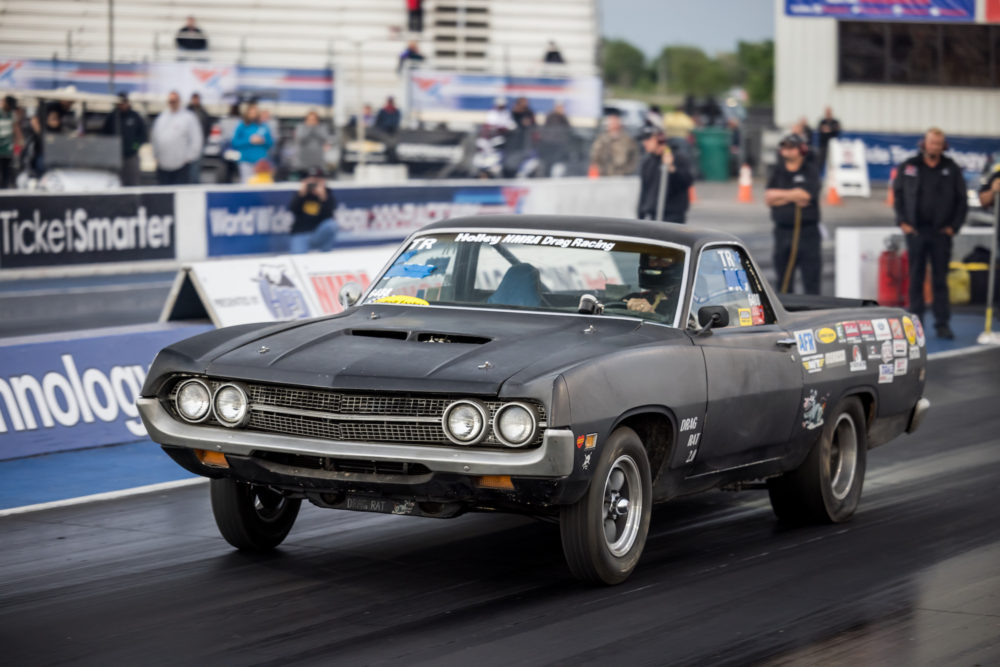 Last year’s champion, Bob Dill from Templeton, Pennsylvania, outgunned the rest of the Detroit Locker Truck & Lightning field in qualifying with his ’01 Ford F-150 and an 0.008-second light to qualify number one for the third race in a row. However, it the two drivers right behind him, Johnny “Lightning” Wiker and Mike Roup, who raced in the final round of eliminations. Wiker wanted the win with his ’99 Lightning, but his 8.700 at 157.93 mph pass on an 8.54 dial in wasn’t enough to hold off Roup’s run of 11.282 at 118.67 mph on an 11.23 dial in. Roup turned the win lights on in his lane, and Wiker was deemed the runner up.

Just 0.003-seconds off his 11.75 index, Lloyd Mikeska was the number one qualifier in RacePagesDigital.com Ford Muscle at the start of eliminations. He earned two round wins before going out in the semi-finals, while Danny Towe and Clyde Dunphy both were still in the show. In the finals, Georgia-based Towe took a trip to the winner’s circle in his ’70 Mustang when he ran 11.866 at 97.59 mph on his 11.75 dial in and Dunphy settled for second.

Competitors in QA1 True Street cruised 30-miles around the Illinois area, from Madison to Collinsville and back before making three back-to-back passes down the dragstrip. Winning the class outright was Greg Edwards and his ’02 Chevy Camaro on a three-run average of 8.147-seconds while Tony Karamitsos and his ’69 Camaro earned the runner up honors with an 8.245-second average. Finishing first for the 9-second group was Randy Thomas and his ’10 Ford Shelby GT500, right on the money with a 9.004-second average. Additional winners included Keith Seymore (10-second), Ernie Keppler (11-second), Del Holbrook (12-second), Rodney Ward (13-second), Amanda Jordan (14-second) and Chris Gaff (15-second).

The 2021 Holley NMRA Ford Nationals drag racing series continues at the Inaugural NMRA Ford Performance Nationals at Summit Motorsports Park in Norwalk, Ohio, on June 10-13 and both the NMRA and the NMCA will return to World Wide Technology Raceway in 2022 on May 12-15 for another epic installment of the NMRA/NMCA Super Bowl of Street-Legal Drag Racing. For more information and advance tickets, visit NMRAdigital.com.