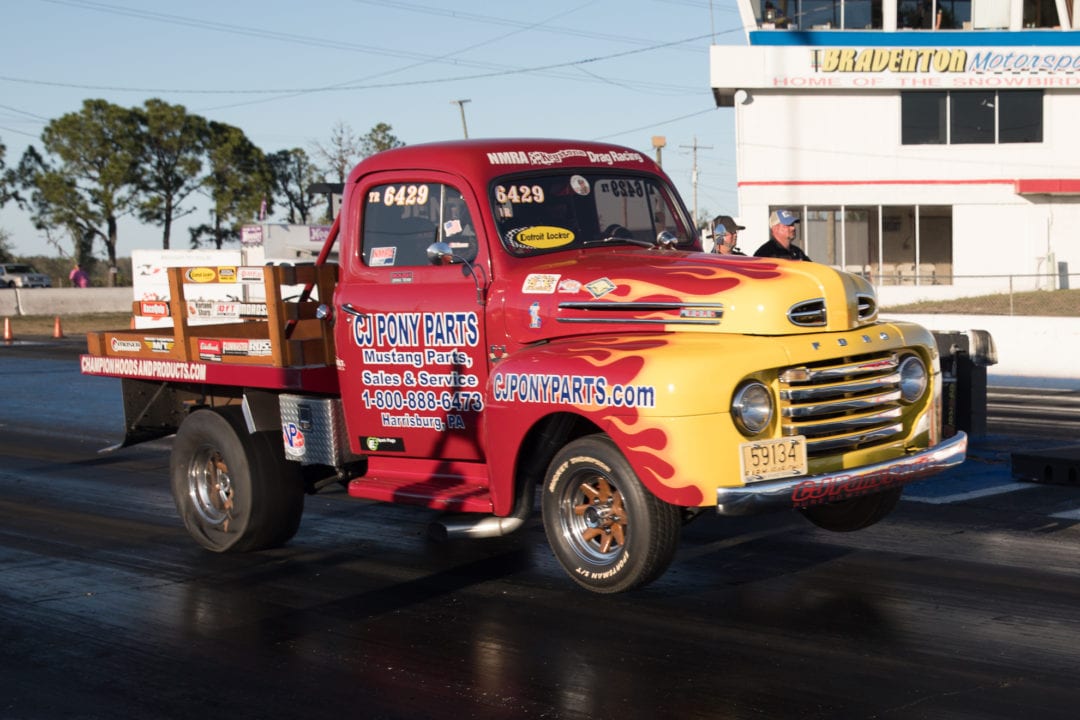 The 2018 NMRA Drag Racing season, presented by Keystone Automotive, debuted with beautiful weather, thousands of spectators, and all of the hot, record-breaking racing that one could want. QA1 True Street took center stage at Bradenton Motorsports Park this weekend, with a record 152 cars entering True Street. At the conclusion of the hotly contested, 16-car eliminator that is the JLT Performance Spring Break Shootout, True Street winner Randy Seward doubled up his wins by successfully defeating True Street runner up Jeff Bloem with an 8.80 to Bloem’s 9.48 elapsed time. 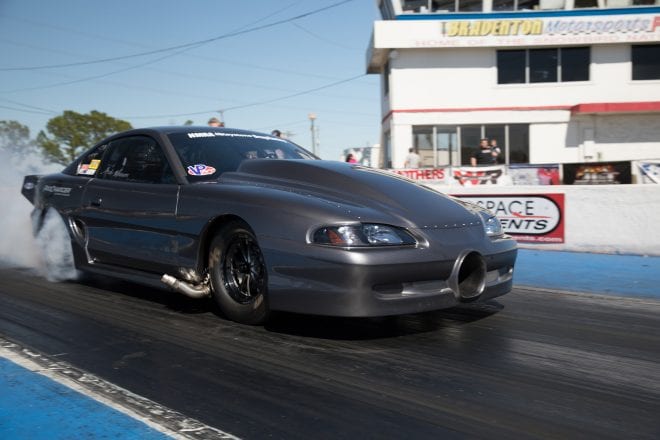 The quickest cars on the property belong to the VP Racing Fuels Street Outlaw class, and we saw Andy Manson, Charlie Cooper, and 2017 class champion Manny Buginga all laying down staggeringly quick times. Manson took the pole and would charge into the final against Buginga, who gave it his best shot by leaving first, but was passed by Manson who took the win with a 4.31 to Buginga’s off-pace 4.78.

In Edelbrock Renegade competition, it was Bart Tobener who took the trip to the Aerospace Components Winner’s Circle after Frank Varela tripped his red light at the start of the final round. Tobener had qualified his Coyote-powered S550 Mustang at the top of the list with a 7.33 elapsed time.

Haley James led qualifying in ProCharger Coyote Modified with an ultra-quick 7.59, and would pick off racers until she found her way into the final round. There, she faced 2017 class champion Tommy Annunziata and his Cobra Jet Mustang. Annunziata left first and charged hard at the top end, but James edged him out for the win, 7.62 to 7.65.

Brand new this year in the heads-up categories is the Steeda Limited Street class, and it did not disappoint one bit. Kelly Shotwell, who won last year’s Limited Street exhibition class at the NMRA World Finals, showed he was still the man to beat, qualifying first with an 8.61. Further down the list was Kent Nine who wasn’t nearly as quick, but was consistent throughout the weekend. In the final round, it was Shotwell with a lifting 8.83 to Nine’s 11.39.

In G-Force Racing Transmissions Coyote Stock, Darin Hendricks set the pace in qualifying, but it was Tyler Eichhorn who grabbed the holeshot win over Hendricks in the quarter finals, and Eichhorn who edged out Clair Stewart for the 10.23 to 10.32 win.

The competition was fierce in Richmond Gear Factory Stock and even top qualifier Mike Bowen was eliminated early on. In the final round, Dan Ryntz defeated John Leslie Jr., 10.45 to 10.71.

Race Star Wheels Ford Muscle saw Avon, Indiana’s Kevin McKenna cut Krystie Wagoner at the tree in the final round, and edged her out at the stripe for the class win and trip to the Aerospace Components Winner’s Circle.

Turning to Exedy Racing Clutches Modular Muscle competition, veteran racer Charlie McCullough squared off against another veteran racer in Gary Parker. Parker had the slightly better reaction time, but he broke out, running 11.06 on an 11.07 index, giving McCullough the win.

ARP Open Comp is always packed full of heavy hitters, and in the final round of competition, it was 2017 champion Dennis Corn who was victorious over Tim Hamilton.

In Detroit Locker Truck and Lightning action, Bob Cochran was victorious over James Steamer in the final round of eliminations after Steamer went -.008 red at the start.

Marvin Knack seems to be unstoppable in Roush Performance Super Stang competition. He’s won the class championship two years in a row, and was successful this weekend in defeating John Golliday in the final round of eliminations.

The Spring Break Shootout event plays host to a slew specialty classes, including the Ford Performance Cobra Jet Showdown that is presented by Watson Racing, Cobra Jet Challenge, ididit Outlaw True Street, the Terminator vs. GT500 Shootout, and the Hellion Turbo Coyote Shootout. It was a lucky victory in the Cobra Jet Showdown for Rod Heltzel, who suffered problems off the line, but watched as his competitor in the final round, Ken Miele, drove through the finish, broke out of his dial in and handed Heltzel the win. Gardner Stone won the Cobra Jet Challenge over Robby Mazza. Mike Jovanis, after lucking out with two bye runs in a row, won the eighth-mile, no-time ididit Outlaw True Street class over Jeff Bloem. The Terminator vs. GT500 shootout saw Paul Hardcastle and his 2003 Terminator Cobra victorious over Jon Pavia and his ’03 Cobra in a 9.31-to-10.26 win. There was no shortage of super quick Coyote-powered Mustangs in the Hellion Turbo Coyote Shootout, and in the finals, Christian Morillo had a better start, but Justin Jordan slipped by at the stripe in a 7.50-to-7.90 win. 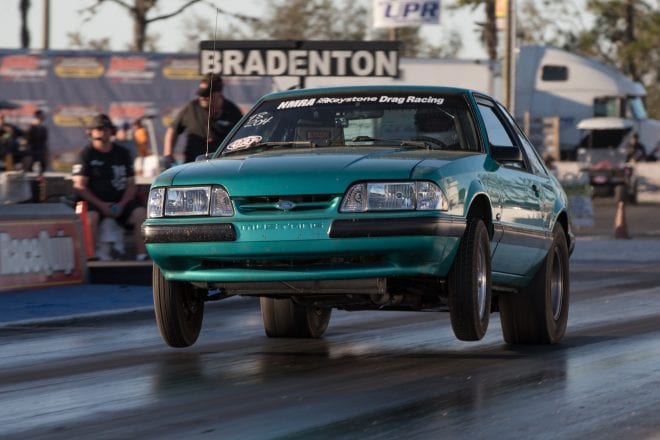 collected yet another victory in Florida. He took the Overall Winner title thanks to an 8.37 average (8.23, 8.42, and 8.45). The Overall Runner-up was Canadian Jeff Bloem, who finished the challenge with an 8.57 average. Other True Street class winners for the 2018 season opener include Don Julio (9-second), Carl DiBlasi (10-second), Connie Greiner (11-second), Robin Whiteford-Quinton (12-second), David Berry (13-second), Aaron Donton (14-second), and Rodney Ward (15-second).

The Tremec Stick Shift Shootout recognizes the top eight stick-shift cars in True Street. The regular big players in this class bowed out early, leaving the lane to the Aerospace Components Winner’s Circle open for Karl Goin and William Rinehart, who met in the final round. Rinehart grabbed the better reaction time, but it was Goin who got to the stripe first.

In Saturday bracket action, Jay Adams was victorious over Gage Burch in the B1 final round, while Charles Johnson wheeled his ’86 Mustang to the win over Robert Jones in B2. On Sunday, Darwin Garcia was the B1 winner over Jay Adams, while Gage Burch found the winner’s circle after defeating Ron Williams in B2.

The next stop on the NMRA tour is Atlanta Dragway (Commerce, GA) for the NMRA/NMCA All-Star Nationals presented by MAHLE, April 5-8, 2018.

If you would like to look at the raw data of each round of action, then follow the link to the Elimination results <<HERE>>