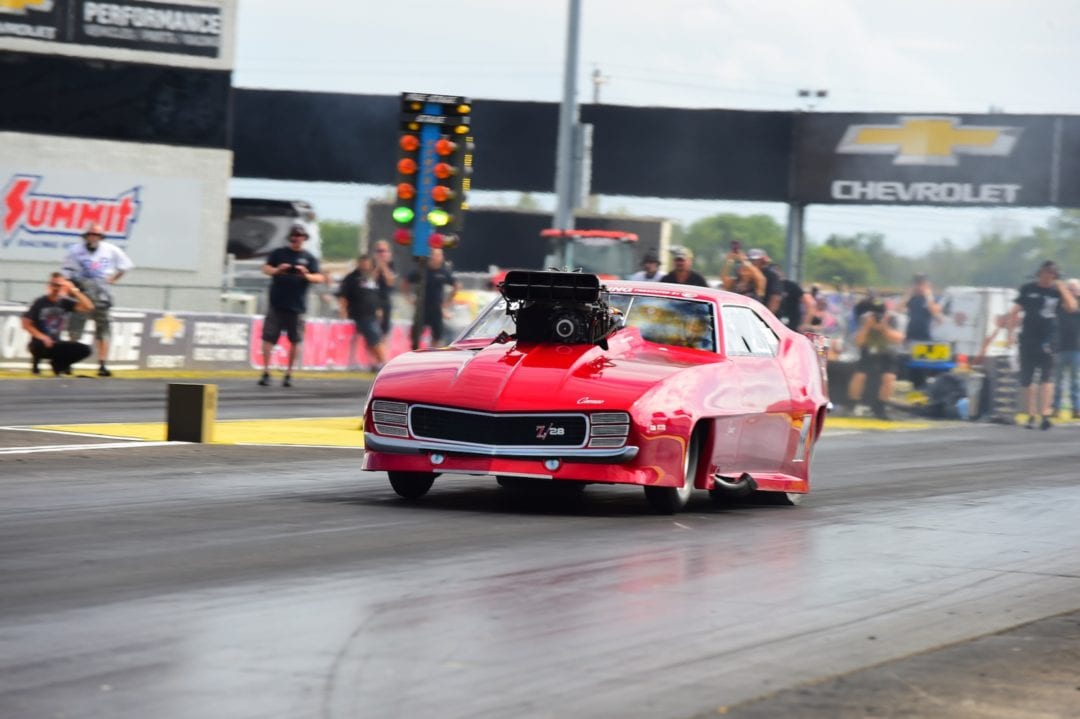 The competition was aggressive, all-out and astonishing at the final NMCA Muscle  Cars Nationals of the year, the 17th Annual NMCA World Street Finals presented by Chevrolet Performance at Lucas Oil Raceway in Indiana. There were wicked wheelies, powerful passes and plentiful personal bests as drivers were dead-set on cruising to the Aerospace Components Winner’s Circle and class championships.

In VP Racing Fuels Xtreme Pro Mod, Jason Hamstra, who had the points lead coming into the race, set the pace with a 3.71 in the all-3-second field. After much anticipation through the rounds, he and his bracket-like Camaro made it to the final round against Mike Recchia and his Camaro. Hamstra hauled to the win with a 3.70 after Recchia was forced to lift in the all-blower final round.

James Lawrence drove his Dragzine Corvette to a 3.84 to set the pace in Mickey Thompson Radial Wars, but the final round featured Marty Stinnett and his Mustang and David Adkins and his Impala. When the tree came down, both drivers leaped off the line, and Stinnett secured the win with a 3.94 after Adkins struck the tires.

“We struggled a little in qualifying and we were overpowering the track and spinning the tires, but we pulled it together in eliminations,” said Stinnett. “My little JBRE small-block Chevy tuned by Wade Hopkins of Southern Speed and Garrett turbos were working, and after wrecking the car two times this year, we are tickled and pleased with this win.”

In Vortech Superchargers Street Outlaw, Daniel Pharris drove to a 4.28 in his Mustang to lead qualifying, but making it all the way to the final were Shawn Ayers in the Gold Dust Mustang and Rob Goss and his Challenger. It was anyone’s race as both drivers worked to settle their cars at the hit, and as it turned out, Goss grabbed the win with a 4.37 to Ayers’ 4.48. It marked Goss’ first visit to the Aerospace Components Winner’s Circle in his NMCA career.

Holley EFI Factory Super Cars saw Geoff Turk take the lead in qualifying with a 7.98 in his Challenger, and he stayed on point through the final round where he ripped off an 8.06 to defeat Scott Libersher, who was all over the tree with a .001 but not quite as quick as Turk with an 8.20 in his Camaro. 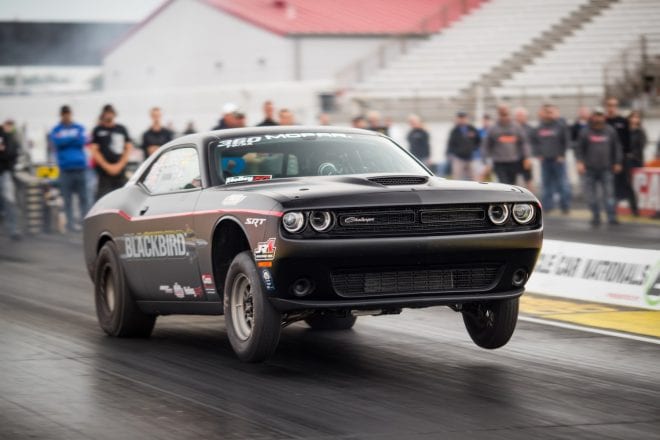 In ARP Nitrous Pro Street, Jordan Ensslin led qualifying with a 4.32 in his hard-leaving Trans Am, and he hung on through the final, where he picked up to a 4.31 to win over Pro 5.0 and Pro Stock standout Tony Gillig, who was not far behind with a 4.36 in his throwback Cutlass. It was Ensslin’s second straight visit to the Aerospace Components Winner’s Circle and his third win of the season.

Tim Knieriem tackled a 4.70 in his Mustang to take the lead in Edelbrock Xtreme Street qualifying, and later, Lou Iacopetti pushed to the final round against Bill Trovato. Iacopetti knocked out the win with a 4.75 in his Mustang and Trovato was not far behind with a 4.79 in his Camaro. 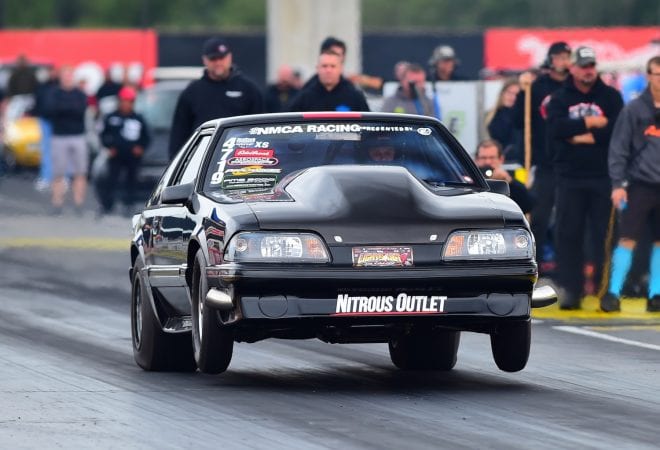 In the high-revving Fuel Systems Technology NA 10.5, Robbie Blankenship rocketed to a 7.80 in his Mustang to lead qualifying, and later was to face Leonard Long and his Mustang in the final. When Blankenship couldn’t make the call to the lanes, Long, who could have merely broken the beams to take the win as he was unopposed, chose instead to put on a show while pounding pavement, and posted a 7.86.

Haley Rounsavall hightailed to a 10.19 in her Camaro to lead qualifying in Chevrolet Performance Stock presented by Scoggin-Dickey Parts Center, and she advanced to a final round fight against Jesse Wilson and his Camaro. There, Wilson took the win with a 10.17 to Rounsavall’s 10.24.

In Coan Engineering Stock/Super Stock, Dennis Breeden led qualifying with a 9.38 on an 11.00 index in his Challenger, but the final round belonged to Dan Condon and Robbie Harrison. When the dust settled, Condon collected the win with a 10.27 in his Camaro and Harrison hung on for the runner-up with a 10.43 in his Chevy II.

Brent Wheeler wheeled his Coronet to a 9.75 on a 9.75 index to lead qualifying in ATI Nostalgia Super Stock, and later in the weekend, he wound up in the final round against Ryan Goodin. Goodin got the win with a 12.00 in his Belvedere, while Wheeler was the runner-up with a 9.76.

The NMCA’s winningest driver, Andy Warren, wound up with 10.25 on a 10.25 index in his Caprice to lead Detroit TrueTrac Nostalgia Muscle Car qualifying, and he remained strong through the final round, where he won with a 10.26 over Aubrey Baize, who turned in an 11.72 in her Dart.

John Voshell saw the tree to the tune of 0.000 in his Mustang to lead MagnaFuel Open Comp qualifying, but Mike Roup and Woody Pack put themselves in the final round, where Roup won with an 11.80 on an 11.80 dial in his Ranchero, while Pack, who recorded a comparable reaction time to Roup, ran 9.70 on a 9.67 dial. 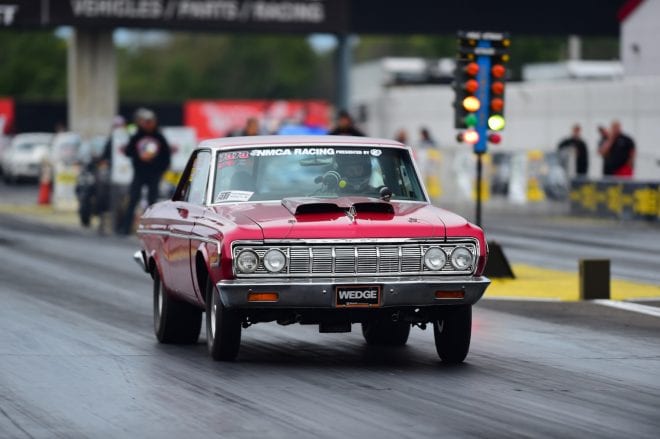 In the Chevrolet Performance Street Car Challenge, Jerry Frey flew to the overall win with a 10.33 average and Kevin Rowand was the runner-up with an 11.40 average. Also in the spotlight were James Benge with the 11-second win, Johnny Dwong with the 12-second win, Chris Roll with the 13-second win, Steve Weigl with the 14 second win and Stephen Panich with the 15-second win.

Officials are carefully counting points in each category, and then champions will be officially declared and celebrated on the NMCA Website, in Fastest Street Car magazine and during the NMCA Awards Ceremony presented by Aerospace Components, December 7, 2018 at the Indiana Convention Center, in Indianapolis, Indiana.

Drivers will fire up for a new season of NMCA racing at the 17th Annual Muscle Car Mayhem, March 7-10, 2019 at Bradenton Motorsports Park in Florida.