Danny Rowe started his 2016 NHRA J&A Service Pro Mod Drag Racing Series season by qualifying in the 15th spot in Gainesville. But even after just slipping into the field, Rowe posted a strong runner-up finish to get his year started on the right foot.

It also further backed Rowe’s longstanding belief that anybody who qualifies on a particular weekend is capable of winning the race. It’s a nod to not only Rowe’s own impressive skills, but also those of everyone in the talented and deep NHRA J&A Service Pro Mod Drag Racing Series class.

This second of 10 events in 2016 takes place as part of this weekend’s 29th annual NHRA SpringNationals at Royal Purple Raceway, and Rowe knows he will have to face off against another incredible Pro Mod lineup in his late model Agave Underground Tequila Corvette. 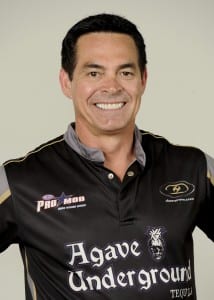 “First off, I’m obviously very biased, but I think we have the best Pro Mod cars, drivers, tuners and crews in the world racing here,” Rowe said. “You have to be a legitimate badass to even qualify among this group. We have people all over the world that want to race with us and be a part of this program. I believe that it takes many ingredients to make this work, but at the heart of it are a lot of loyal people working tirelessly to grow this class via the Real Pro Mod group.

“We have a great television package this year, which I think will only get better and better, and we have a lot of great sponsors that have supported us over the years and helped get us to this point. The fan following for Pro Mod is undeniable, and it’s growing. There’s something special happening here, and I’m just happy to be a part of it and see what will happen next.”

Rowe will try to win at Royal Purple Raceway for the third time in his career after previous victories in 2010 and 2012. Trying to prevent that is a loaded lineup that includes two-time world champion Rickie Smith, who knocked off Rowe in the final round in Gainesville, Bob Rahaim, Mike Janis, 2010 champ Von Smith, Bill Glidden and two-time and defending champ Troy Coughlin.

But that just scratches the surface of the talent level competing in Houston, and that has often brought out the best in Rowe, who has five career NHRA Pro Mod victories and finished seventh in points a year ago.

The massive growth of the class over the last few years continues to excite Rowe and he continues to prepare himself diligently to contend for a world championship.

“I love drag racing; I have a tremendous passion for this sport,” Rowe said. “So, I’m dedicated to being the best driver that I can possibly be. To me that means staying in shape and working on things that I think will make me prepared for what happens inside the car. The hard thing for me is to let things happen. In business I always want to feel in control. In the race car you have to learn to react. So, sometimes I’m my own worst enemy. I’m constantly having to remind myself to just enjoy what we are doing and let things happen.”

Rowe rose to the occasion in Gainesville after qualifying at No. 15, putting together two of his best times of the weekend in the quarterfinals and semifinals. His top run of the weekend actually came in the final, where he ran 5.869 in his white supercharged Corvette and fell by a narrow margin to Rickie Smith.

It’s a good sign for Houston and Rowe likes the potential his team has already displayed. There are still challenges to overcome in a rigorous class, but Rowe and his team aren’t afraid of the work required to perform at a championship level.

“It’s been a great start to the season,” Rowe said. “The race in Gainesville was a strong first outing for the team. We had a little bit of work to do in getting this basically brand-new race car driving right, but it really came around quick once we started to make some moves.

“As a driver, once you have confidence in the car it really makes it easier for you to focus on what you need to do behind the wheel. I think we have a great program right now. We’re confident that our team has everything we need to be great. We just have to do the best we can and I believe we’ll be there at the end of the season competing for a world championship.”