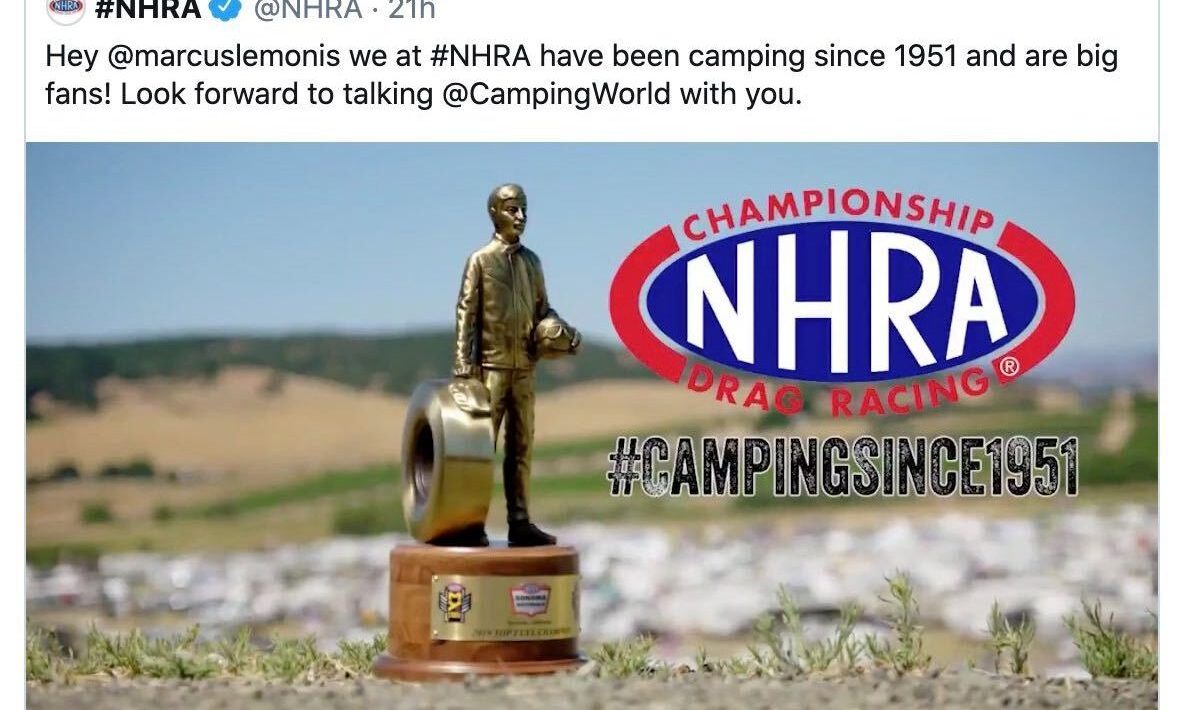 Tuesday may have marked one of the most unique days in drag racing history — the first sponsorship courtship by Twitter.

In a stunning turn of events that played out in a wildly entertaining fashion, the NHRA – through its social media page — openly expressed a desire to do business with Camping World after its CEO, Marcus Lemonis, hinted at his company’s own interest to do business with the NHRA Drag Racing Series.

Hey @NHRA we at @CampingWorld aren’t scared of our commitment to racing.. let’s sit down and talk sponsorship.. we’re good for it, just ask your friends at @NASCAR pic.twitter.com/IxwBfGk6Wl

With NHRA filing a lawsuit against Coca-Cola on Monday, this served as perfect timing for the drag racing series, which was sent reeling after alleging Coca-Cola broke a title sponsorship agreement with the NHRA.

That contract was slated to run through 2023, with the current six-year program calling for an annual payment of $5.72 million per year. It appeared to be another crushing blow to NHRA in a 2020 season that has seen a number of cancelled events and drastically reduced purses due to the public health crisis, but Lemonis and Camping World could be coming to the rescue.

At least, that’s what many in the NHRA circles — including racers, teams, fans and announcers — are hoping for after his initial tweet Tuesday morning.

His “we at Camping World aren’t scared of our commitment to racing” seemed like a scathing dig at Coca-Cola, which reported massive losses and huge layoffs during the second quarter of 2020 in the midst of the COVID-19 pandemic, apparently deeming cutting ties with NHRA as another necessary cost-saving measure.

He wanted to talk sponsorship with NHRA, noting their good standing with NASCAR, where Camping World had been the NASCAR Truck Series sponsor for 10 years and will resume that position next year.

The initial tweet got drag racing circles buzzing, with many believing the pairing of NHRA, Camping World and RVs a natural fit.

I know I’ve spent lotsa 💰 at @CampingWorld to support a sponsorship.
Two GREAT things will come out of this crazy 2020 for @NHRA fans.
The @FOXSports 📺 announcement and our new series sponsor 👏👏 https://t.co/5hRNyW7YTJ

There is a huge opportunity for multiple sponsors out there! @CampingWorld would be a great fit. @NHRA is a great partner. I’ve seen how hard they work. #NHRA #DragRacing https://t.co/GCvR9OaAsy

The next bit of shocking news came with NHRA’s reaction, which didn’t hide its feelings on Twitter. It’s a bold move for a professional sports organization, but the enjoyable back-and-forth was seemingly well-received by all as the potential courtship played out in real time on social media.

Hey @marcuslemonis we at #NHRA have been camping since 1951 and are big fans! Look forward to talking @CampingWorld with you. pic.twitter.com/PbzgkQepsG

Lemonis had his own response, NHRA reciprocated and it seems like the world’s biggest drag racing organization may have potentially found a new title sponsor in what could be a huge stroke of luck.

It’s worth noting the entertaining, very public conversations don’t mean a sponsorship has been discussed or is even a possibility at this point. Sources also told Drag Illustrated this wasn’t a planned conversation, but rather something nobody saw coming and both parties simply reacted on the fly on the heels of Monday’s massive news.

I’m a deal maker. Are you ? Keep it simple, drive results for our business, introduce us to new customers, database sharing etc … ? https://t.co/XlXmxCTDFW

Of course, major questions need to be answered — and maybe quickly and immediately. NHRA needs a title sponsor if the partnership with Coca-Cola, which has sponsored the company since 2002, does indeed fizzle out. NHRA alleges that Coca-Cola missed a $2.86 million payment in May, and intends to “hold Coca-Cola to its contractual promises.”

Along with that, president Glen Cromwell stated, “We are excited about our return to racing continuing into 2021, our 70th anniversary year, with a strong race schedule, and we will do that in partnership with some of the best sponsors in sports.”

But, without question, NHRA will need a title sponsor — or perhaps several — to replace the nearly $6 million it was due to receive from Coca-Cola.

Would Camping World entertain paying anything close to that number? That’s to be determined, but after watching a budding love affair play out on Twitter between two companies that seem to make sense together, it’s not hard to be excited about the possibilities.

Momma Kay & Billy camp every weekend at the track!

Considering how many drag racers on all levels of @NHRA have RV’s and the number of fans that camp at events, I believe it’s a good fit. @marcuslemonis should pay a visit to @WWTRaceway next week for the #MidwestNationals – Tickets are on sale now 618-215-8888 https://t.co/1NFiyyAY1g