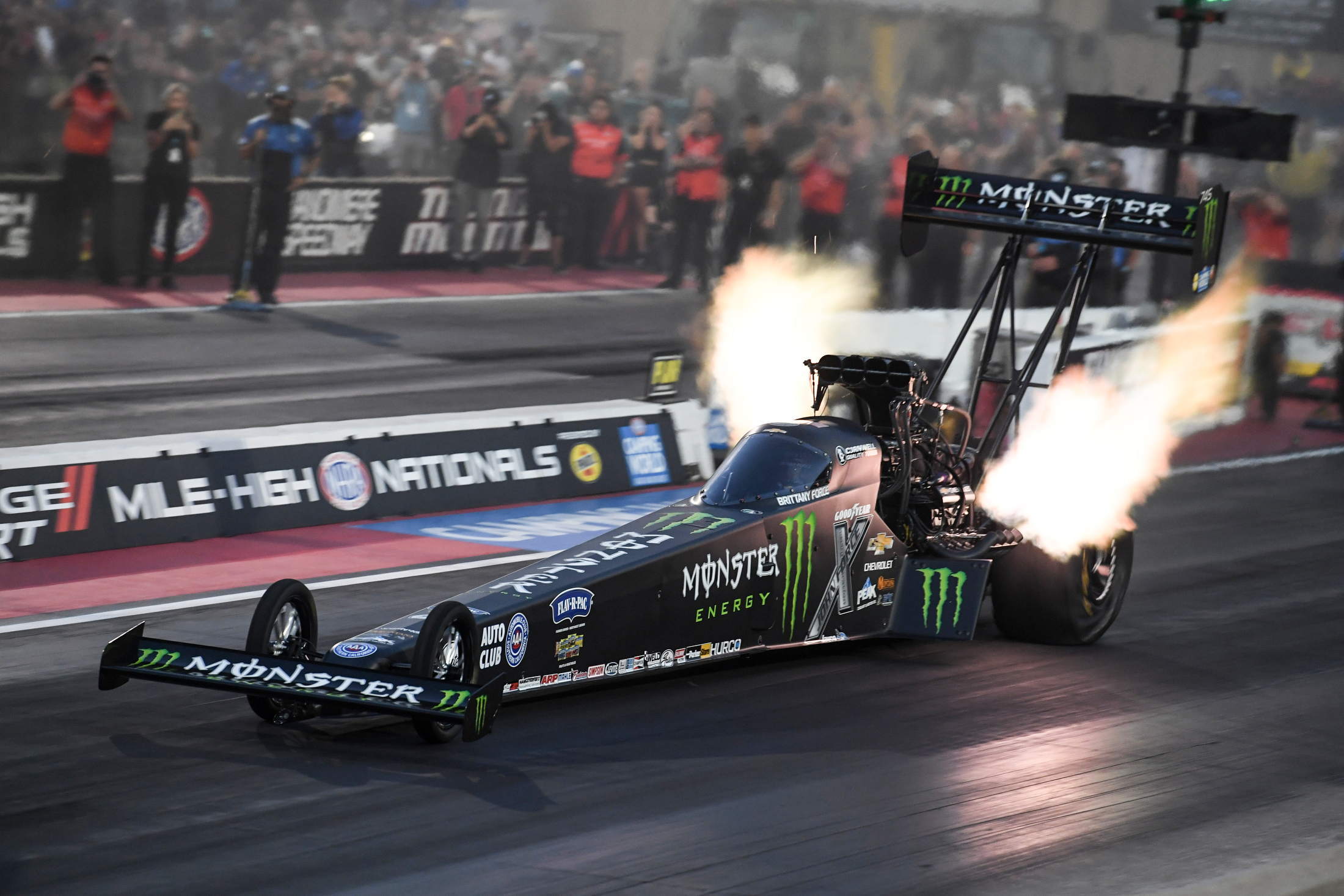 It is the 11th of 22 races during the 2022 season, as the NHRA reaches the halfway mark of the year and kicks off the famed three-race NHRA Western Swing that also includes stops at Sonoma Raceway in Sonoma, Calif., and Pacific Raceways in Seattle.

The race at Bandimere Speedway has been considered a special event for more than four decades, with competitors racing at an elevation of nearly 6,000-feet in front of a packed house in Denver. The elevation affects everything from engine tune-ups to aerodynamics, posing one of the biggest challenges of the year, but racing in the Rocky Mountains also provides some of the biggest thrills of the racing season. This year, fans will get to enjoy the excitement of 330-mph racing under the lights on Thunder Mountain, four rounds of qualifying and then final eliminations on Sunday.

Torrence has won the last two Top Fuel races in Denver, showing his skills on Thunder Mountain with victories in 2021 and 2019. The four-time defending world champ will look to continue his dominant Denver run with yet another victory, which would give him his first win of the season. Everyone is currently chasing Mike Salinas, who took over the points lead in Norwalk and has rattled off four wins in 2022. He has championship aspirations, as does Brittany Force, who has three wins this year, three-time race winner Tony Schumacher, Antron Brown, 2018 winner Leah Pruett, veteran Doug Kalitta, Justin Ashley, who has two wins this year, Josh Hart, and Clay Millican.

Funny Car’s Hagan finally cashed in at Denver a year ago, winning a race that had been on his bucket list for years. The three-time world champ has been impressive this year as well, winning three races and holding the points lead for the bulk of the season. But Robert Hight took over the lead with a win in Norwalk, his fourth of the season, and the standout will aim for a fifth Denver victory. Others to watch include eight-time race winner John Force, defending world champ Ron Capps, Alexis DeJoria, Bob Tasca III, two-time race winner Cruz Pedregon, Tim Wilkerson, and J.R. Todd.

Pro Stock returns to Denver and Bandimere Speedway for the first time since 2019 and everyone is chasing points leader Erica Enders, who has been on a dominant run to open the 2022 season. The four-time world champ has five wins thus far and will look for her first career win on Thunder Mountain. Trying to prevent that are a host of title contenders, including reigning world champ Greg Anderson, who is after career win No. 100, Aaron Stanfield, who has two wins this season, Gainesville winner Dallas Glenn, Kyle Koretsky, rookie Camrie Caruso, local resident Deric Kramer and Bo Butner.

The event also will feature thrilling competition in the NHRA Lucas Oil Drag Racing Series, which includes some of the sport’s top drivers, as well as the Mile High No Time Big Tire Shootout. After nitro qualifying on Friday and Saturday, fans can enjoy a spectacular jet car racing exhibition featuring the Team “Muy Caliente” Jet Cars and the Earthflight Jet Dragster. There will be a special fireworks display after racing on Friday and Saturday as well. The race also features the NHRA Summit Racing Jr. Drag Racing League shootout, with eight young drivers competing for the win. The final round will take place on Sunday and will be featured during the FOX broadcast.

Race fans at Bandimere Speedway can enjoy the special pre-race ceremonies that introduce and celebrate each of the drivers racing for the prestigious Wally on Sunday and includes the fan favorite SealMaster Track Walk. The final can’t-miss experience of any NHRA event is the winner’s circle celebration on Sunday after racing concludes, where fans are invited to congratulate the Dodge Power Brokers NHRA Mile-High Nationals event winners.

As always, fans also get an exclusive pit pass to the most powerful and sensory-filled motorsports attraction on the planet in Denver. This unique opportunity gives fans a unique chance to see teams in action and service their hot rods between rounds, get autographs from their favorite NHRA drivers and more. Fans can also visit NHRA’s popular Nitro Alley and Manufacturers Midway, where sponsors and race vendors create an exciting atmosphere that includes interactive displays, simulated competitions, merchandise, food and fun for the entire family. The new Pep Boys midway display will include tire change challenges, oil change challenges, a slot car track and much more, adding even more excitement to the midway.