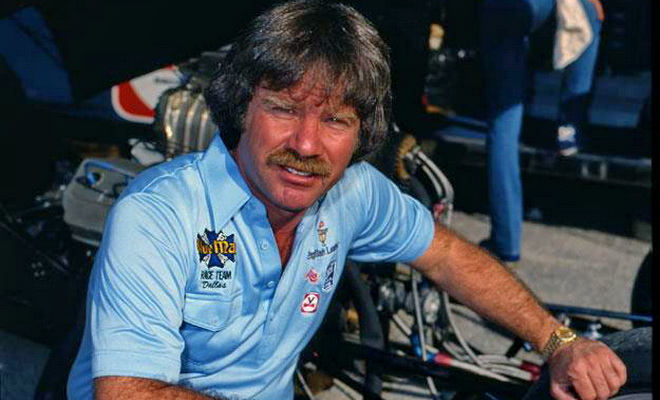 Beadle, who got his start in NHRA in the early 1970s driving for team owners Prentiss Cunningham, Mike Burkhart and Don Schumacher, started his own team with Harry Schmidt in 1974 and the duo raced to 13 NHRA national event victories in 28 final round appearances and won world championship titles in 1979, 1980 and 1981. He was a two-time winner of the Chevrolet Performance U.S. Nationals, claiming victories at the world’s most prestigious drag race in 1975 and 1981.

The Spur, Texas, native’s first world championship title in ’79 ended Don “The Snake” Prudhomme’s four-year reign of Funny Car dominance. Beadle is one of only four Funny Car drivers in NHRA history who have won at least three consecutive championship titles. His Blue Max Funny Car was one of the most popular machines on the national drag racing match race circuit and he is widely credited with being the first in motorsports to sell team branded souvenirs such as T-shirts and hats.

Beadle also was successful in other forms of motorsports. In 1989 he and driver Rusty Wallace teamed to win the NASCAR Cup championship. Before that his NASCAR team featured Tim Richmond as driver. He also fielded a World of Outlaws sprint car for Sammy Swindell.

Beadle was named No. 20 on the list of NHRA’s greatest drivers through its first 50 years. In 1980 he was named to the American Auto Racing Writers & Broadcasters All-America team. Already a member of the International Drag Racing Hall of Fame, Beadle earlier this year was inducted into the Motorsports Hall of Fame of America in Novi, Michigan.

Once he retired from motorsports in 1990, Beadle operated cattle ranches in Texas and Arkansas as well as a farm for quarter horses. Prior to his death Beadle and his wife Roz resided in Dallas.