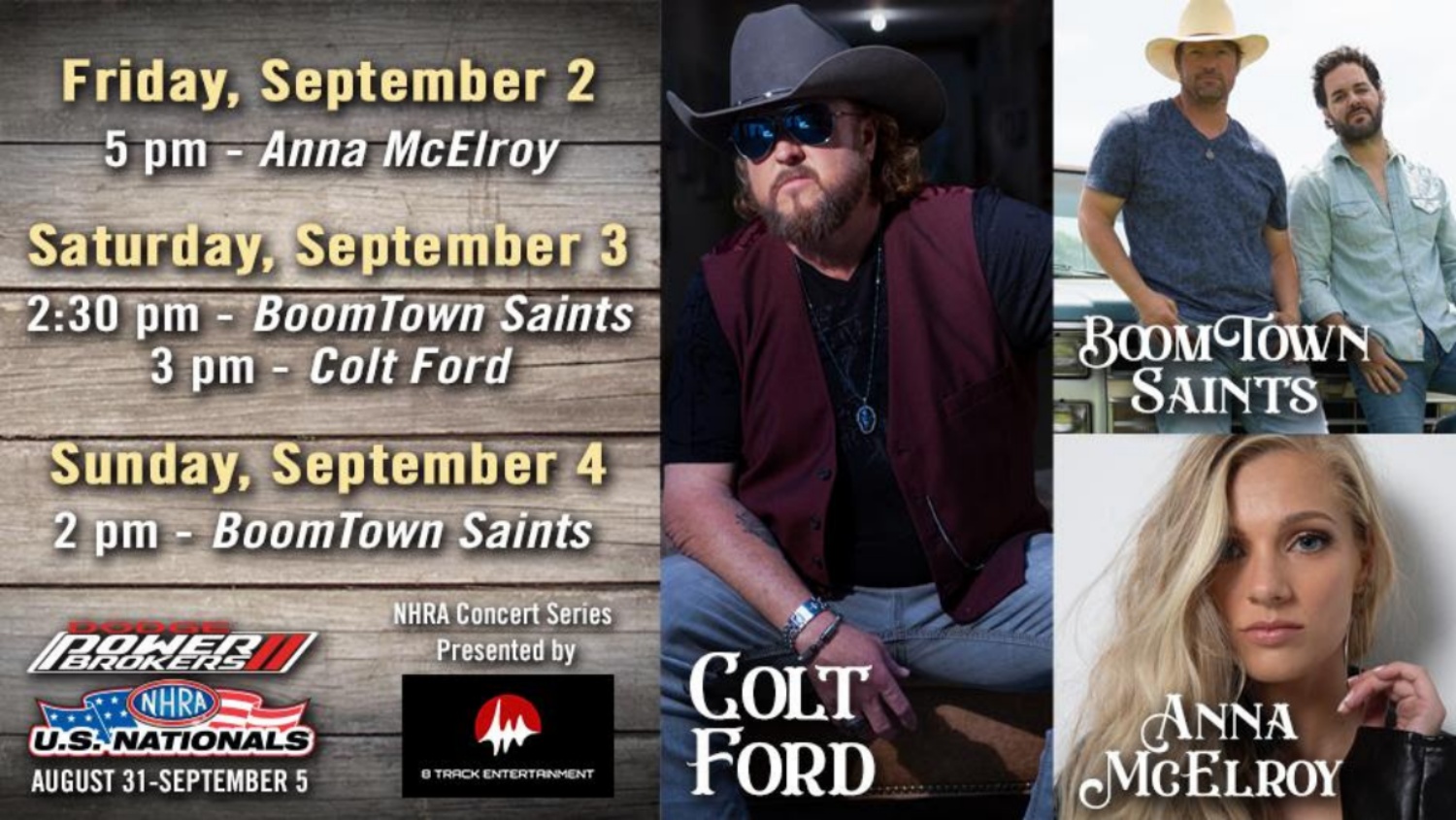 Along with the thrilling racing action NHRA fans expect from the prestigious Dodge Power Brokers NHRA U.S. Nationals, racer goers will also be treated to a star-studded concert as country superstar Colt Ford will headline at this year’s NHRA Concert Series Presented by 8-Track Entertainment.

As NHRA competitors gear up for the NHRA U.S. Nationals, the musical talents of Ford on Saturday, September 3, at 3:00 p.m. as well as rising star Anna McElroy on Friday, Sept. 2 at 5:00 p.m., and country rock-duo BoomTown Saints on Sunday, Sept. 4, at 2:00 p.m. amp up to perform for the NHRA fans at Lucas Oil Indianapolis Raceway Park.

Headliner Ford is a Georgia native and a singer, songwriter, rapper, musician and performer and keeps up pace as the country’s preeminent independent maverick. Selling over three million albums, attracting millions of followers on social media and hitting one billion-plus streams, the country rap pioneer’s dynamic discography spans collaborations with Toby Keith, Brad Paisley, Keith Urban and Jermaine Dupri as well as members of No Doubt, Lit, and Lady Antebellum. Additionally, he co-wrote No. 1 hits “Dirt Road Anthem,” and “Country Must Be Country Wide,” with artists Jason Aldean and Brantley Gilbert respectively.

Kicking off the weekend’s entertainment is up-and-coming musician McElroy. A talented singer and songwriter, McElroy’s passion for music commenced at age four when she began singing. A native of Alabama, she has opened for such country artists as Lee Ann Womack, Joe Diffie, Jon Langston and Clay Walker.

Hot country duo BoomTown Saints opens for Ford on Saturday and will also take the stage on Sunday. Their innovative artistry, elite musicianship and precise multi-part harmonies makes their high-energy show exceptional from the very first song. Their brand of southern rock/rocking country continues to resonate with a growing fan-base as they crisscross the country entertaining audiences nationwide celebrating the release of their debut single, “All Trucks Go to Heaven.”