“We could not be more excited to announce this new program and renewed relationship with Briggs & Stratton,” said Josh Peterson, vice president of racing administration, NHRA. 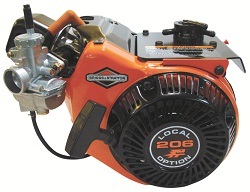 “The program will greatly reduce the entry level costs for families to get involved in the sport and stimulate the growth of the NHRA Summit Jr. Drag Racing League.”

Briggs & Stratton launched the 206 crate engine program in 2008 to give racers a simple out-of-the-box, cost-effective, performance solution.  Building from the proven reliability of the Animal racing engine, the 206 crate engine maintains a level playing field by isolating the performance variables commonly found in standard, mainstream manufacturing.

Each 206 crate engine is hand-built in a dedicated facility to exacting standards and measured against a factory developed rule set.   The end-result is a performance racing engine with the proven repeatability that has led to four years of world-wide wins at the highest levels of racing right out of the box.

“We are incredibly excited to once again have the opportunity to work with the NHRA and their Jr. Drag Racing League” said David Klaus, director-Briggs & Stratton Racing.

“As one of the original founding partners we were able to help be a part of the growth of the league as well as get to know the racing families involved.  This sport makes great racers but it also helps make family memories.  That is something that Briggs & Stratton Racing loves to be a part of and we look forward to the future.”

“NHRA’s acceptance of the 206 crate engine is a great opportunity for us to support the league with a new option for cost-effective racing,” continued Klaus. “Families now have another cost-effective option to help build memories that will last a lifetime.”