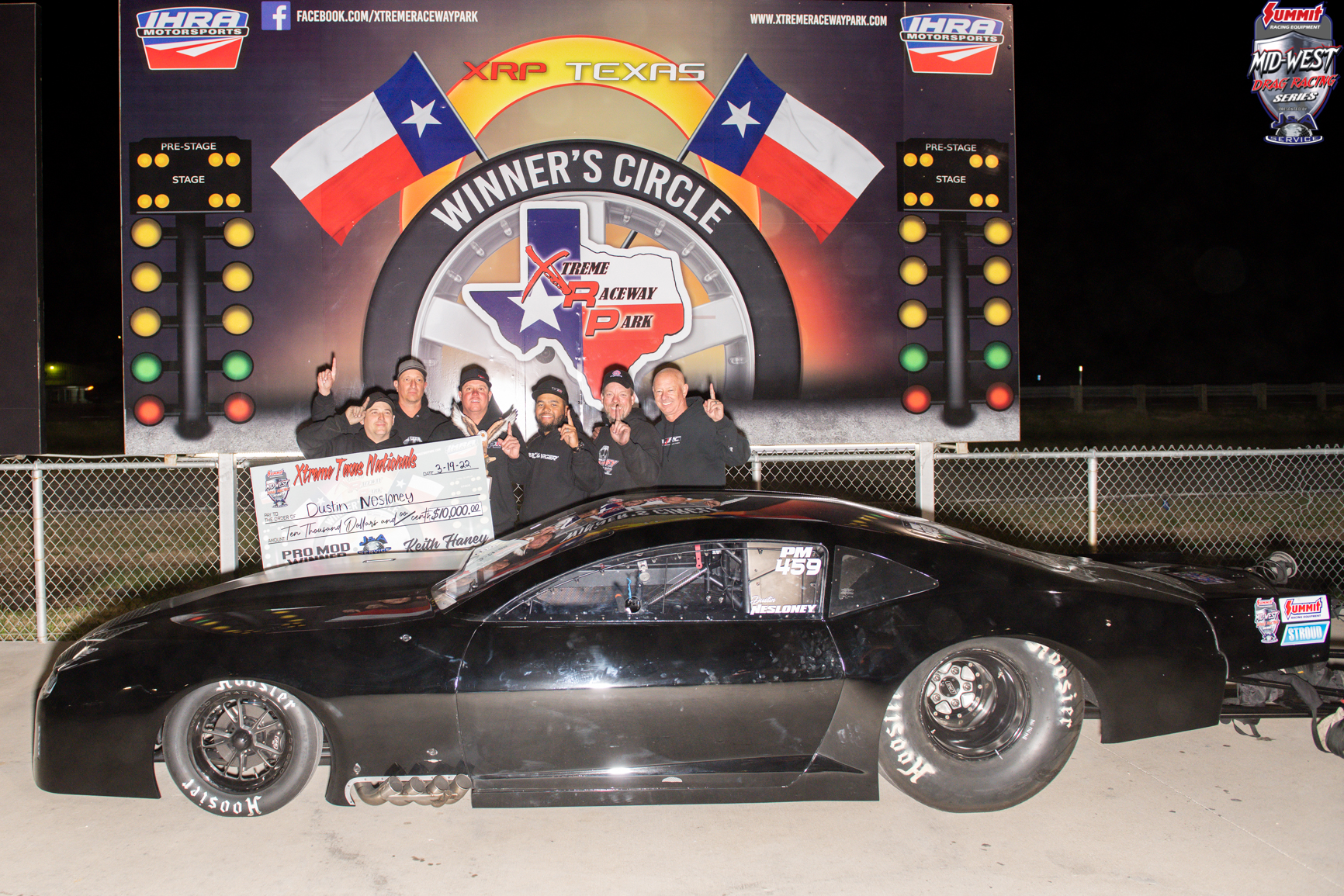 Stroud Safety’s Tommy Cunningham earned the event win in Slammers, the second-chance race for Pro Mod competitors who don’t qualify or lose in the first round.

At the 2021 MWDRS season finale, Dustin Nesloney won the second-chance Slammers race after losing first round in Pro Mod. An offseason later, Nesloney’s position completely reversed, as he raced through the toughest field in MWDRS Pro Mod history to grab his first Pro Mod win. Nesloney used a holeshot advantage and a 3.579 at 209.21 mph to defeat Daniel Pharris and his 3.577 at 211.07 in the final round.

“It hasn’t really set in yet,” Nesloney said. “There were 29 cars that showed up and we ended up qualifying sixth and when it was all said and done we walked away with the win. It was just a heck of a race. It came down to the tree. It hasn’t sunk in yet. We come from the boat racing world and this is my first true victory in the car.”

On the other side of the ladder, Pharris was continuing to perform at the high bar he set as the No. 1 qualifier in his Steve Petty-tuned, ProCharged GALOT Motorsports ’69 Camaro. He won first round with a 3.658 at 208.33, then improved to a 3.60 at 208.43 to eliminate series founder Keith Haney in the second round. Pharris then laid down low E.T. of eliminations, a 3.576 at 210.97, to win over Taylor Lastor, who was disqualified after shutting off after the burnout.

In the final round, the pair of Proline-powered drivers recorded the quickest side-by-side pass in MWDRS Pro Mod history.

“The final was just unbelievable,” Nesloney said. “I didn’t know we won at first because I got to the other end and I was calling Brandon on the radio and didn’t hear back. I knew I didn’t red light and I never saw Daniel. I got out there on him and never saw him. I went through the traps, got the car shut down, called them on the radio, then turned the corner and saw the light blinking on the scoreboard and was like, ‘OK, I guess we won.’ Our crew and Proline’s whole group had tackled Brandon and they were celebrating on the starting line. We came out with this car in October and it already has its first win.”

Nesloney was only planning on running around half of the eight MWDRS races this season, but his win at the season opener has him reevaluating that plan. 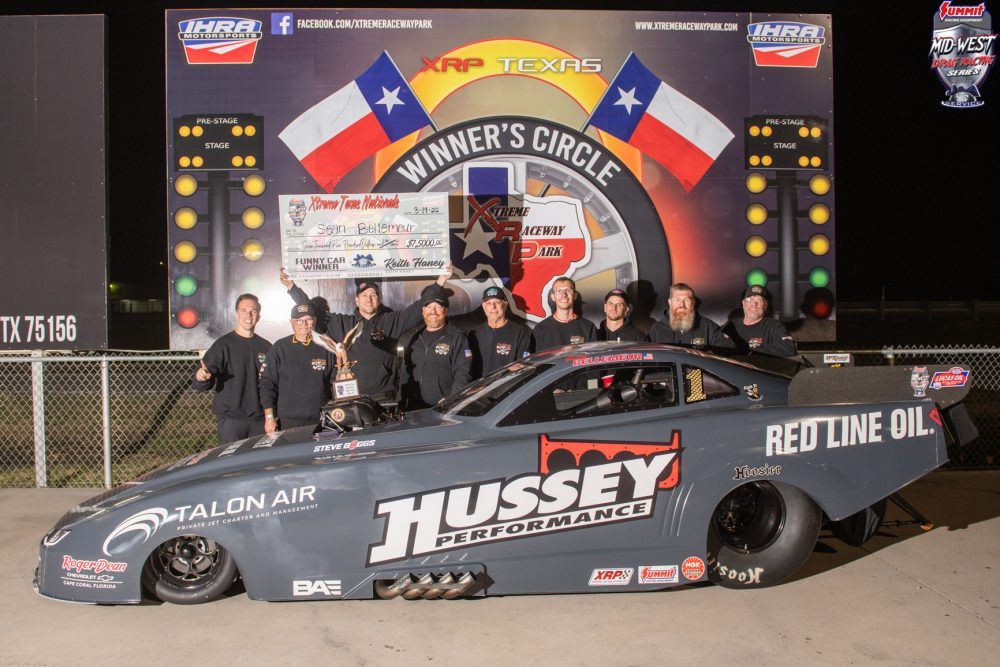 As the back-to-back and defending MWDRS Top Alcohol Funny Car champion, Sean Bellemeur was the odds-on favorite to win at the season opener. Bellemeur and the “Killer Bs” team, led by car owner Tony Bartone and tuner Steve Boggs, lived up to the hype, qualifying No. 1 and winning the event with a new series record in the final round. Bellemeur’s 3.56 at 216.66 defeated Annie Whiteley and her 5.292 at 93.48.

“We put a new car together over the winter and that thing has been absolutely flawless,” Bellemeur said. “It was really a picture-perfect weekend. The weather was great, the fans were great, the performances were really great. As far as my team and Steve and Tony, what else is there to say about them? They just continue to rise to the occasion. When the conditions throw you a fastball and you’re Steve Boggs, you hit it 450 feet. That’s exactly what he did.”

“You’re starting to see some cars step up,” said Bellemeur, who thanked sponsors Hussey Performance, Red Line Oil, Mastercam, Talon Air, and NGK Spark Plugs. “Annie ran a .59. Chris Marshall will tell you he’s ‘struggled’ and ran in the low .60s and really fast. The guys and gals were cutting killer reaction times. You could definitely see that they’re coming for us, and we welcome it. I think it’s really good for the class and it’s going to be really good for the Mid-West Drag Racing Series. There’s going to be some great racing all year long.” 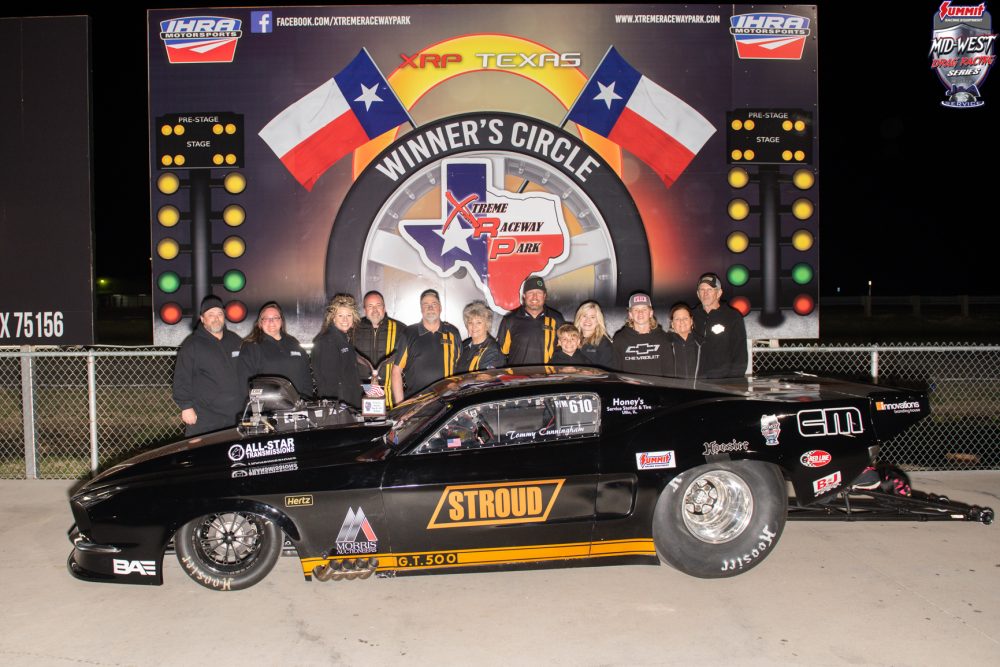 Tommy Cunningham missed the ultra-quick Pro Mod field in his screw-blown ’67 Mustang, but the Stroud Safety owner bounced back nicely with a win in the Slammers competition. He stepped up to a 3.703 over Robert Costa in the first round and picked up from there, ultimately ripping off a 3.664 to beat Tony Williams in the final round. 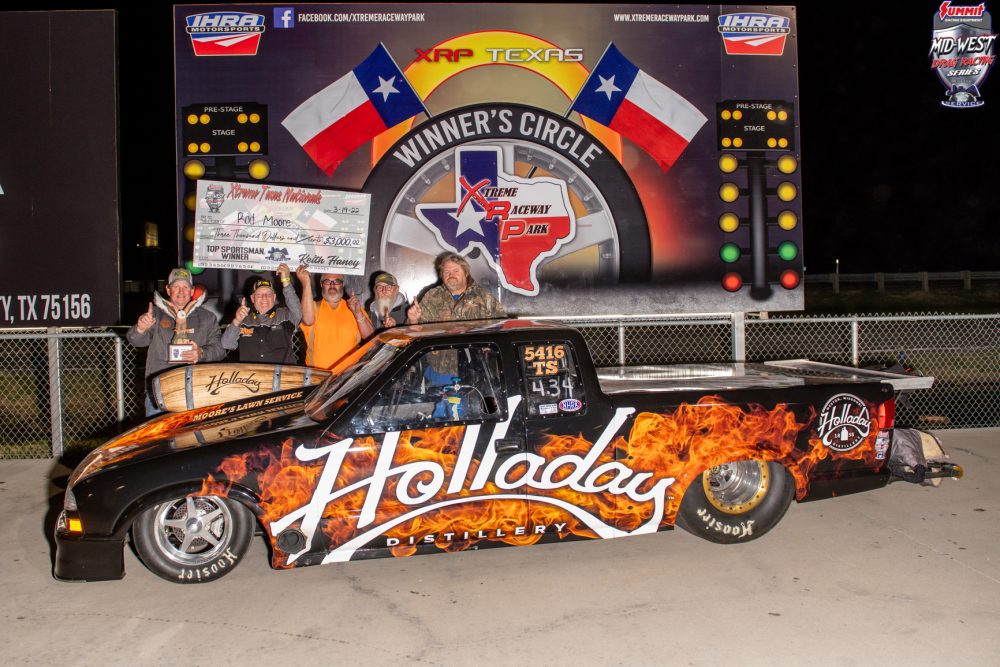 The Top Sportsman winner was decided on the starting line in the final round, as Waxahachie’s Melvin Goss left the line .012 too soon, allowing Rod Moore to race on to victory despite breaking out with a 4.318 on a 4.34 dial-in. Moore, who was the No. 3 qualifier, previously defeated J. Yates, Monte Weaver, and Kelly Land on the way to the final. 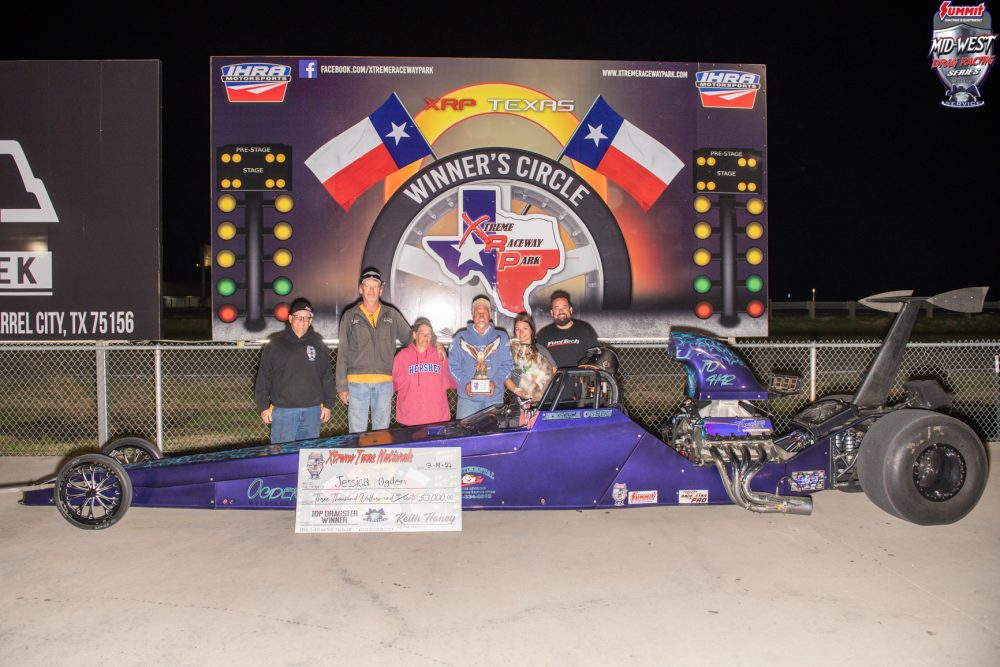 It was a big weekend for the Ogden family, as defending event winner Jessica Ogden picked up the win again in Top Dragster, while her father, James, qualified No. 1 in Top Sportsman for the first time. In the final round, Ogden used a .000 reaction time and a 4.379 on a 4.35 dial-in to defeat Rusty Baxter, who slowed from his 3.87 dial-in to a 4.891. Ogden defeated Jonathan McClain, Steve McDermott, and Chanse Bullock before getting a bye run in the semis.