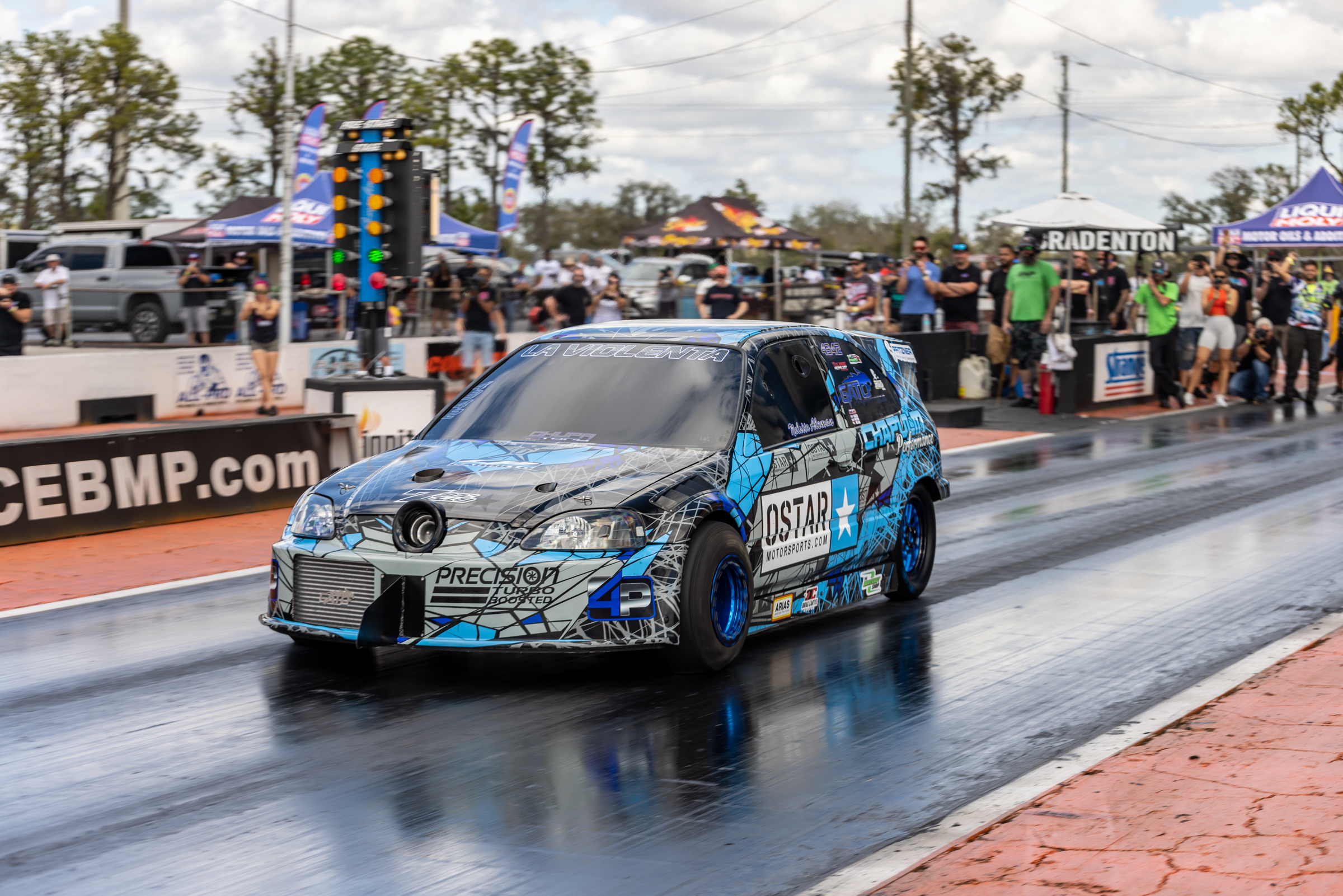 The father-son duo of Nelsito and Kevin Aleman swept the second annual Sport Compact Evolution presented by Ignite Racing Fuel at Bradenton Motorsports Park, as Nelsito raced to victory Sunday in Mapps Automotive Xtreme Front-Wheel Drive presented by Precision Turbo & Engine. The younger Aleman was the No. 1 qualifier in the headlining class on Saturday.

“I do this for the father-son time,” Nelsito Aleman said. “We both like it. He has his car, I have mine. We were the first and second fastest in XFWD this weekend. It’s an adrenaline rush I can’t explain when we race each other.”

The Alemans didn’t get to race each other at Sport Compact Evolution, but they were the quickest two drivers in the first round of eliminations. Driving his OStar Motorsports/Chapulin Performance ’99 Honda Civic hatchback, Nelsito fired off a 7.995-second pass at 181.86 MPH to beat Ryan Harmon, while Kevin ran a 7.876 at 183.82.

Nelson won in the semifinals with his 8.059 at 180.65, defeating Cesar Olin. Final-round opponent Minh Peoples wasn’t able to return for the final round, so Nelson idled down the track to close out the weekend as the Mapps Automotive XFWD presented by Precision Turbo winner.

“We’re used to winning, but this race was harder because of rule changes and everybody protesting our cars,” said Aleman, who thanked OStar Motorsports, Arias Pistons, Gato Performance, PPG Transmissions, The Driveshaft Shop, Drag Cartel, and Precision Turbo. “But we made the cars win. We put it on their rules and we still won.” 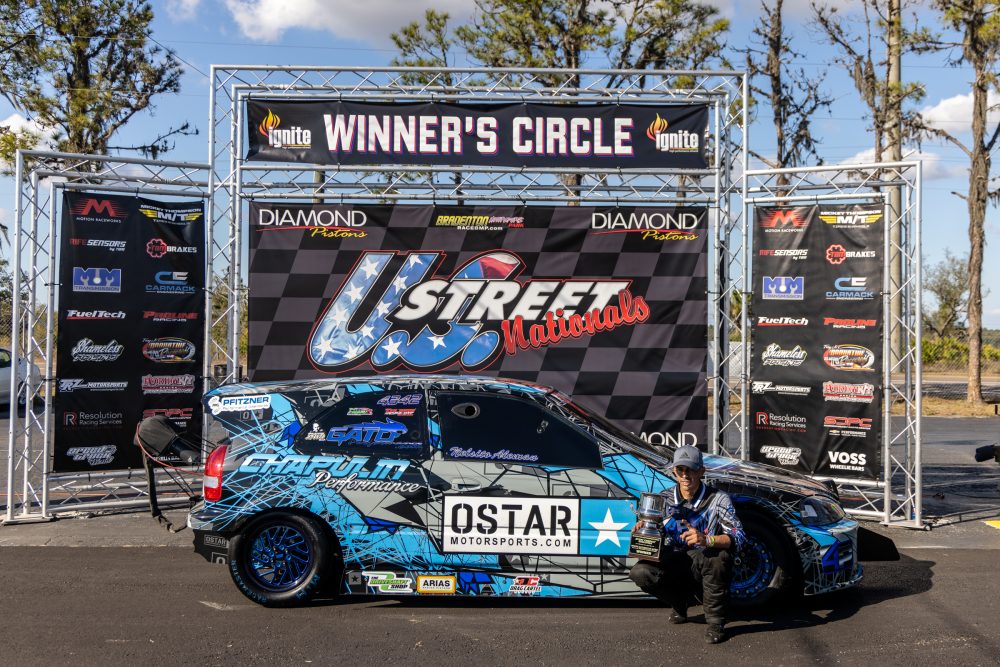 This race was the first event racing under a new rules set for the XFWD class. Track owner and event promoter Victor Alvarez worked with Chris Miller of Chris Miller Racing and tech official John Sears to develop the new rules set, while the tech team led by Vinny Laudicina enforced the new rules, which included new guidelines for things like wheelbase, fuel, and more.

“I think this first event under the new rules went very well,” Alvarez said. “Our goal with the new rules is to make the class more competitive and as fair as possible. We had a good showing of cars, a good variety, different combinations and they were all pretty close together. We found ways that we can improve and make it even better moving forward. We’re going to build up the other classes as well and build up the Sport Compact segment.”

Alvarez went on to congratulate Aleman and the OStar Motorsports/Chapulin Performance team on the win, which included a $15,500 payday.

“They proved themselves,” Alvarez said. “They proved no matter what the rules are, they’re going to work hard and they’re going to compete. They did very well. Those guys are fierce competitors in this class. Nelsito has been doing this forever and Kevin is a great driver and he’s only 17.” 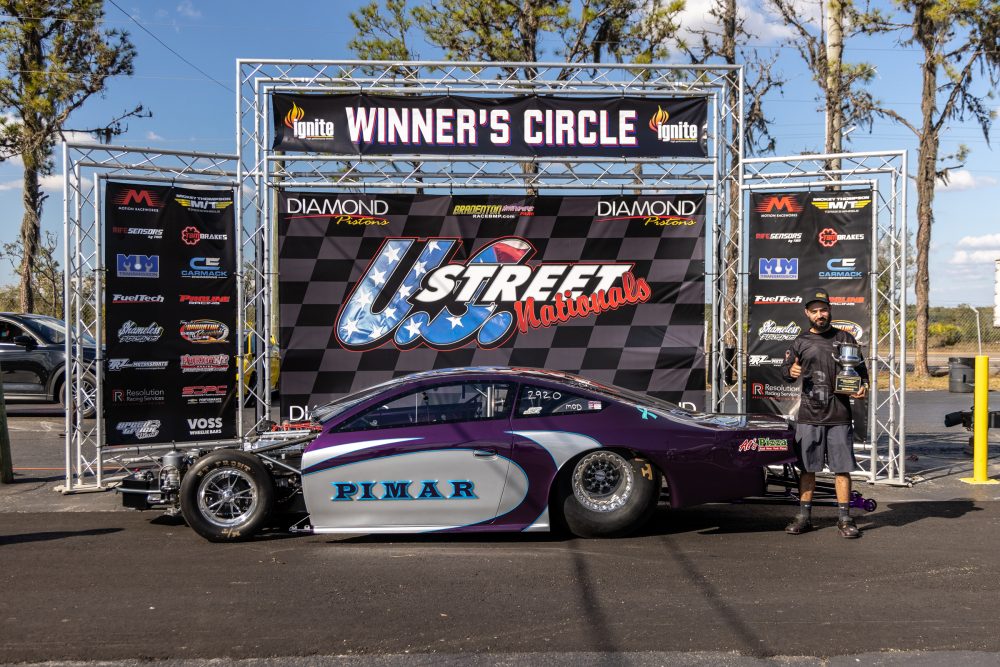 In Modified presented by Induction Performance, No. 1 qualifier Derick Santiago raced to victory in his Pimar Acura, recording a 6.55 at 218.94 in the final round. He ended up going off the end of the track into the sand trap because his parachutes didn’t deploy. Final-round opponent Aileen Morales rolled the beams before the tree activated.

“We worked very hard for this,” said Santiago, a 23-year-old from Haines City, Florida. “The car is relatively new – this is our third outing with it. I have to thank my sponsors and the group of guys I have behind me. Without them, none of this would be possible. We’ve accomplished a lot so far. We had a little accident in the sand trap, but it was minor damages. Just happy we’ve accomplished what we have so far.” 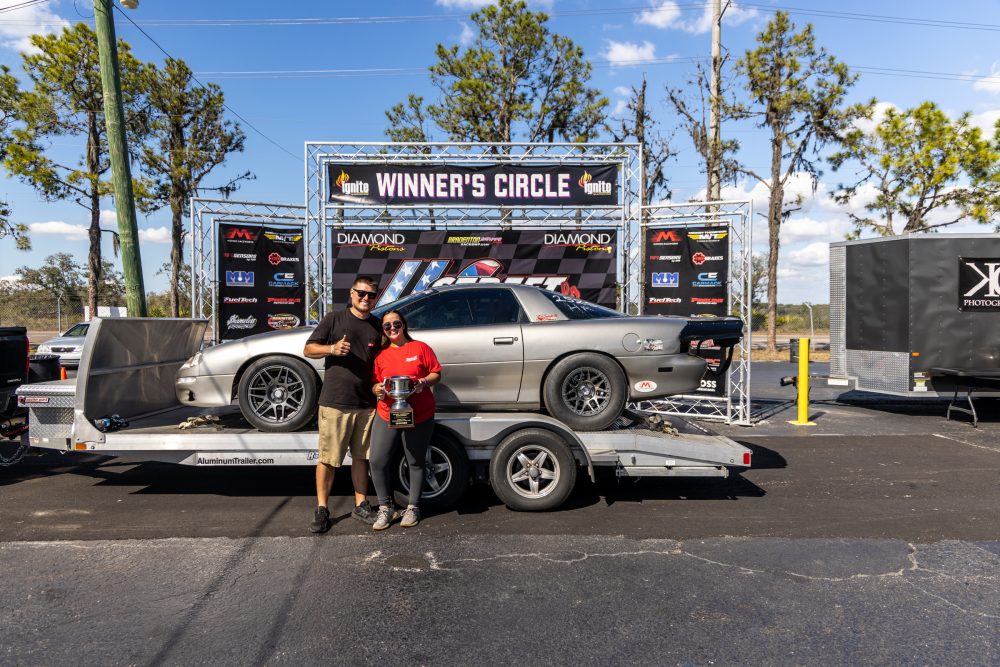 Bradenton’s own Cooper Bogetti scored the win in Hot Rod/Extreme 28s presented by Brian Crower when No. 1 qualifier Johnny Lyons rolled the beams in the final round. Bogetti in his turbocharged, Induction Performance 2JZ-powered ‘99 Camaro lost traction shortly after leaving the starting line and coasted to a 14.75 at 80.97. His 8.077 at 156.05 in the first round was low E.T. of eliminations and the second-quickest of the weekend.

“I went up to that final round and I knew my trans was slipping after my first pass,” said Bogetti, who has a huge following on YouTube and Instagram. “I was going in knowing I wasn’t going to do great if [Lyons] had a good pass. I wanted to take the beams because you never know what the other lane is going to do. Sometimes it’s better to have a little bit of luck than a whole lot of skill.”

Many of the drivers in competition at Sport Compact Evolution will return to Bradenton Motorsports Park later this year for the 10th annual FL2K presented by Brian Crower, Oct. 6-9.