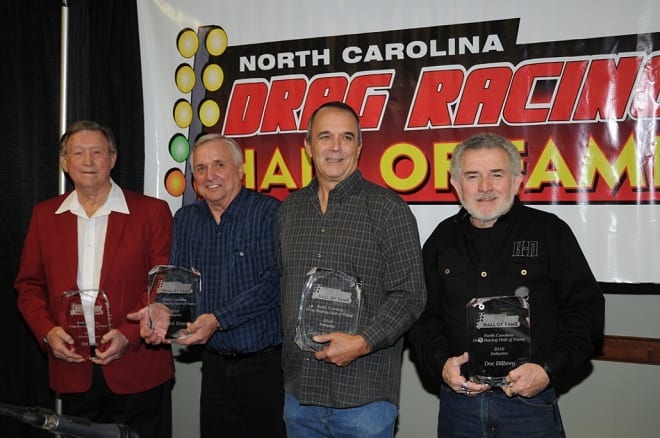 It seems hard to believe that this is the 10th class of inductees that have come into the North Carolina Drag Racing Hall of Fame, but there we were, our small family growing with every passing year. The idea of former Piedmont Dragway owner and promoter of the Shriners’ Hot Rod & Drag Expo, Jim Turner, has now grown into a group that is respected all over the drag racing universe.

Ceremonies began with a welcome from Shriners’ Potentate, Johnny King, reminding the group assembled of the important work being done every day in the hospitals supported by events such as the Hot Rod & Drag Expo. At this time, Steve Earwood, who was inducted into the International Drag Racing Hall of Fame this year, welcomed everyone and started the proceedings with inductee Bob Harris introducing Doc Bilbrey and Gary Bingham. Yours truly had the great honor of introducing Richard Broome. Mark Joyce spoke for Pro Mod pioneer, Ed Hoover, who was away on a business trip and could not attend. Bill Blair introduced Pioneer Award Winner, Bill Ellis, and Richard Broome accepted the Jeff Byrd Memorial Lifetime Achievement Award for Mr. Rick Hendrick. Mr. Hendrick was unable to attend as he was at the Daytona 500. He will accept the award in October during Charlotte’s RaceWeek when Mooresville, NC honors its Walk of Fame inductees.

Each year, the list of names of prospective inductees seems to grow exponentially, and we, the nominating group, have a tougher time narrowing the list to four or five individuals. We all do our best to bring to you, the drag racing fan, the most diverse and unique group possible for each year’s event.

Story and photograph by Greg Burrow