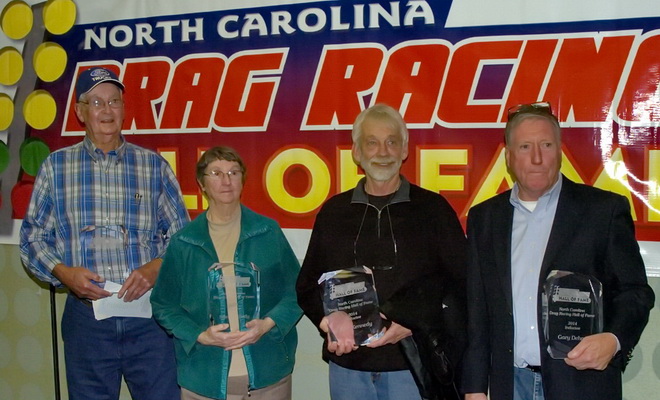 Even with the holiday and a spring rain, the crowds were good for both the Expo and the Hall of Fame induction, traditionally held on the Saturday afternoon of the Expo.  This edition, the eighth so far, was no different as family and friends filed in for the festivities.

After opening remarks regarding the state of drag racing from Rockingham Dragway owner Steve Earwood, Master of Ceremonies Mark Joyce introduced legendary driver and team owner Roy Hill to present the first inductee, the late Sam Kennedy, who was one of the original Chrysler Super/Stock competitors that made the switch to the A/FX-style cars that were so popular in the 1960s. Sam’s wife, Joyce, accepted the honor on his behalf and told a few stories of this young kid named Roy Hill, that would hang around with Sam and became like another son to her. 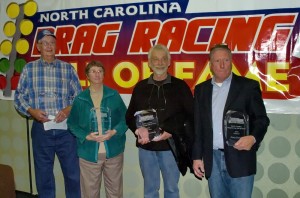 Greg Burrow helped introduce the next two inductees, Mike Kennedy and Gary DeHart, with help from fellow NCDRHOF founding member Bill Blair. Bill told several stories about how Mike and Gary got started, working for him at his shop.

Both thanked Jerry Pierce, of Hot Rod Barn fame, and Cliff Stewart, who along with son Howard, founded the Performance Connection parts source that became a popular resource for racers in the early ‘80s. With success in a joint Pro Stock Camaro, built by Gary and driven and tuned by Mike, the guys also became successful in the area of NASCAR. Gary spent time as fabricator, innovator, and crew chief , winning a Winston Cup with Terry Labonte in 1996 and becoming a major contributor to the success now enjoyed by the Hendrick Motorsports group. Today, Gary is a major supplier of engineered seating for NASCAR while working with the NASCAR Tech Center in the area of driver safety.

Mike Kennedy went on to become a major source of engines for Pontiac, building race-winning powerplants and specializing in superspeedway combinations for teams beginning with Rusty Wallace, Petty Enterprises, Bill Davis, Hendrick Racing, and Richard Jackson. With his reputation as a builder of reliable power for the circle tracks, Mike was able to come back to drag racing, ending up in the Mountain Motor Pro Stock area. In 2004 one of Mike’s powerplants put Mike Bell in the Sonny’s 6.40 club at Rockingham, and more recently he was partnered with Larry Overby and driver Jeff Dobbins in IHRA and ADRL competition.

Blair next introduced Gene Lunsford, who played a major role in establishing Pontiac as a major force in drag racing. Earwood also spoke about and acknowledged the induction of Barry Setzer. Becoming a major force in the textile industry allowed Setzer to become a major innovator in drag racing in the ‘70s with some of the most beautiful and highly engineered race cars of the time.

The Jeff Byrd Memorial Lifetime Achievement Award went to a true southern gentleman, Hank Thomas. Having helped more racers than it is possible to count, both circle track and drag racing, Hank has been in the same location in Winston Salem, NC, for an incredible 54 years.

Closing remarks were given by Don Miller, owner of the permanent home of the North Carolina Auto Racing Hall of Fame, who reminded everyone of the importance of keeping the history of circle track and drag racing alive. The Mooresville, NC-based facitlity is run strictly on donations and needs much help to build an addition to house a permanent portion dedicated strictly the NC Drag Racing Hall of Fame.

Executive Director Jim Turner closed with thanks to all in attendance and urged everyone to look forward to a NCDRHOF fund raiser this fall in Mooresville.