“This will be a great day for all drag racing participants and especially the fans,” Turner said. “Now the visitors to the North Carolina Auto Racing Hall of Fame will be able to enjoy every aspect of both oval track and drag racing history, all housed in one beautiful complex.”

The expansion project will kick off with a special  NCARHOF drag racing month in September, to include a car show and fundraising event. Many current members of the North Carolina Drag Racing Hall of Fame, which was started in 2007, plus several current stars of the sport, also will be on hand to meet fans and pass out special souvenir merchandise. 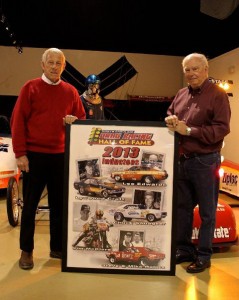 “I am as excited about this project as is Jim Turner,” Miller declared. “We currently have a small area that showcases drag racing history. With this expansion project we will be giving the sport the respect that it deserves.”

Founded in 1994, the  North Carolina Auto Racing Hall of Fame is dedicated to the enhancement of the rich heritage of all forms of motorsports. As a privately funded organization, proceeds from the operation of NCARHOF are donated annually to organizations such as the Stop Child Abuse Now (SCAN) and Stocks for Tots, which provides hundreds of children with new toys each December. NCARHOF’s Miller was the first recipient of the NASCAR Humanitarian Award for his charitable efforts.