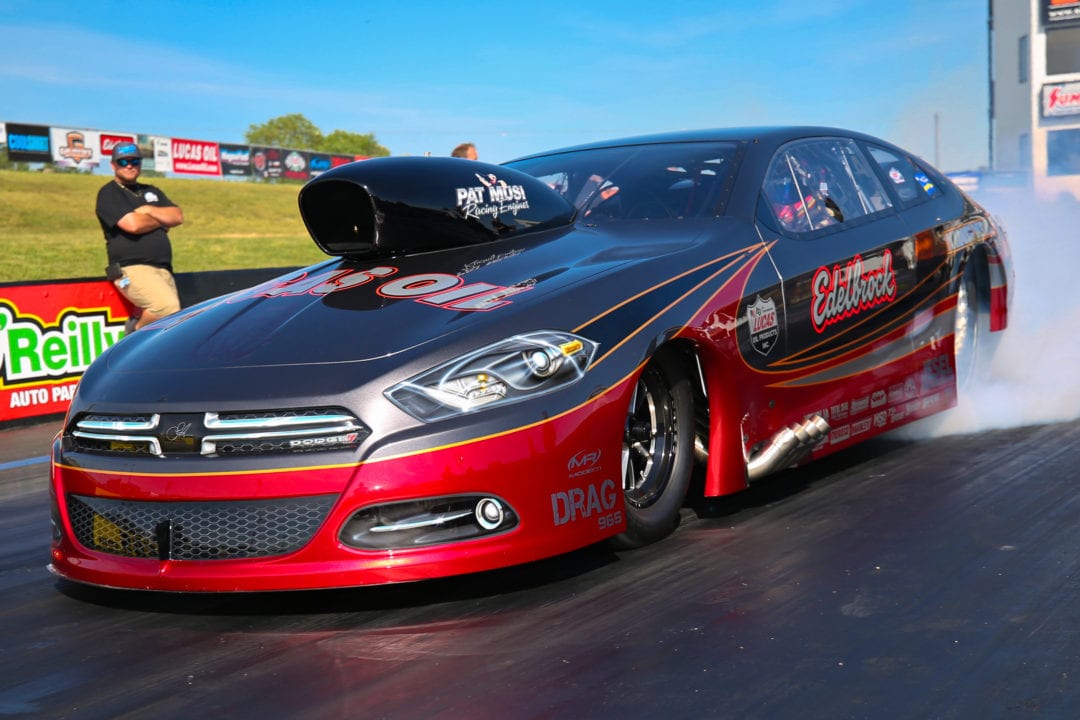 Leading the fields in the Jr. Dragster classes are Joshua Talvacchio in Coolshirt Pro Jr. Dragster presented by Knoxtown Products with a perfect 7.900 pass and Gayge Farrell in Gilbert Motorsports Top Jr. Dragster with a .008 reaction time.

One month after recording multiple passes in the 3.60-second range at the PDRA season opener at GALOT Motorsports Park, Pro Nitrous star Lizzy Musi continued her strong early season performances with a 3.650 at 207.02 in the “King Kong 7” ’18 Dodge Dart owned by Frank Brandao and tuned by her father, engine builder Pat Musi.

“It’s awesome to go out there and finally get the No. 1 spot,” Musi said. “My team definitely deserves it. My dad and the team have been working hard at it and this is a good achievement for this whole team, so we’re excited. We know we have a night run tuneup, so now we need the heat-of-the-day tuneup. Hopefully we can get the car consistent, go rounds and take home the win.” 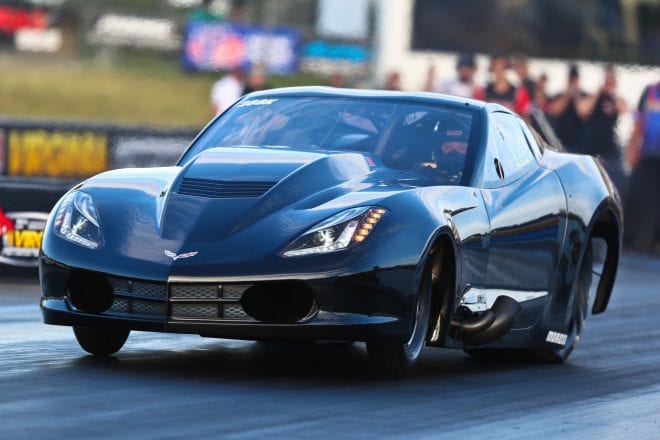 Pro Boost rookie Kris Thorne picked up his first No. 1 qualifier award after he unleashed a 3.688 at 215.37 in his twin-turbocharged ’17 Corvette during the final qualifying session. With Proline Racing tuner Mikey Rees calling the shots, Thorne also led the first two qualifying sessions with a 3.719 and 3.709, respectively.

“We’ve done pretty good here at Virginia,” Thorne said. “We struggled a little bit in testing trying to get the car to run quicker in the front. We’re running out the back door good, we’re just struggling in the front area. We’re just starting to get it to come around now. But I’m feeling pretty confident. The car’s been on a string. We haven’t aborted a run since we’ve been here. We’re just running really well.”

Thorne will face Bubba Turner in his supercharged ’68 Camaro in the opening round of eliminations Saturday afternoon. GALOT Motorsports teammates Kevin Rivenbark and John Strickland followed Thorne in the No. 2 and 3 spots, with Rivenbark posting a 3.716 at 199.37 and Strickland running 3.717 at 201.82 in the team’s ProCharger-boosted Camaros. 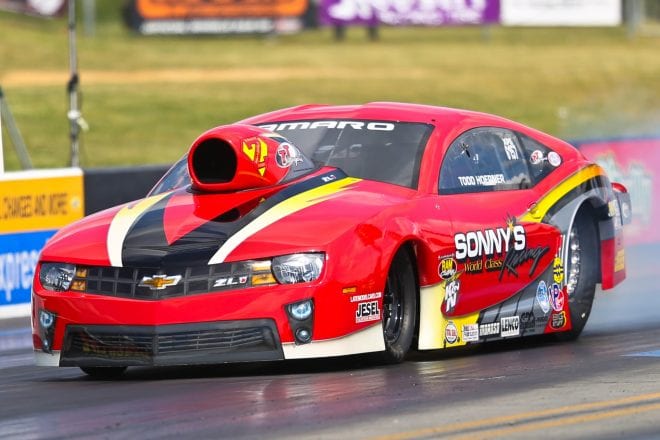 Todd Hoerner rolled into Virginia coming off runner-up finishes at the PDRA East Coast Nationals and the NHRA 4-Wide Nationals Mountain Motor Pro Stock exhibition race. The Virginia native added another accomplishment to that list when he held off a strong Extreme Pro Stock field to grab the No. 1 spot with a 4.075 at 177.95 in the Zarella family’s Sonny’s-powered ’12 Camaro.

“We were fortunate enough to get runner-up at GALOT, runner-up at the 4-Wides at Charlotte and now we’re No. 1 qualifier, so that’s pretty cool,” Hoerner said. “It’s a credit to the crew and TT Motorsports with Tommy Zarella and his wife Paula to let us be able to do this. We’re very thankful for that. (Crew chief) ‘Lump’ (Brian Self) is doing a great job making the calls on the car. We’re just taking baby steps and we keep improving round after round. Tomorrow’s another day, but for tonight we’re super excited.”

Hoerner will take on veteran Pro Stock driver and tuner Tommy Lee in the first round of eliminations. Lee is driving the ’19 Camaro usually driven by class veteran John Montecalvo. Chris Powers, who won the recent NHRA 4-Wide Nationals in Mountain Motor Pro Stock, qualified No. 2 with a 4.075 at 177.39 in his Sonny’s-powered Liberty’s Gears ’14 Camaro. Past world champion and season opener winner John Pluchino recorded a 4.076 at 176.30 in his Kaase-powered ’13 Mustang to qualify third. 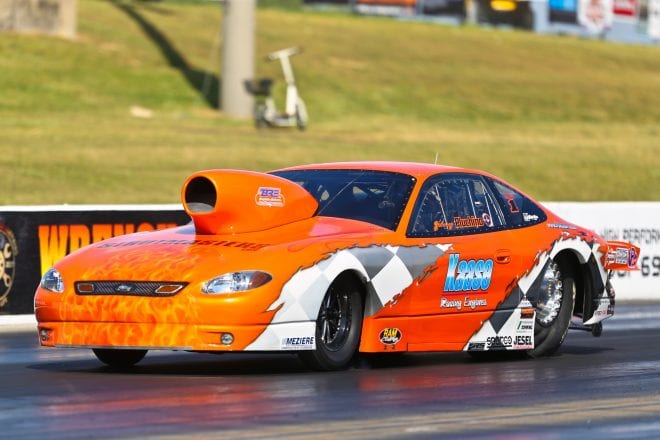 Defending Pro Outlaw 632 world champion Johnny Pluchino won the season-opening East Coast Nationals in early April, but he still wasn’t completely satisfied with the performance of the Kaase-powered ’06 Ford Escort he drives for car owner Dominic Addeo. Pluchino’s 4.220 at 168.37 was closer to what the second-generation driver was looking for from the Strutmaster.com-backed entry.

“We changed some stuff over the winter and I just didn’t have a good handle on getting the car to run early at the last race,” Pluchino said. “I had a brainstorm while I was home one night just sitting on the couch thinking, and fortunately we came out here in testing and made all those changes, let the clutch go and picked up two hundredths to the 60-foot in some hot conditions. We were real happy with that and we came out here and had a bracket car in qualifying. I feel like we have a really good car going into race day.”

Pluchino will have lane choice over No. 14 qualifier Vinny LaRosa in his Voss-powered ’71 Duster in the first round of eliminations. Past world champion Dillon Voss posted a 4.242 at 169.68 in his Voss Racing Engines ’17 Corvette to qualify No. 2, followed closely by East Coast Nationals runner-up Wes Distefano in his Musi-powered ’68 Camaro with a 4.247 at 172.34. 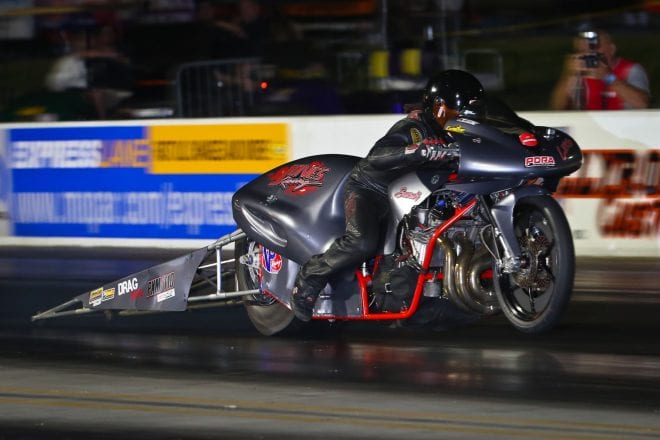 The PDRA’s lone two-wheeled category made its season debut Friday night as Pro Nitrous Motorcycle joined the series for their first of six races on the eight-race PDRA tour. Chris Garner-Jones capitalized on a productive Thursday test session by racing his way to the No. 1 spot with a pair of 4.03s and a 3.984 at 177.37 aboard his Jones Racing ’17 Hayabusa.

“The first pass was good and our last pass was pretty awesome, so I can’t complain,” Garner-Jones said. “I’m very, very happy with how we ran today. It’s a promising start. I feel like we can pull off a championship this year. I feel like this is the year. I really do.”

Garner-Jones will face Terry Wynn and his Jacksonville, Florida-based ’13 Hayabusa in the opening round. Past world champion Travis Davis rode his Davis Racing entry to a 3.997 at 177.07 to qualify No. 2. Defending world champion Ronnie “Pro Mod” Smith qualified third with a 4.048 at 171.99 on his Innovative Performance ’16 Hayabusa. 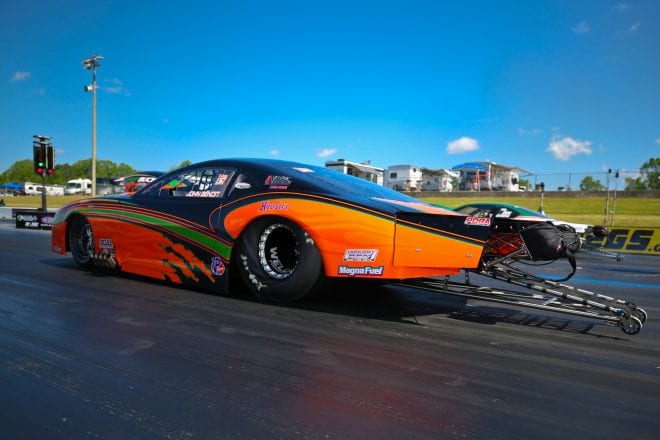 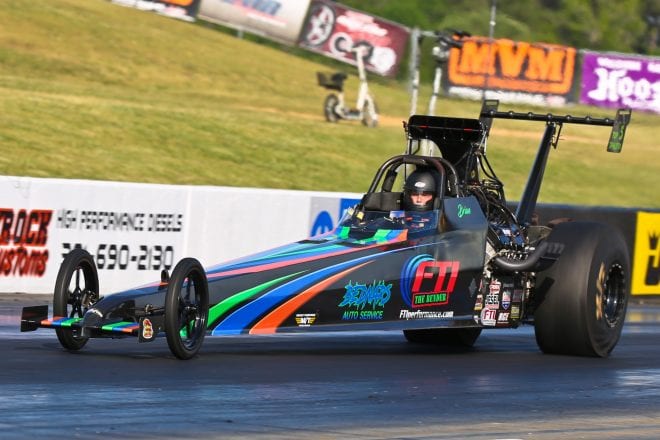 Ocala, Florida’s Brian Bednar raced to the top of the Elite Top Dragster qualifying order with a 3.794 at 192.06 in his supercharged FTI-backed Spitzer dragster. Robert Pickens in his supercharged “Kidzilla 5” Pickens dragster is No. 2 with a 3.810 at 189.87, followed by John Creasman’s ProCharger-equipped Maddox dragster and its 3.825 at 192.11.

The PDRA Mid-Atlantic Showdown presented by Modern Racing continues Saturday at 10 a.m. Pre-race ceremonies are scheduled for 3:50 p.m., with professional eliminations to begin at 4 p.m.