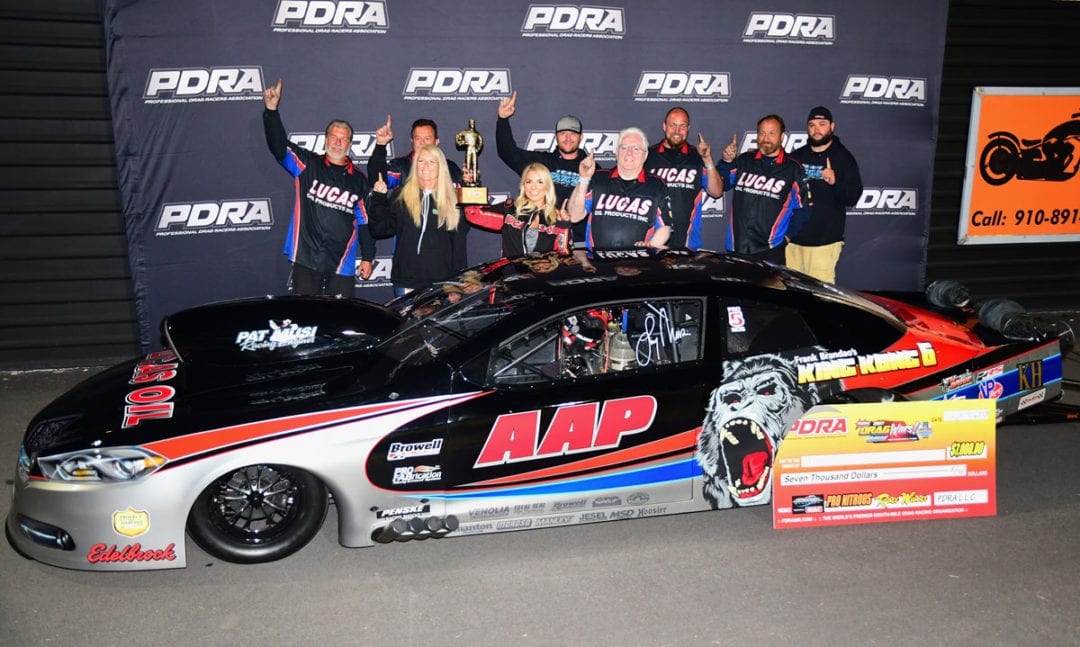 Pat Musi Racing Engines continues to set the pace across multiple doorslammer organizations in 2017, and that was especially on display during the last two weekends of racing in both the Professional Drag Racers Association (PDRA) and NHRA J&A Service Pro Mod series.

In PDRA competition on September 8-9 at GALOT Motorsports Park in Benson, North Carolina, Musi-powered cars stole the show in Pro Nitrous. Defending series champion and Musi stalwart Tommy Franklin qualified on the pole at the PDRA Drag Wars with a 3.665 elapsed time at 205.66 MPH in his ’69 Camaro, followed closely by Pat Musi Racing Engines president Lizzy Musi at 3.677 and 204.88 MPH.

The two cars couldn’t be stopped throughout eliminations and met in an epic final round showdown, where Lizzy concluded an incredible driving performance with a .011 reaction time to get the jump on Franklin and lead him all the way to the finish line stripe. When the scoreboards lit up they showed that Musi’s 2015 Dodge Dart had blasted the Pro Nitrous 1/8-mile world record with a 3.656 ET, and her 206.42 MPH trap speed was enough to back up the 206.54 MPH she ran in the semifinals to also set a new world speed record.

“Running against Tommy, we knew we were going to throw everything we had at it because Tommy would be doing the same thing,” Lizzy said. “Everything just came together and I was able to drive with so much confidence in the car’s performance and cut some great lights.”

With Franklin’s performance in qualifying, Pat Musi secured his fourth consecutive Nitrous Wars championship. The award is presented by Flatout Gaskets to the engine builder with the most top qualifiers in Pro Nitrous each season, and Musi is the only recipient of the honor since its inception.

“I really take a lot of pride in the Nitrous Wars deal,” Musi said from his shop in Mooresville, NC. “For me, it’s really an honor and I attribute it to my entire team, and each and every customer we have running our engines in Pro Nitrous.”

With just one race remaining in the PDRA season, Franklin is leading the championship points standings, while Lizzy Musi sits in third. Musi engine customers Randy Weatherford and Jason Harris round out the top five. 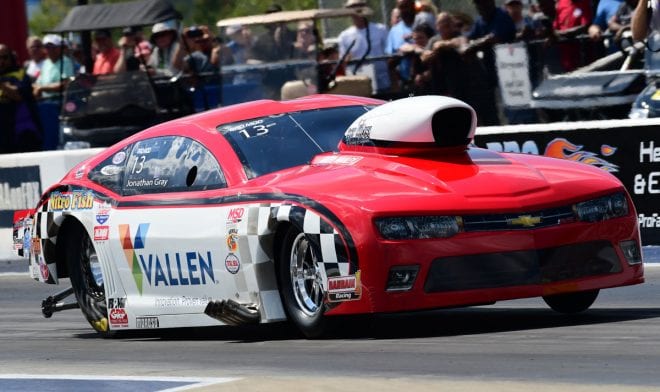 Pat Musi’s focus then shifted to the NHRA J&A Service Pro Mod Series, which was competing in the tenth event of a 12-race schedule at the NHRA Carolina Nationals at zMAX Dragway near Charlotte, NC, on September 15-17. With the race only a few miles from Musi’s facility, he was able to attend and assist his customers, a list which includes defending series champion Rickie Smith and his stable of Camaros driven by Khalid Al-Balooshi, Jonathan Gray, and Smith himself.

“I couldn’t be happier for Jonathan, Rickie, and their entire team,” Pat Musi said. “They’ve worked hard and have done a great job this year. This whole thing is about working hard. We never stop working to get better. From NHRA to PDRA to grudge and no-prep racers like Kye Kelley, sportsman racers, you name it, our goal for this year was to have all of our customers running at the top of their class, and I think we’ve achieved that.

“We’re not resting. There’s more to come,” Musi continued. “We’ll be working on some things over the offseason that will keep our customers out front in 2018. I like to say there’s a ‘bad moon rising’ for the competition.”