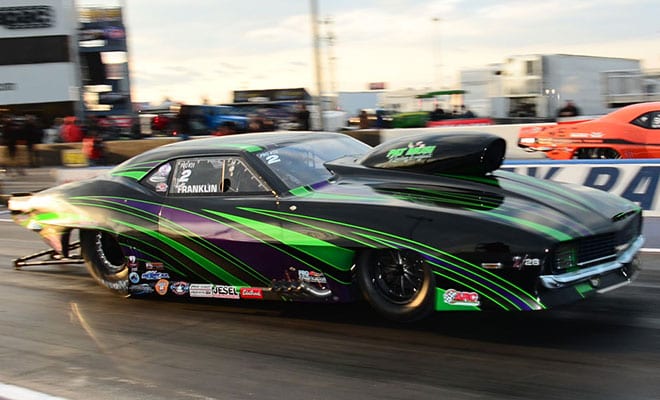 Pat Musi Racing Engines is at it again. When the PDRA season kicked off at Tulsa Raceway Park just a week ago, Musi power continued its dominant ways as Tommy Franklin qualified number one with the quickest pass in class history, a 3.686-second blast at over 203 MPH. Just last October at the PDRA World Finals Lizzy Musi took over the Pro Nitrous speed record at 204.01 MPH and went on to win the event.

Although the Tulsa event was postponed due to weather before Franklin could back up his run to officially reset the record, he’ll have the opportunity to seal the deal when the event is finished at the PDRA Spring Nationals at Rockingham Dragway, April 7-9.

“We had a lot of dyno time over the winter, trying different combinations,” told Franklin, who has used Musi power for over three years. “Pat has really had his head into his program. We found some power over the winter. You never know if it’s going to show up on the race track, but it did. We went to Bradenton earlier in the year to test and it was strong down there. When we came to Tulsa with favorable weather conditions we were able to put up the quickest pass in history so far. What was really nice about that was we never worked on the motor all weekend. It rolled in the trailer all in one piece and never had the heads off of it all weekend. It was a really durable, strong piece.”

In preseason testing, Franklin went as fast as 204.40 MPH and he believes that there’s still more ET left in his Musi engine. “I think we can back up the record. We need to go 3.722 to back it up. Last year at the fall race [at Rockingham] we went a .71. If we can get low 70s for the temperature and have the track not be too hot I definitely think we can back it up. Jerry Bickel built us a really good car that has done us well. Pat Musi has great power. We have a lot of good parts and I have a really good crew that keeps things consistent. We thank God for our performance.”

“I couldn’t be happier,” Musi said of his client’s early season success. “I’m not a copier. I’m an innovator. I’ve been an innovator since 1971 when I started. I just work on it, beat on it, ’til I get it. We’ve got a lot of good people. First of all, I’ve got support from good guys running my stuff. Second of all, I’ve got guys like Richard Maskin, Danny Jesel, Graham at EFI that I go back years with. You build relationships. You work together. You work hard. Things start coming together. It’s good to see it come together. One of my highlights was Lizzy winning Virginia and setting the speed record. To see your daughter do that is pretty awesome. That was a good deal.”

Another Musi customer and reigning Pro Nitrous World Champion, Rickie Smith, has been making waves on the quarter-mile end of Pro Modified, recording an incredible 5.760 elapsed time at 251.25 MPH and then going on to win the NHRA Gatornationals the same weekend Franklin sat on the pole in Tulsa.

During a time when Pro Mod, and specifically Pro Nitrous, competition is at an all-time high, Musi’s innovations continue to provide class-leading results, setting the bar and resetting records.