As has been the case for several seasons, Lizzy continued to run the fastest speeds in Pro Nitrous throughout the season, continually resetting her own record. She ended the 2017 season on a high note, winning the World Finals in Virginia while recording three of the fastest passes in Pro Nitrous history and tying her own national record with a 206.54 MPH run. Franklin was the low qualifier with a record-setting 3.653 pass. Musi Racing Engines now holds both the elapsed time and speed records in Pro Nitrous.

Lizzy also won the prestigious PDRA Drag Wars at GALOT Motorsports Park and was runner-up at the season opener in Valdosta, GA. Franklin had three additional runner-ups and a win, equating to him being in six of the seven final rounds this year and a Musi customer being in every 2017 final round. 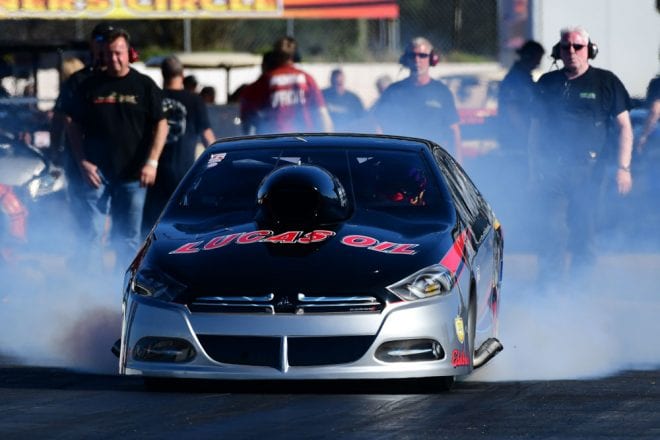 “We’re taking this win as momentum for next year,” Lizzy said of the World Finals victory. “We’re planning on getting a new car. That’s going to be pretty cool as we get it all figured out. We’re looking forward to that.

“It’s not just us running fast,” she continued. “All of our other customers are running with the best, too. Look at John Camp. He ran 205 MPH. Tommy Franklin is running big speed as well. John Hall ran well this past weekend. Jim Sackuvich ran well. We’re proud to have all these guys on our team. They all work hard. We’ve got the powerplant to give them and it’s definitely making the field more competitive.”

Franklin and his team carved out a special piece of history for themselves as his eldest daughter, Amber, took home the 2017 Pro Junior Dragster world championship this season as well. The father/daughter duo is one of the first, if not the first, to win championships in the same season. And in just her first year in Top Junior Dragster, the youngest Franklin, Ashley, finished fourth in national points standings.

“We had a truly incredible season,” added Franklin. “Our Musi power stayed strong for us through every weather and track condition and my team worked hard to make this year a success while running three cars. Sharing this championship alongside Amber and having Ashley finish fourth in her rookie year means the world to us. We are extremely grateful for Musi Racing Engines’ part in making that happen.”