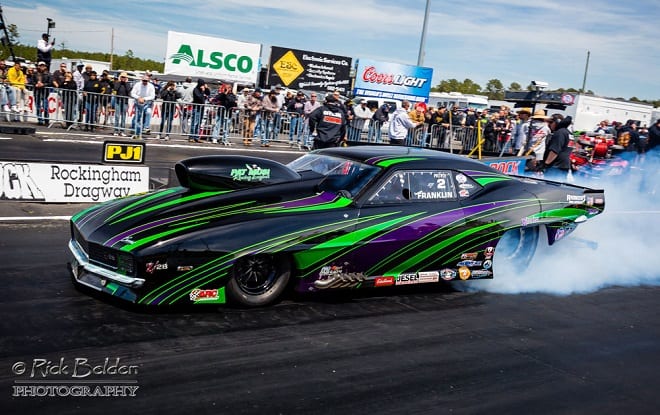 While Musi engines may be best known for their feats in Pro Nitrous (Lizzy Musi holds the current speed record and Tommy Franklin recorded the quickest-ever pass), the family business is taking customers to the winner’s circle across the board.

At the recent PDRA Spring Nationals it was a Musi engine, wielded by 2014 class champion Dan Ferguson, that showed up in the winner’s circle in Top Sportsman. In Top Dragster, Musi engines currently sit number one and number two in points with customers David Brown and Jimmy Sackuvich, respectively. It’s clear that Musi engines aren’t just fast, they’re consistent. Other than the run in which Ferguson coasted to the win because of his competitor’s red-light start, Ferguson’s car varied six thousandths of a second throughout race day. That kind of consistency when running at speeds over 180 MPH and covering the eighth-mile in just 3.98 seconds is an extraordinary feat for an engine.

“The Pat Musi Racing Engines 903 is a phenomenal engine,” Ferguson expressed. “We have 40 passes on it since the car was put together in October 2015. The headers have never been off it and the cylinders are still leaking under ten percent. The drivability of the electronic fuel injection (EFI) is amazing; it just plain runs good. It runs like a street car. We ran 3.98 after 3.98 through eliminations on the way to our win in Rockingham, and I believe the EFI plays a big part in that kind of consistency.”

“We’re very pleased with our new ProCharger deal, and especially with Dan getting the win with his brand new combination,” stated Pat Musi Racing Engines owner and mastermind Pat Musi. “We’re tickled to death over that deal. We’re one-two in PDRA Top Dragster points. We took a stab at it and we’re really pleased.”

At the same event Musi engines were number one and number two in Pro Nitrous qualifying. PN newcomer and X275 standout, Dean Marinis, debuted a new 903 Musi engine and in just his second pass with the new combination he posted a 3.762 elapsed time. In the final round of qualifying he recorded his personal best ET, a 3.730, to top the field.

Pro Nitrous standout Tommy Franklin used his Musi engine to take the spot behind Marinis with a 3.742. Franklin was pulling double duty in qualifying as he was also finishing business from the postponed season opener. The semi and final rounds were unable to be completed as scheduled in Tulsa and were run during qualifying at Rockingham. Franklin took out Jay Cox and Travis Harvey to be the first PN victor of the season.

“Tommy’s got the quickest thing on the planet at 3.68,” stated Musi, referring to the quickest recorded pass in Pro Nitrous history. “Lizzy’s got the 204 [MPH]. The records speak for themselves. The thing that’s really exciting for us is that we’re not working on our engines between rounds. That’s a major accomplishment in our kind of racing. We’re getting a lot of calls for that reason.

“Dean Marinis, first time out, number one qualifier with a brand new motor. People are calling, asking, ‘Will I get the same thing? Will I get the service?’ Everybody gets the same thing. That’s what we do. We work hard. We’ve got something to offer the guy that wants to get in and do it right the first time. And now we’re proving it in the bracket world, too.”

Musi engines are also proving themselves in NMCA, where Tim Savell, driver for the Bankston Boyz, won the recent NMCA/NMRA All Star Nationals at Atlanta Dragway. The team also set low ET and top speed of the event with a 3.76 at 197 MPH.