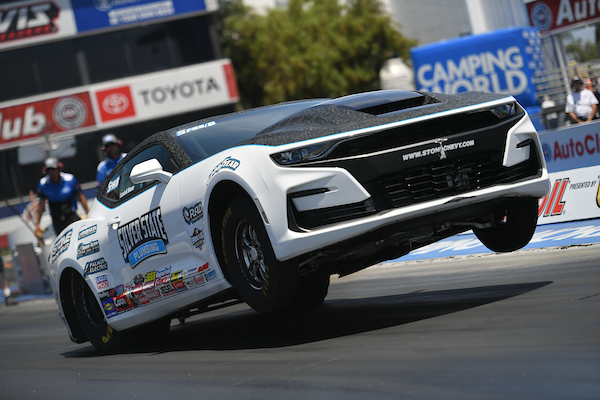 Lamb, whose first national event victory was in Top Comp at the SPORTSnationals in Fontana in 2006, has claimed 27 wins across a total of six categories. He’s raced two cars for most of his career, and most commonly, he has been devoted to Super Stock and Stock Eliminator.

The one item he has yet to cross off his wishlist, though, is victory at the U.S. Nationals, NHRA’s most historic and lauded event. Lamb will get his shot in just a few days at Lucas Oil Raceway at Indianapolis, where the Dodge // SRT NHRA U.S. Nationals will take place, September 1-5.

“In Sportsman drag racing, winning Indy is the one thing I’ve really wanted but haven’t been able to get done,” said Lamb. “I’ve never even been close. There is still a lot that I haven’t accomplished in my racing career, but winning this race is very high on the checklist.”

Lamb will be armed with a pair of fierce Chevrolet COPO Camaro entries; the RAD Torque Systems-branded 2020 FS/D car that he runs in Stock Eliminator and the Silver State Plumbing 2020 FSS/B Super Stock entry owned by Larry and Carol Stone of Stone Chevrolet in Tulare, California.

The notable engine builders at Stanfield Racing Engines supply the power for the Super Stock COPO, and fellow Sportsman champion Aaron Stanfield has been instrumental in Lamb’s progress with a new car that has a whole different personality than any other he’s driven.

Lamb launched into the season in March at the Las Vegas LODRS event, and although he socked away a victory for RAD Torque Systems in his Stocker, he was hoping for much more than two round wins in the Super Stock car. He just kept chipping away through the spring and well into summer, though, and finally got to a more comfortable position at the Topeka national event in early August.

A final-round finish next to event titlist Wyatt Wagner fanned the flames for Lamb, who is ready to get back to the winner’s circle in a category in which he has previously seen so much success.

“This new Super Stock car has been a huge learning curve for me,” admitted Lamb humbly. “I know that the end result will be that this is a really good racecar, but it’s taken time to figure it out. That’s been my main priority this season, and after that Topeka final round, I feel like we’re definitely on the right track.”

Lamb, who was also a finalist in Stock at the national event in Sonoma this season, has earned at least one national event trophy at eight different racetracks on the NHRA tour. He’s eager to add Lucas Oil Raceway at Indianapolis to the list, and he will be pleased if it should happen in either category.

“In any season, you want to win races,” said Lamb. “I haven’t done that lately, and I would love nothing more than to win a national event or two before the end of the year. To get it done at Indy would be a dream come true.”