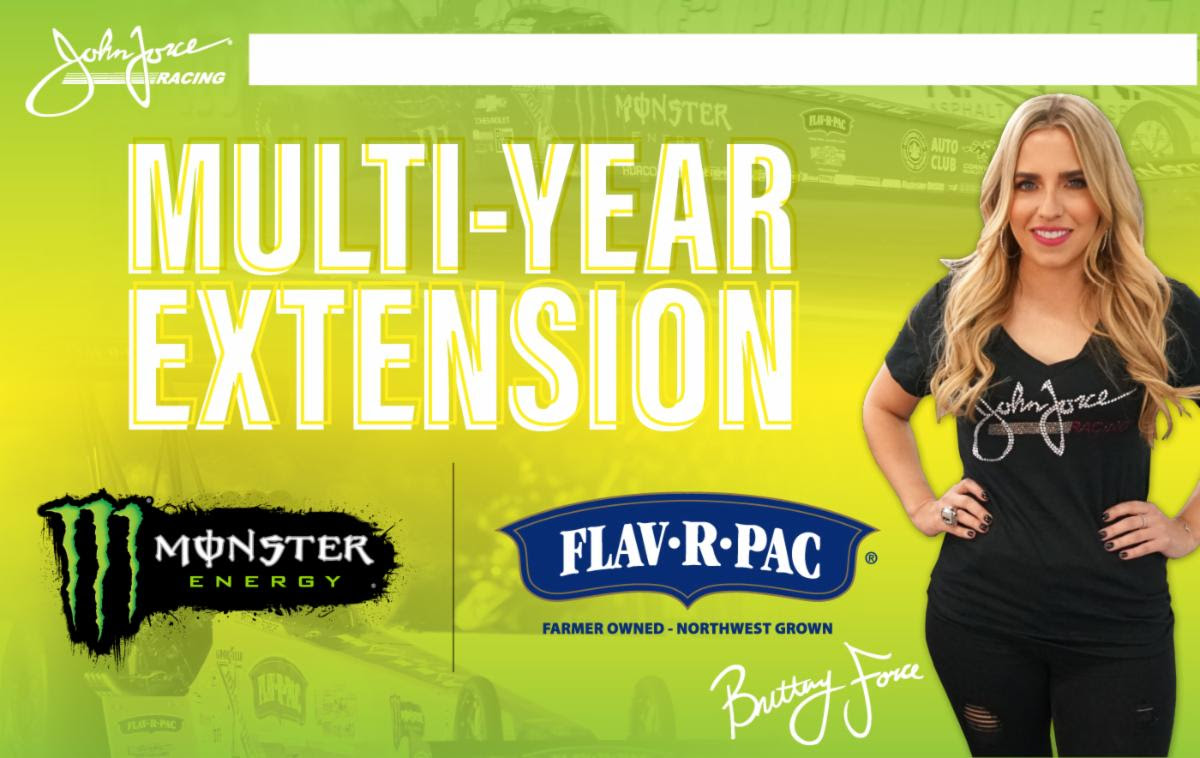 It was announced today that Monster Energy and Flav-R-Pac Frozen Fruits and Vegetables will continue to share primary sponsorship of Brittany Force’s Top Fuel dragster. Monster Energy was originally with the John Force Racing family from 2015-2018 during which Brittany Force won the 2017 NHRA Top Fuel World Championship and returned in 2020 to split primary sponsorship duties with Flav-R-Pac Fruits and Vegetables, a recognized brand of PNW VEG CO., LLC DBA NORPAC, a subsidiary of Oregon Potato Company (OPC) which is owned by Frank Tiegs.

After a successful 2021 NHRA Camping World Drag Racing Series season that featured 12 No. 1 qualifying positions, five final round appearances, a win at Topeka, Kansas and ultimately a runner-up finish in the NHRA Camping World Drag Racing Series Top Fuel championship, Monster Energy and Flav-R-Pac will continue with the Top Fuel stand-out in a multi-year partnership.

“Monster Energy and Flav-R-Pac have been great partners to John Force Racing. They navigated through the pandemic and 2020 with us and came out with a successful season in 2021 with Brittany. Being able to have not just one but two major partners who see the value in this sport and in this team enough to sign a multi-year deal really says something,” said John Force, founder and CEO of John Force Racing. “We are excited to grow the partnership we have with these two impressive brands.”

“A nitromethane-burning car putting out 10,000 horsepower, going over 330 mph in less than 3.5 seconds, and trying as hard as possible to destroy itself? Sounds like Monster Energy,” said Mitch Covington, VP of Sports Marketing for Monster Energy. “A company that prides itself on Unleashing the Beast, Monster Energy is straight-up stoked to go Top Fuel racing with Brittany Force in the 2022 NHRA racing season and beyond. We believe in our Championship driver and we will always continue to support her and the team. Easily the most violent, overwhelming and straight-up powerful form of racing on Planet Earth, you haven’t lived until you’ve felt your chest cavity shake and your eyes and nose burn after a 3-second Top Fuel pass.”

“When we first signed on with John Force Racing as a primary on Brittany’s dragster, we were always looking to the future and how we could grow this relationship. Partnering with this team has been a great decision and we are excited for what the future holds,” said Frank Tiegs, owner of Flav-R-Pac Frozen Fruits and Vegetables. “Heading into 2022 after such a successful 2021 season is really promising. This team is truly dynamic in how they operate making them a perfect fit for Flav-R-Pac and how we want to grow the brand.”