Over 400 racers showed up today and were greeted with outstanding Chamber of Commerce weather on the first day of the K&N Spring Fling Vegas event. Today called for a free Test & Tune session for all competitors sponsored by Yukon Gear & Axle. 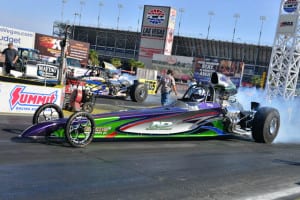 ddThe day also called for the Maytag Silver State Refrigeration $50K To Win Shootout. And when you’re in Vegas, there’s no reason not to gamble. Open to only 32 racers, each ponied up $2,000 to compete for a $50,000 payday. With four cars left, the two semifinal round losers were set to receive $1,000 with the runner-up earning $5,000.

At the round of four, Hankins and Hicks battled it out with a double break-out win going to Hankins. In the other half, DiMino and Wurtz both had double-zero reaction times with DiMino running dead on his dial-in and a five-thousandths package for the win.

The two remaining racers represented opposite sides of the country. With both racers dialed close to one another, DiMino received a .003 head start and never looked back, running a 4.722 on a 4.72 dial-in while Hankins ran a 4.709 on a 4.69 dial. And so “What Happens In Vegas,” isn’t going to stay here today as DiMino will be taking his $50K back to New York.

Stay tuned to Bangshift.com for the live Internet video feed of the event. And visitwww.BracketRaces.com for further info and results from the last two years.