Every driver and crew person knows that the Chevrolet Performance U.S. Nationals is the biggest and richest NHRA event of the year. It is an honor to hit the throttle or turn a wrench during that race. Steve Easton has felt the thrill of participating in the U.S. Nationals before and the Australian Pro Mod racer who has been competing across Ohio this summer was looking forward to a return engagement as a fill-in crew person on a Top Fuel team but at the last minute the team’s needs changed. Easton decided to race the Outlaw 660 event at Dragway 42 instead. It was a fortuitous turn of events as the team picked up their first win of 2018 in the eight car qualified Pro Mod field on Saturday night. 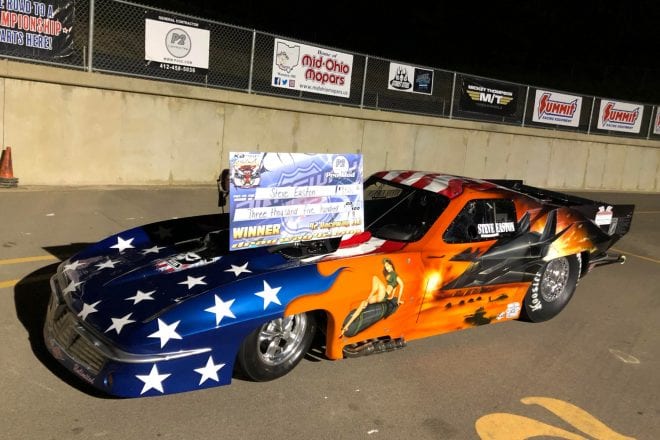 “It was a great day and our guys worked their asses off. We have been working all summer to get to this point,” said an excited Easton a day after the event. “We have struggled and worked so hard. We probably put as much work into this Patriot Pro Mod over the last three races than most guys do in two seasons just to try and getting everything just right. It was really good to be able to share this with the whole Patriot Pro Mod team. It was great to see the look on everyone’s faces especially (team owner) Cor (Valentyn) since this was his first win with this car. All the crew guys put so much blood sweat and tears into this car it was amazing to see all the win lights on Saturday. I am happy to be a part of it and give them everything I have. I have to thank Motorsports Unlimited and Brown & Miller Racing Solutions have helped us so much and of course Simpson Racing keeps me safe in the race car all the time.”

The team has competed at Summit Racing Equipment Motorsports Park in a number of events including the famed Night Under Fire as well as Outlaw 660 events at Dragway 42 in July and August. For the most part those events were chances for Easton to revamp the tune-up and get some seat time to further evaluate his new Hemi motor. Saturday night’s event over Labor Day weekend was a perfect storm of determination, perseverance and great timing by the driver.

“We qualified No. 5 which meant we had to run the No. 1 qualifier. It was an unusual bracket but we took out the No. 1 qualifier in the first round on a hole shot with a .009 reaction time,” Easton said. “We kept working on the tune up and making some small changes throughout the day. We just didn’t want to go out and overpower the race track. We caught a break in the semifinals when the other car broke and we had a single. We took our chance and ran it out the back door to see if we were headed in the right direction on the tune up.”

With nothing to lose in the final Easton again relied on his eyes and feet to get the job done for the Patriot Pro Mod team.

“We were going for lane choice (in the semis) but we came up a little short. Our opponent in the finals had run a 3.99 in the semis and we ran a 4.02. On the last run I tried to smash the tree as hard as I could. We went out and won on another hole shot with a .062 margin of victory with our 4.02 beating his 4.01,” summed up Easton.

Steve Easton will also be racing later this season at the following events: