Clay Millican raced to the qualifying lead in Top Fuel on Saturday at the Chevrolet Performance U.S. Nationals at Lucas Oil Raceway at Indianapolis. Matt Hagan (Funny Car), Vincent Nobile (Pro Stock) and Jerry Savoie (Pro Stock Motorcycle) also were qualifying leaders in their respective categories at the 18th event of 24 on the 2016 NHRA Mello Yello Drag Racing Series schedule. The Chevrolet Performance U.S. Nationals is the final race of the regular season.

Millican set the Lucas Oil Raceway elapsed time track record with a 3.692 at 316.82 in his Great Clips / Parts Plus dragster to take the Top Fuel qualifying lead in the Chevrolet Performance U.S. Nationals. Millican has three No. 1 qualifiers in his career and is searching for his first career win.

“The crazy thing is – it’s one of those could’ve, should’ve, would’ve – the car actually quit before the finish line,” Millican said. “It hurt a piston. It probably could’ve went even quicker, but forget all of that. It’s the first 3.6-second run at the U.S. Nationals and that’s something that can’t be taken away from us. A No. 1 qualifier certainly could be tomorrow. There’s two runs left and I’m hoping we stay No. 1.”

Steve Torrence, a two-time 2016 event winner, is second in his Capco Contractors dragster with a 3.702 at 328.06. Brittany Force is third with a 3.706 at 326.00 in her Monster Energy dragster. Schumacher and reigning world champ Antron Brown are fourth and fifth, respectively.

Hagan used his Friday night performance of 3.858 at 330.80 in his Mopar / Rocky Boots Dodge Charger R/T to retain his qualifying lead in Funny Car. The two-time world champion set the Lucas Oil Raceway elapsed time track record with the pass. Hagan has 24 top qualifiers in his career and has sprinted to three this season, including one two weeks ago in Brainerd, Minn. He is a three-time No. 1 qualifier at Indianapolis but has never won the event. 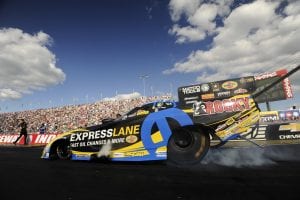 “It’s pretty amazing that we stayed No. 1,” said Hagan. “I really thought that the track was good out there and we were running a little bit later so to stay No. 1 is surprising but obviously we made a great run last night and we were able to stand on that, so that’s pretty impressive. We have a lot of great racecars out there but we have a fast racecar ourselves. I’m looking forward to tomorrow and the Traxxas Shootout. We have a lot of big rounds ahead of us.”

Jack Beckman, the 2012 Funny Car world champion, is second in his Infinite Hero Foundation Dodge Charger R/T with a 3.859 at a track record speed of 333.08. Points leader Ron Capps is third with a 3.861 at 325.30 in his NAPA Auto Parts Dodge Charger R/T. In fourth is Courtney Force and fifth is Tommy Johnson Jr.

The Funny Car portion of the NHRA Traxxas Nitro Shootout, which boasts a $100,000 purse, will take place on Sunday at Lucas Oil Raceway. Capps will race John Force; Courtney is paired with Alexis DeJoria; Hagan will battle Tim Wilkerson; and Robert Hight will go up against Johnson Jr.

In Pro Stock, Nobile held on to his qualifying lead with the 6.582 at 209.79 he posted Friday night at the controls of his Mountain View Tire Chevy Camaro. Nobile has six No. 1 qualifiers in his career and two in 2016.

“My car is the fastest Pro Stock car in the pits right now,” said Nobile. “We made three really good runs. I’ve 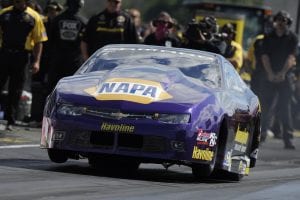 never had such a fast, consistent racecar in my entire career. To make another No. 1 run in the third session is just amazing.”

Six-time Indianapolis winner Greg Anderson was bumped to the third spot with a 6.593 at 209.72 in his Summit Racing Equipment Chevy Camaro. Anderson is second in points with seven wins this year. In fourth is Bo Butner and in fifth is Texan Alex Laughlin.

Aaron Strong raced Nobile in the third qualifying session to decide the rain-delayed Seattle final round. Strong cruised to victory in his A&J Furniture Chevy Camaro after Nobile left the starting line early. Strong claimed his first career win in only his eighth career Pro Stock race. He claimed his first career round win against Greg Anderson, then went on to beat reigning world champ Erica Enders and Butner before meeting Nobile in the final.

“When we changed to Pro Stock, it was a major undertaking,” said Strong. “We would’ve loved to do it at home with all of the fans supporting us there. It was pretty loud and crazy at Seattle. I was okay coming here and doing it in Indy. Indy has always been on my bucket list. I was excited to just go to a final and come to Indy.”

Savoie rode his White Alligator Racing Suzuki to a 6.841 at 195.19 to maintain his No. 1 qualifying position in Pro Stock Motorcycle. The Louisiana alligator farmer has five No. 1 qualifiers in his career. Savoie is the reigning Chevrolet Performance U.S. Nationals champion and claimed runner-up finishes at this event in 2014 and 2011. 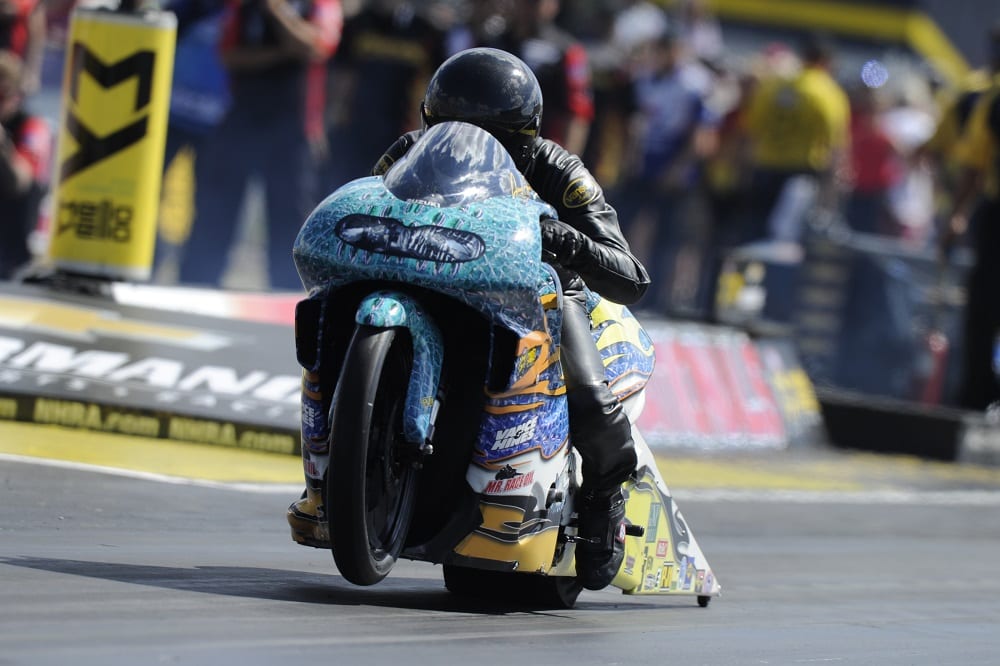 “We’ve been struggling this weekend with a couple of issues and really haven’t made a clean pass yet,” Savoie said. “The first hit today, we bogged it a little bit. The second run was fairly decent but still should’ve gone .81. We just try to be consistent and consistency wins.”

Angelle Sampey, the winningest female racer in NHRA history, moved to the second spot with a 6.851 at 194.52 on her Star Racing / Precision Service Equipment Buell. Sampey, who claimed her first victory since 2007 earlier this year at Englishtown, N.J., is a two-time Indianapolis winner.

Points leader Eddie Krawiec and his teammate Andrew Hines, who is second in points, are qualified third and fourth, respectively, on their Screamin’ Eagle Vance & Hines Harley-Davidson. Krawiec and Hines both have one win here at the Big Go.

Rookie Cory Reed is fifth and LE Tonglet, who won earlier this year at Sonoma and secured his spot in the Countdown to the Championship on Friday, is sixth.

Qualifying for the Chevrolet Performance U.S. Nationals will conclude Sunday with sessions at 11:15 a.m. and 3:30 p.m. and set the field for Sunday’s 11 a.m. eliminations.