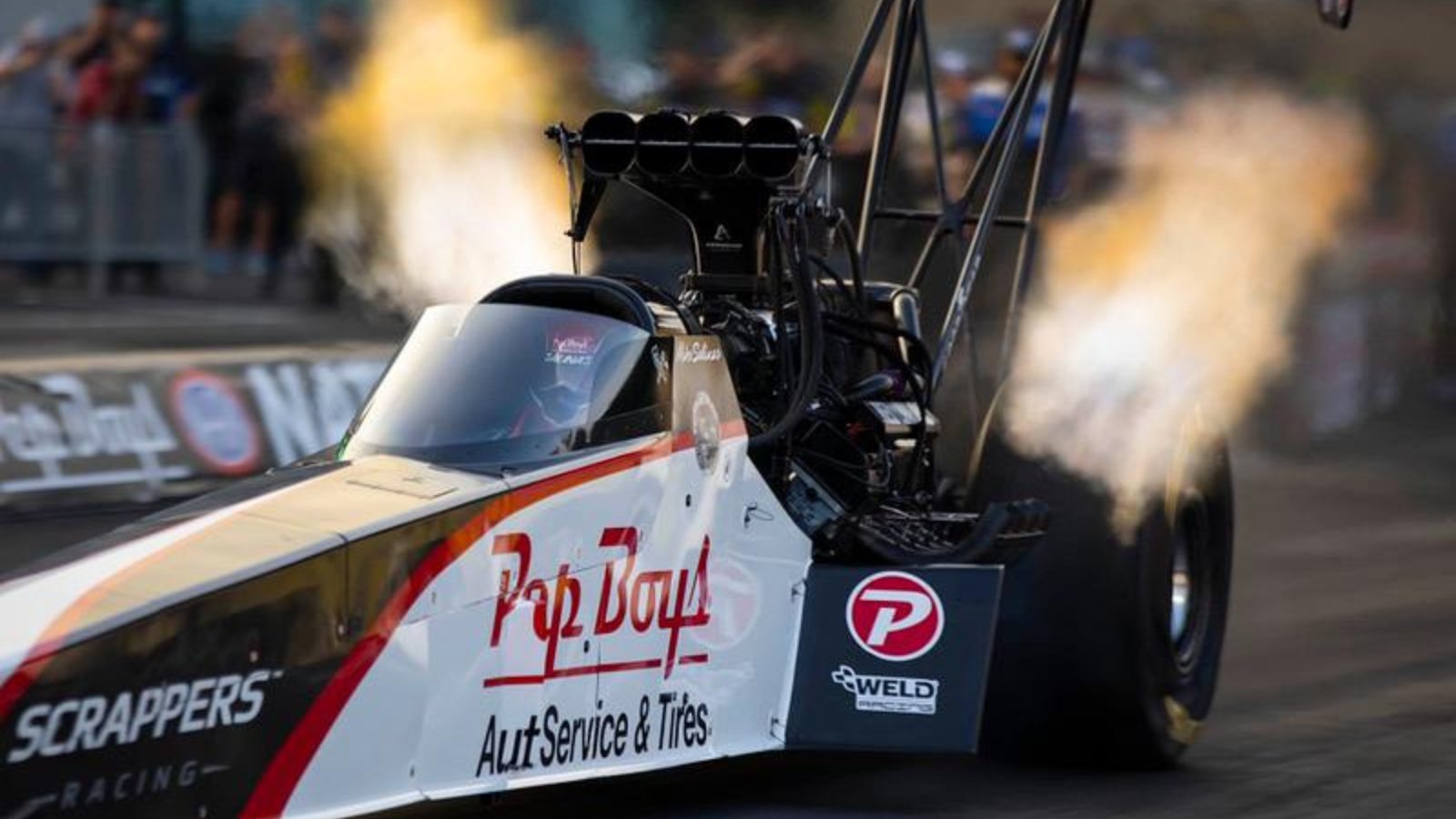 The Scrappers Racing team featuring Mike Salinas in Top Fuel, Jianna Evaristo in Pro Stock Motorcycle, and Jasmine Salinas in Top Alcohol Dragster, is primed and ready to close out the NHRA Championship Drag Racing season on a high note as they roll into the final event of the year, the 57th annual Auto Club NHRA Finals at Auto Club Raceway at Pomona.

Salinas is currently third in the Countdown to the Championship Top Fuel points standings and only 66 points out from the top spot. To say that the competition in the NHRA Camping World Drag Racing Series Top Fuel category is fierce would be an understatement. There are only 199 points between the No. 1 seeded entry, Brittany Force, and the driver in the No. 10 spot, Clay Millican. Because points are worth 1.5 times more at this final event of the year, anything could happen. All eyes will be on the Salinas family patriarch and Scrappers Racing team owner as he battles for a championship finish.

“We have our work cut out for us,” said M. Salinas. “This Top Fuel category is stacked with stout competitors. It’s impressive and it means that the fans are going to enjoy a great show. Our Pep Boys/Scrappers Racing crew has been working hard all year. We are just going to keep doing what we do out there. If I do my job, we should be in a great position.”

Evaristo has a special fondness for the legendary Auto Club Raceway at Pomona. It’s where she earned her first national event win in 2019 and she would love to repeat the experience this weekend. Through a season full of tumultuous ups and downs including recovering from a crash that occurred early in 2022 during testing, Evaristo has been steadily improving throughout the season on her Pep Boys/Scrappers Racing Suzuki. She is excited to return to the home of her first win and is eager to put on a great performance for the fans.

“For me, this year has been all about getting more confident on the bike,” said Evaristo. “I’ve been working with Matt and Angie Smith and they’ve taught me so much. It’s finally all coming together and I can’t wait to compete this weekend, especially at a track with fond memories of my first Pro Stock Motorcycle win.”

Having clinched the NHRA North Central Division 3 Top Alcohol Dragster championship in the NHRA Lucas Oil Drag Racing Series, J. Salinas has had a permanent grin on her face all week long. She is fired up for the last competition of the year and is eager to hit the track in her Pep Boys/Scrappers Racing dragster. In a similar position to her father, M. Salinas, the talented sportsman driver is only 31 points behind Joey Severance, the current national points leader. She is tied in points with her McPhillips-tuned teammate, Matt Cummings.

“Being in the running for a Top Alcohol Dragster world championship is amazing,” said J. Salinas. “It’s still surreal to me that we won the D3 championship! We are going to give it our all this weekend. This crew has been incredible all season long and I’m so proud of them. We would love to end on a high note with a world championship. But no matter what, I’m happy with the season we’ve had.”