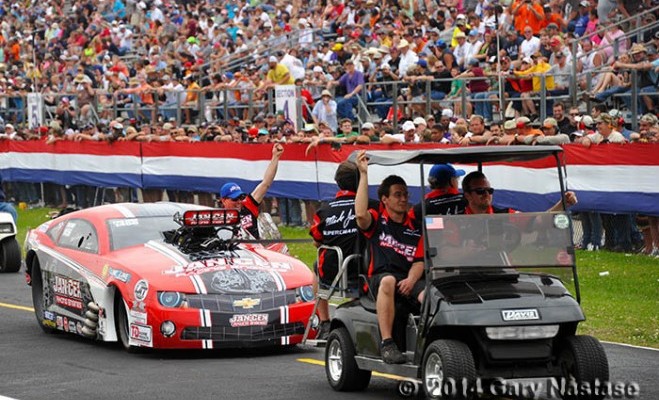 To say that things finally fell into place this past weekend for Mike Janis Racing (MJR) would be a complete understatement. It has been nothing but hard work since the season ended last year in Las Vegas in preparations for 2014. With no major partner and funding for the team headed into 2014, the team had only one option: create their own destiny and win to be able to continue on. And winning is just what they did this past weekend at the O’Reilly Auto Parts Springs Nationals in Houston, Texas.

“Honestly I don’t even know where to start,” said Mike Janis, Owner/Driver at MJR. “At the end of last season we knew with no major partner headed into 2014 that we were going to need and take the extra step to do everything in our power to make sure we had a great shot at winning these races. We kept telling ourselves that it was only going to take that first win to get the shot in the arm needed to keep the ball rolling. A complete blessing is how we look at it. This Pro Mod class is so competitive and to be able to come out on top and run up front week after week with how we are doing it is nothing more than the hard work and dedication of my guys.

“My son Mike Jr. (Crew Chief), Kevin, (Co-Crew Chief), Ernie and Dave have an incredible chemistry and really gel very well together. Without them none of this would even be possible. My three brother’s back at Jan-Cen Racing Engines and our other employees working hard while we our on the road is a very important piece to the puzzle as well. These events are not just races to us. Each event is like attending a major trade show. It is not everyday that you get to go out in front of over 100,000 people, and 100’s of racers to showcase your’s and your partners products. We use these events to our upmost advantage and it is very important to be out there marketing the business.

“This is a win that just hasn’t set in yet. We have been racing in Texas since early 2000 and never had any luck,” he continued. “It was honestly a state that we felt we just might not want to even drive through anymore, yet alone race in! After this weekend our opinions have finally changed. To see all those fans cheering in the stands all weekend was completely awesome and just shows how strong the NHRA program is. We are so blessed and we can’t thank all the fans enough for coming out and supporting NHRA Pro Mod Drag Racing at its finest. Time to celebrate for a day and we will head back to the grindstone in preparations for Atlanta in three weeks. Thank you to all of our partners, you guys are the best.”

Janis qualified 5th in the tough Pro Mod field with a 5.896 at almost 247 mph. The conditions were far less than optimal all weekend with the weather reaching a corrected altitude of just over 2800 feet and almost 130 grains of water all weekend. In the first round of competition Janis ran a 5.905 to take out the nitrous car of Dan Stevenson’s 5.955. Second round paired MJR with Ron Muenks. Muenks left with a slight starting line advantage, but the Jan-Cen Racing Engines/Mike Janis Superchargers horsepower was just too much. Janis reeled him in by the 60 foot mark and went on to run a stellar 5.896 at over 246 mph. The semi’s paired Janis with Aeromotive Fuel System owner Steve Matusek. The two both staged and Matusek left early with a red light while Janis ran it only to half track then shutting it off early.

The final paired MJR with Mike Castellana, current NHRA Pro Mod points leader. Castellana went -.009 red handing the automatic win to Janis. Janis went down and clicked off a 5.92 at almost 245 mph shutting her off a little early after seeing his win light on the scoreboard. Mike Janis now sits 2nd in the NHRA Pro Mod points – a mere 36 points behind Castellana for the lead. Next up is the NHRA Summit Racing Equipment Nationals from Atlanta, Georgia May 16-18.

“This is really an awesome day for everyone in our organization,” said Kevin Peters, Co-Crew Chief at MJR. “We set our goals extremely high in our organization and do not settle for any less. If we do something wrong, we just work harder and figure out how to fix it. If it’s something we are doing right, we still work harder to make it better. Each and everyone of our customers at Jan-Cen Racing Engines/Mike Janis Superchargers is very important to us and they deserve the best. All of our loyal customers we can’t thank you enough for all the support you show us everyday. That is the real reason we keep going as hard as we do. Seeing that smile at the end of the day is what matters most to us.”

For anyone interested in marketing/partnership opportunities with Mike Janis Racing (MJR) please contact Mike Janis Jr. at 716-628-2591 or via email [email protected]