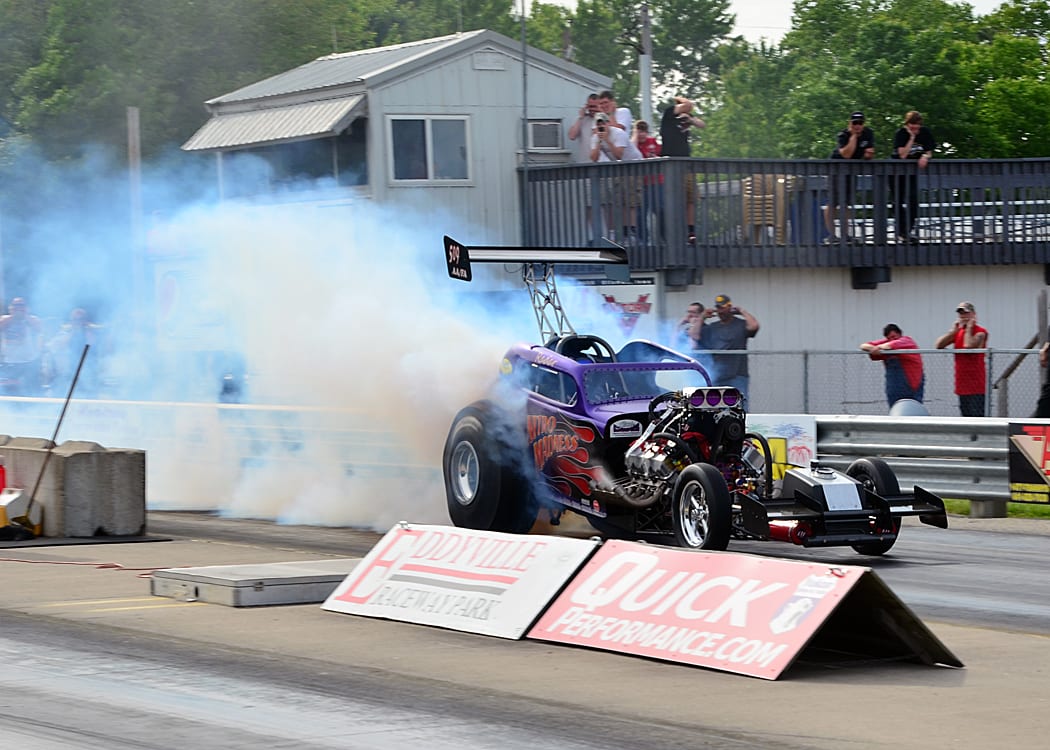 Racers and fans were greeted with beautiful weather conditions for the first-ever Midwest Pro Outlaw Eliminator at Eddyville Raceway Park on Saturday, May 23rd. The unique Chicago-style shootout is open to race cars of any type and utilizes a 4.0-second index over the well known Iowa eighth-mile drag strip. The brainchild of track owner Gerald Kramer, the Midwest Pro Outlaw Eliminator will be contested a total of four times at Eddyville Raceway Park and in its debut drew everything from blown, turbo- and supercharged Pro Mods to Fuel Altereds, front engine dragsters and more.

In the first of two scheduled qualifying sessions, Rusty Kramer laid down a 4.29-second elapsed time in just his seventh full pass on the car, but it wasn’t enough to hang onto low for the round as Roger “Radar” Lechtenberg, veteran driver of Scott Gaulter’s famed “Nitro Madness” Fuel Altered, posted a 4.10-second lap and took top qualifying honors. Dan De Vore, despite battling tire shake, posted a 4.38 in his blown Pro Mod, though fellow Pro Mod racers Neal Hinman, John Welter, and David Janes all experienced issues getting down the track.

In the second round of qualifying, Kramer and De Vore improved with 4.27-second passes, though it would be De Vore moving on to the final round against “Radar” Lichtenberg as his final qualifying effort was .0003-seconds quicker than Kramer’s.

In the final round De Vore again improved, but it wasn’t enough to hold off “Nitro Madness”, who took the win with a stout 4.03-second, 181mph blast.

“We really couldn’t have asked for a much better kick off,” said Gerald Kramer, Eddyville Raceway Park track owner and operator. “We really appreciate all the racers who came out and showed support, as well as the fans and sponsors that supported this first event. We can’t wait for the next one.”