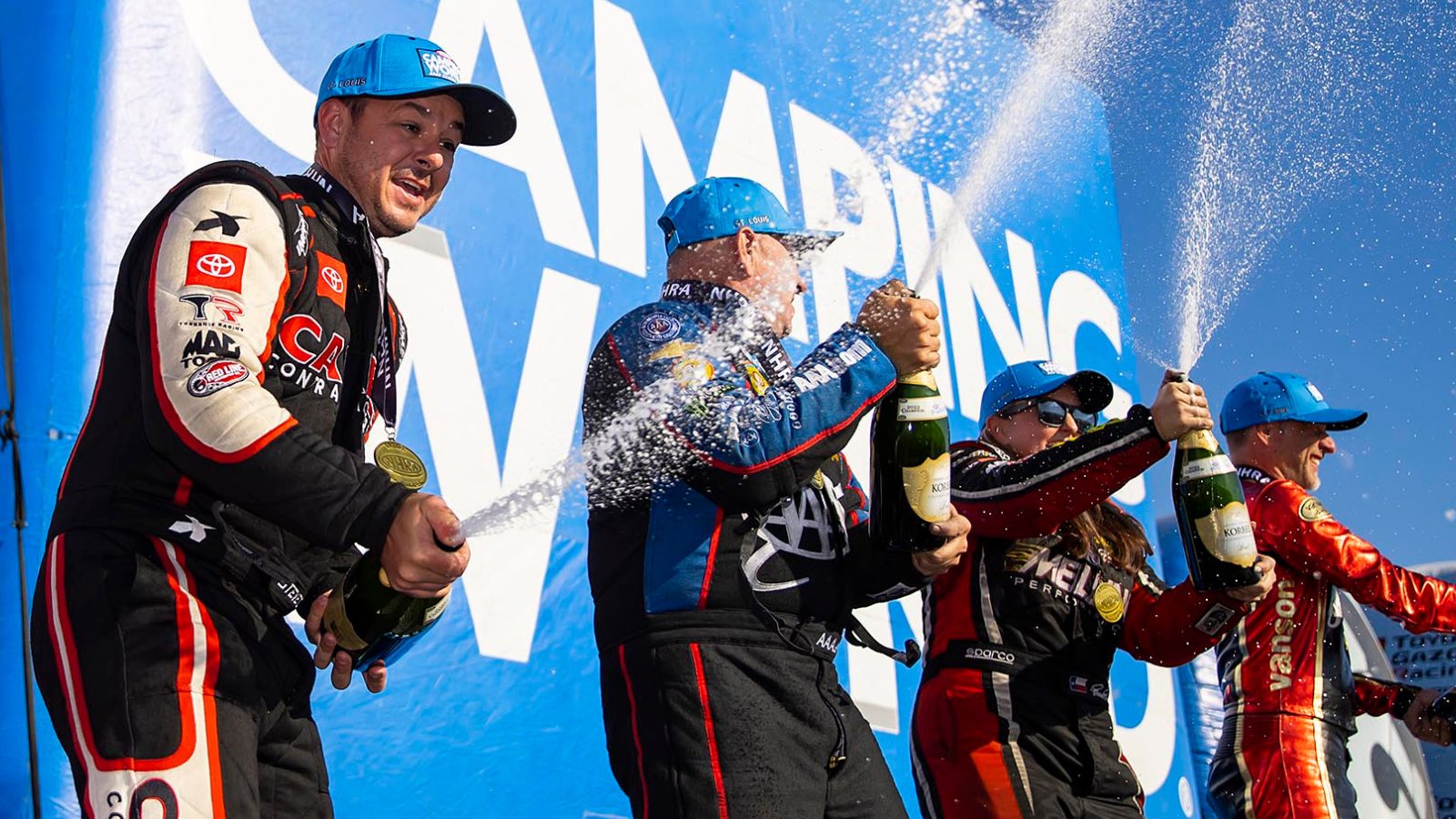 All but written out of the championship script after consecutive second round losses to start the Camping World Countdown, four-time reigning Top Fuel World Champion Steve Torrence strong-armed his way back into contention Sunday by driving his Capco Contractors dragster to a resounding wire-to-wire victory in the 26th NHRA Midwest Nationals at World Wide Technology Raceway.

Trying to become just the fourth driver in professional drag racing history to win as many as five straight NHRA championships, Torrence qualified No. 1, beat track record-holder Clay Millican in the second round and used a .027 of a second reaction time to turn back a challenge by Josh Hart in the final round. 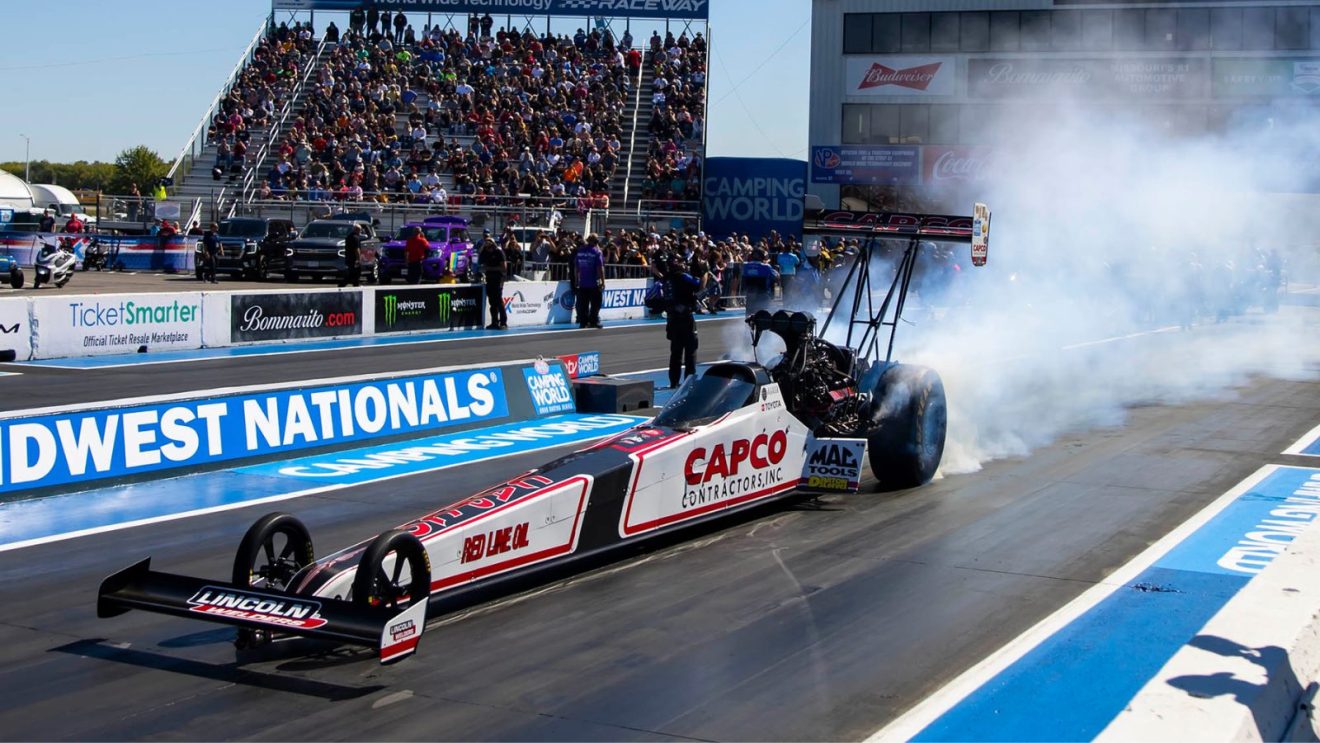 Steve Torrence executes a burnout in his Capco Contractors dragster before racing to the Top Fuel championship in the 26th NHRA Midwest Nationals Sunday at St. Louis. The win pushed Torrence to within one round of the point lead in his bid for a fifth straight championship.

“I know there were a lot of doubters out there,” Torrence said of a season in which he and his ‘Capco Boys’ opted to make big changes to an engine-clutch set-up that had dominated the tour the previous five seasons, “but we’re a family and we always believed in ourselves. This was a great weekend but, to be honest, it took all we had to get around Josh in the final.

“There’s still work to do (in order to win the championship),” he said, “but we’ve got ourselves back in the hunt and we’ll have some momentum going home to Dallas (where the Countdown resumes Oct. 14-16 with the 37th annual Texas Fall Nationals).

“Every round was a big round for us,” Torrence said of his fourth win in six years at WWTR. “Going up there against Clay (in the second round), I thought I lost. I felt like he was ahead of me. I watched him the whole way.  I knew I was late (at the start) and I was thinking, ‘I lost on a holeshot and now I’m going to have explain it (to a national TV audience)’. Clay had to tell me I won and then I got kinda happy about it.

“That .027 (reaction time), I was proud of that one,” he said of a final round performance that gave him a quick .021 of a second advantage over Hart. “None of us is Justin Ashley (the point leader and the tour leader in reaction time average), so for my old butt to do that, especially in the final, felt pretty good.”

In winning for the 53rd time in his pro career, the 39-year-old Texan extended to six the number of consecutive Countdowns in which he has won at least one race. That’s the longest active streak in the series. 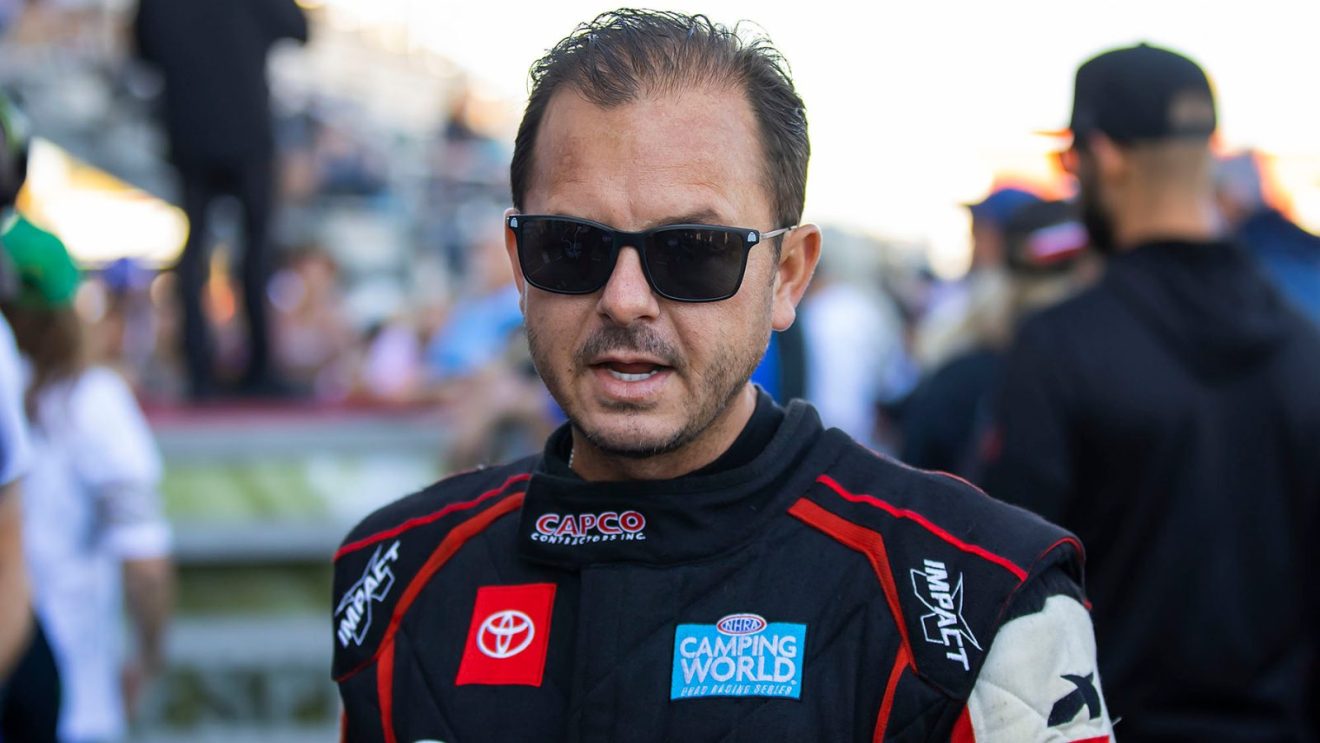 A determined Steve Torrence will move on to the Texas Fall Nationals in Dallas Nov. 14-16 in second place in Camping World points in his ongoing bid to win a fifth consecutive series championship.

By reaching the final round of the Midwest Nationals for the sixth straight year, Torrence leapfrogged Mike Salinas and Antron Brown. The victory, his second straight at WWTR, carrie him past regular season champion Brittany Force and into second place, just one racing round off the lead with three playoff races remaining.

“This team has a lot of character and a lot of pride,” Torrence said, “and it kinda rubbed us the wrong way when people started writing us off after the first two races. All we know is to just keep grinding and that’s what we’ve done. There are a lot of really good race teams out here but  we’ll just keep doing what we do and see how it all plays out in the end.”

The victory was the 13th for Torrence in Countdown races. That’s sixth most all-time, all classes, and second most in Top Fuel behind only Brown’s 15.