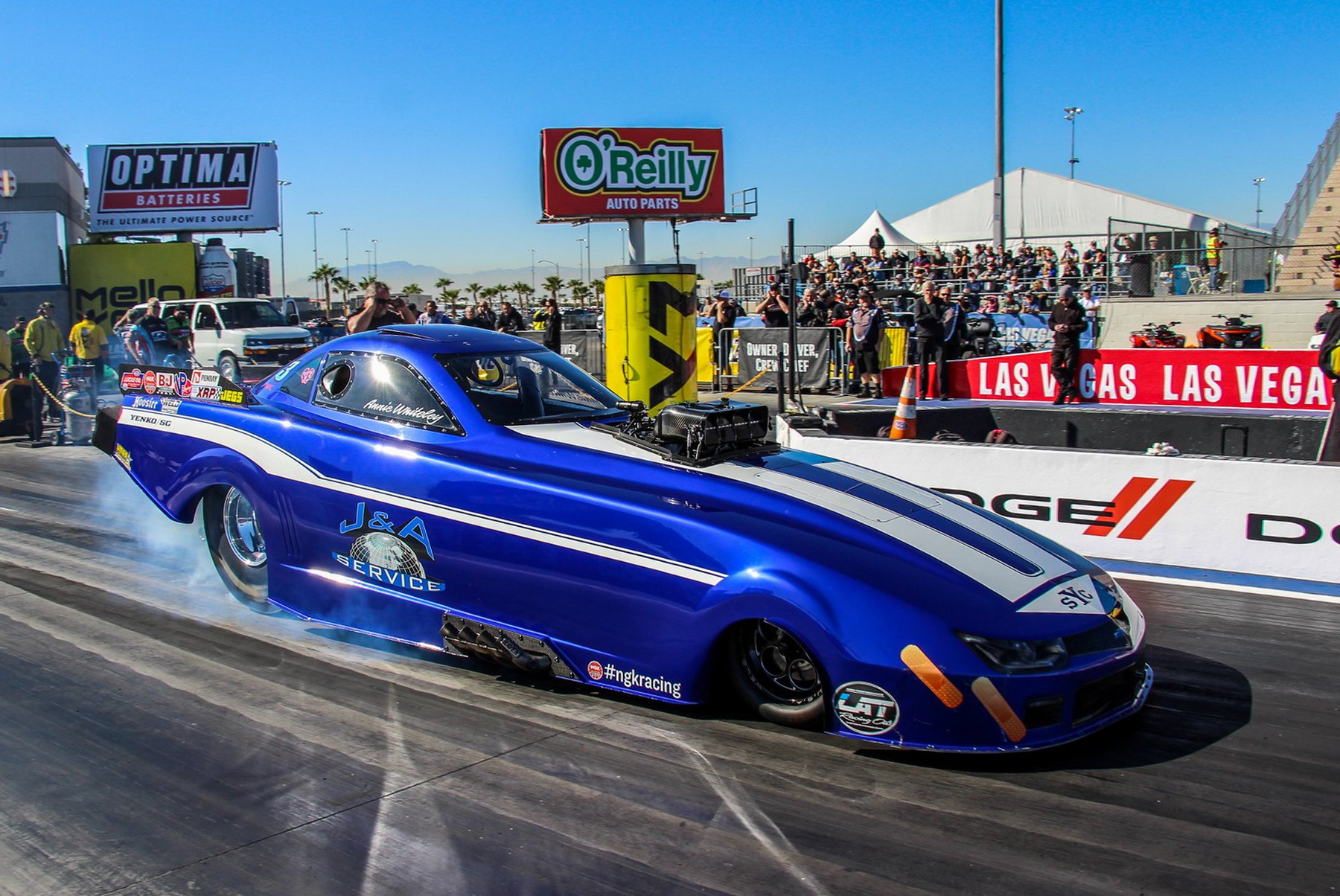 Significantly, each MWPMS event will pay $10,000 to the TA/FC winner and a $1,000 bonus to the top qualifier, with paybacks reaching all qualifiers for eight- or 16-car fields, dependant on car count. Following a four-race schedule in 2020, an MWPMS Top Alcohol Funny Car champion will be crowned with appropriate compensation, but starting in 2021, the full-season Mid-West Series TA/FC champ will receive a $20,000 end-of-year bonus, with an additional $10,000 going to the championship runner-up.

“This is all happening thanks to Jim and Annie Whiteley at J&A Service,” MWPMS founder and owner Keith Haney said. “Annie, who is one of the very best NHRA Alcohol Funny Car drivers in the country, came and raced alongside us last month at the Texas Motorplex and that’s where we got to talking about the possibility of adding their class to our Mid-West Series mix.”

Jim Whiteley, who also drives in a two-car team with son Steven in the NHRA Pro Mod series, said he was impressed by the professionalism of the Mid-West Pro Mod Series in Texas and by Haney’s desire to constantly improve the organization.

“Well, we sure had a good time there. It’s a friendly atmosphere, from the other racers to the event staff and officials, to the announcers to the live feed. I mean, to be honest it’s quite a little gig,” Whiteley said.

“And I sure don’t want to take anything away from Lucas Oil and NHRA and what they do, but I think that with a little help and a little support and a little guaranteed purses to get these cars over to try it and get their feet wet, there’s a lot of Alcohol Funny Car racers that would enjoy running this series,” he added.

“I’m thrilled to know Annie Whiteley will be racing in Top Alcohol Funny Car with us and hopefully Jim and Steven are going to come over and play in Pro Mod with us, too,” Haney said. “This man will be promoting the sport and a class that he loves and gets to race and do everything alongside his wife and their son. I mean, what could be better?”

Like all current classes within the MWPMS–Pro Modified, Top Sportsman, Top Dragster, Pro Jr. Dragster and Sportsman Jr. Dragster–the new Top Alcohol Funny Car class will compete on the eighth mile, though both Haney and Whiteley suggested that select quarter-mile races for TA/FC may be an option for the future.

However, both also stressed the financial advantage of running the Funny Cars only to the eighth mile, with Haney also pointing out most Top Alcohol Funny Car teams are family run, much like most current MWPMS entries.

“This is a working man’s series. Our teams can come and test on Thursday if they want to, but they really only have to arrive on Friday, make a couple of qualifying runs with another qualifier guaranteed on Saturday and then they go straight into racing. So they finish by Saturday night and can go home all day Sunday and be fresh for work again on Monday. It’s a real working man’s series,” Haney repeated.

“You know, most of these cars have no big corporate sponsors paying the bills, those days are gone,” Whiteley confirmed. “But you still need to bring something that’s competitive and still have a chance to pay your bills, so running the eighth mile side of it is a plus because you’re not tearing stuff up. That back half is what eats these things up most of the time.”

In addition to his team, Whiteley said he hopes to see Top Alcohol Funny Car entries from top contenders at the Ferris, TX, event such as Sean Bellemeur, Shane Westerfield, Doug Gordon and Terry Ruckman, among others.

“This is exciting. To have such a great company as J&A Service come on board and for a man like Jim Whiteley to believe in not just the Mid-West Pro Mod Series, but to believe in me and my staff and our vision for the future is quite honestly, overwhelming,” Haney declared.

“This is like a dream come true for this series to be growing the way it is. But we may actually have to rename it now, maybe the Mid-West Drag Racing Series? I don’t know yet, but yes, this is exciting.”

The next scheduled stop on the 2020 MWPMS tour is June 19-20, at World Wide Technology Raceway at Gateway, near St. Louis. Top Alcohol Funny Car will join the MWPMS tour as an official class July 10-11, at Xtreme Raceway Park in Ferris, TX.