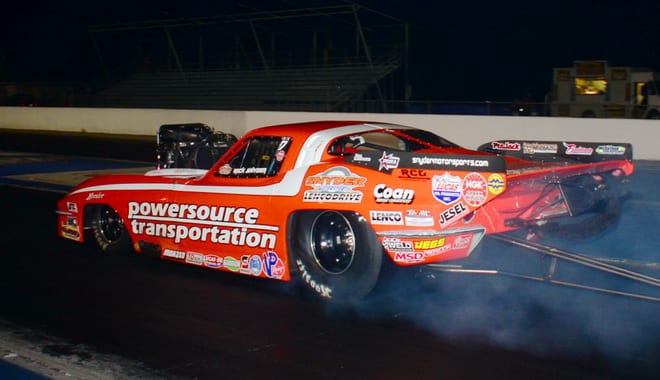 Mick Snyder and the Snyder Motorsports Team are finally ready to start another exciting season of doorslamming, drag racing action as they head to the NHRA Division 3 All-American Hot Rod Showdown this weekend (Aug. 7-8), at Gateway Motorsports Park, near St. Louis. Snyder, a former three-time NHRA Alcohol Funny Car champion and ADRL Pro Extreme champ, will be competing for the first time in Top Sportsman. 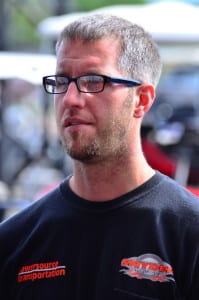 Snyder said he is eager to get a fresh start in a new class with a new engine combination, new electronic fuel system, new ignition system and new supercharger installed his trusty 1963 “Orange Menace” Corvette.

“It has been a crazy and long off season for our race team, but Snyder Motorsports has been extremely busy pedaling parts, helping customers and hitting select events on both the NHRA and PDRA schedules this season. It has been non-stop for us at the shop and the track,” he said.

“We were supposed to debut the new 1968 Camaro for the 2015 season, but it wasn’t getting done. So we moved on to Plan B and basically took all the new ideas and innovative products and put them in the same Corvette we have been campaigning for the past five seasons. Not an easy deal, it had an ‘elephant in a school bus’ kind of feel to it. Taking a championship-winning Pro Extreme car to legal Top Sportsman trim was a challenging, yet enjoyable adventure.”

But innovation is something Snyder Motorsports thrives on, both as a race team and a business, and the innovations in this new blown Top Sportsman venture are monumental. The New ComSyncEFI System, which controls the engine, fuel and ignition electronically, has simplified the entire engine management. ComSyncEFI controls the electronic fuel injectors, the coil packs and even the shift light and rpm rev limits. ComSyncEFI also does the data recording for the car.

“EFI and simple. Those are two words I would have never put together,” Snyder said with a smile. “But after a test session at U.S. 131 Motorsports Park, I was amazed at all it could do. It took all the ‘Supposedly, ComSync can do that’ to ‘ComSync does this and this and this’. It even had my dad, Larry, excited at the possibilities.”

Snyder said the team will be making some test hits at St. Louis with Ryan Micke on Thursday before the event.

“We want to get some more laps on the new combination, both the ComSyncEFI Management System and the VED Hemi heads. We got a lot of changes going on here and we need a few laps to get it all sorted out,” he said. “This car is a lot different from when it won the PDRA Dragstock race at the end of last year in Pro Extreme. It gained 300 pounds, a DMPE roots blower, an Aeromotive Fuel Pump, a third gear in the Lencodrive, a new stator in the ‘Snyderized’ Coan Converter and a delay box. This is the most excited I have been about racing in quite some time.”

Snyder Motorsports would like to thank Powersource Transportation and Barb Bakos for yet another year as the fastest mover in the power-only trucking fleet. The team is also thrilled to have all of their great associate sponsors back for the 2015 season. Companies like JE Pistons, Lucas Oil, NGK Spark Plugs, R&R Racing Products, Flatout Gaskets and VP Racing Fuels make this dream a reality.

The first round of qualifying for the All American Hot Rod Showdown begins at 4 p.m. Friday. Qualifying continues on Saturday with a third and final chance to make the 32-car field beginning at noon and eliminations scheduled for a 4 p.m. start. For up to date information please log onto www.dragracecentral.com