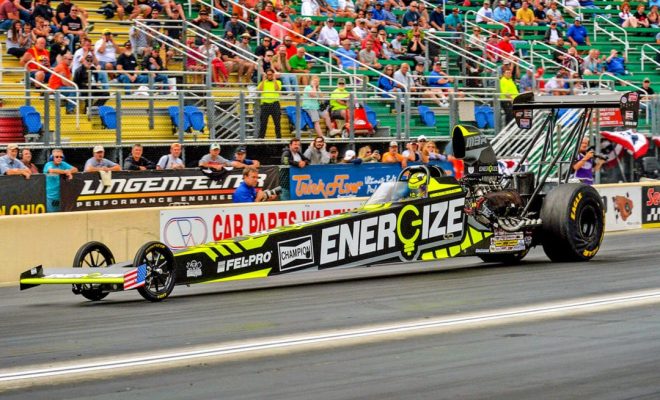 In a weekend plagued by persistent rain showers, Michalek Brothers Racing (MBR) was unable to gain traction in their opening race of the 2018 season.

“Tough weekend overall,” said Corey Michalek. “Between fighting the weather, fighting the fuel system, and missing a qualifying session, we were never able to get a handle on the car or gain any momentum. The first round exit was certainly a dose of reality coming off of our runner-up finish in Charlotte at our last race.”

MBR’s opening qualifying lap of the weekend, an early-shutoff 5.402 at 249.82, brought a sense of optimism for the team while coming off a 9 month hiatus since their last race. After an aborted run plagued by ignition problems in the second qualifying session, Q1’s time would end up being good enough for the #12 qualifying position to set up a first round matchup against perennial Top Alcohol Dragster front-runner Duane Shields.

In the first pair on Sunday afternoon, Corey and Shields left the line together, but the ENERGIZE A/fueler overpowered the track allowing Shields to streak away for the easy victory with a 5.338 second pass at just under 273MPH.

“Outside of the encouraging early incremental numbers during Q1 that got us in the field, we struggled to gain any momentum on track,” said Corey. “We’re a team that swears by not beating ourselves, and smoking the tires at the hit during the first round of eliminations really left a sour taste in our mouth. Kyle, Chase and Clay Copeland, Cory Cox, and Nate Van Wagnen went straight to work when we got back to the pits and that’s a group that won’t rest until we get this thing figured out. I’ll be making as many mental runs as I can until our next race to be ready to go in the driver’s seat because I know they’re going to bring a car to the starting line that’s ready to run a number.”

“On a positive note, debuting our partnership with ENERGIZE could not have gone any better. We are so appreciative of the support from Bill Bader, Jr. and his family. The Norwalk fans had fantastic feedback all weekend long about the appearance of the car. We truly could not be more proud of how everything turned out and can’t wait to bring the car back to the track in August for the Night Under Fire.”

“Despite the car not running the numbers we hoped for during the event, we left the track feeling confident we know where to focus our efforts to get the performance back on track,” said Kyle. “Every run still presents us with new opportunities to better understand the car, and with only 13 runs on this car to date, we know we have a lot more to learn. However, we have come a long way over the course of those 13 runs, and I can’t wait to see where we are after another 13 runs.”

Michalek Brothers Racing now shifts its attention to August 11 for drag racing’s biggest single day event: the 41st Annual Kelly Services Night Under Fire. MBR will be squaring off against Gutierrez Brothers Racing in 2 rounds of head-to-head matchups under the lights in front of a standing room only crowd.