With a national record, two final round appearances and one victory through two events in the 2019 NHRA Pro Mod season, Stevie “Fast” Jackson has grabbed everyone’s attention to open the year.

But does he believe he’s sent a message to the rest of the class with his dominant start?

Jackson, though, is quick to add something to that message. The early-season success has been incredible, but there’s no rest for the big-thinking Jackson.

“Right now, it’s 9 p.m. (on Tuesday) and I’m in my shop working on making my car better,” Jackson said. “The worst thing you can do is give (tuner) Billy Stocklin a consistent, fast race car because he will pick you apart and beat you to death with it. The better car I have, the better I drive it. I’m not saying we’re going to dominate all year, because we’re not. We’re going to struggle like everybody else, but if you’re not willing to put in the hours we put in, you’re going to have a hard time outrunning us.”

With that, a message has been sent: Stevie “Fast” has NHRA Pro Mod championship visions and you’re going to have to do something pretty remarkable to keep up.

Jackson envisions a knock-down, drag-out duel that started in Gainesville and won’t conclude until mid-fall in Las Vegas. But that’s exactly the type of fight he enjoys and the good news for Jackson is he’s already got a leg up.

On the strength of his win at the NHRA SpringNationals in Houston last weekend, Jackson has a slim three-point lead over Todd Tutterow, who beat Jackson in the final round in Gainesville before falling to him on Sunday in Houston.

After that, though, Jose Gonzalez is 100 points back of Jackson in third, meaning the brash fan-favorite has already built a sizable lead over most racers just two events into the season.

The pre-season gameplan he mapped out has already gone better than planned, but it doesn’t change his mindset.

“Both of these events were stellar for a blower combination,” Jackson said. “With dry weather and good barometer, you’re going to struggle to outrun us. If you plan to compete for a championship with a supercharger car, you better do well at the first two races. Our goal in the entire off-season was to win two rounds in Gainesville and two rounds in Houston, because once we get to Bristol, Topeka and maybe Norwalk you’re going to be a tenth back from the turbo and nitrous cars.”

That’s called planning ahead, but Jackson has executed the gameplan flawlessly – minus the holeshot loss to Tutterow in the final round at Gainesville when Jackson went a record-breaking 5.643 at 253.95 mph.

He qualified third in Houston with a 5.753, but was another level better in eliminations, posting three runs in the 5.60s, including a final-round blast of 5.675 at an eye-opening 255.00 to beat Tutterow.

To get to this point, it took a different route and Jackson credits his crash in Charlotte for forcing him to re-think the way he does things.

“We’re running as well as we are because I crashed the car in Charlotte,” Jackson said. “We tried to adapt our radial tire car and we actually ended up doing pretty good with it. But learning the things that you have to learn to take something that’s not optimum and do pretty good with it makes it easier when you have the right stuff.

His first rule is to question everything, if only to make sure he’s not standing pat. He made adjustments after his record run in Gainesville instead of leaving well enough alone because there’s still more to accomplish. With his new supercharged Bahrain1 Racing Camaro from RJ Race Cars, he believes the potential is endless.

“Our new RJ car is bad to the bone,” Jackson said. “I think it’s the most technologically advanced Pro Mod in door car racing right now. We did some things that are very unique. Going 255 mph in the middle of the day in Houston is a big statement with an automatic car. Brad Anderson has given us big horsepower and Chuck Ford Superchargers is making awesome boost. Neal Chance Racing Converters has probably the most efficient converter package I’ve ever seen. And then we’ve got PRS that handles the shocks and all of it is integral to making it run, even down to Lucas Oil and NGK (Spark Plugs), it all has to be perfect. It’s a package deal.”

It also means Jackson is back to his confident, trash-talking self, a persona that was noticeably absent during the early part of the 2018 NHRA Pro Mod campaign.

With three wins in his past seven Pro Mod races, that confidence has returned. Next up is chasing a championship and Jackson is set to execute his plan to perfection.

“I absolutely have a roadmap,” Jackson said. “If I can win a round in Bristol, win a round in Topeka, maybe pick up a round or two in Norwalk and we get some dry air in the fall, we’re going to make a swing at this thing.” 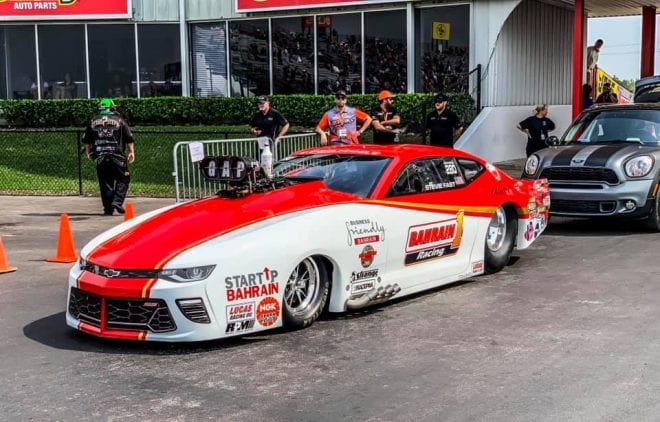