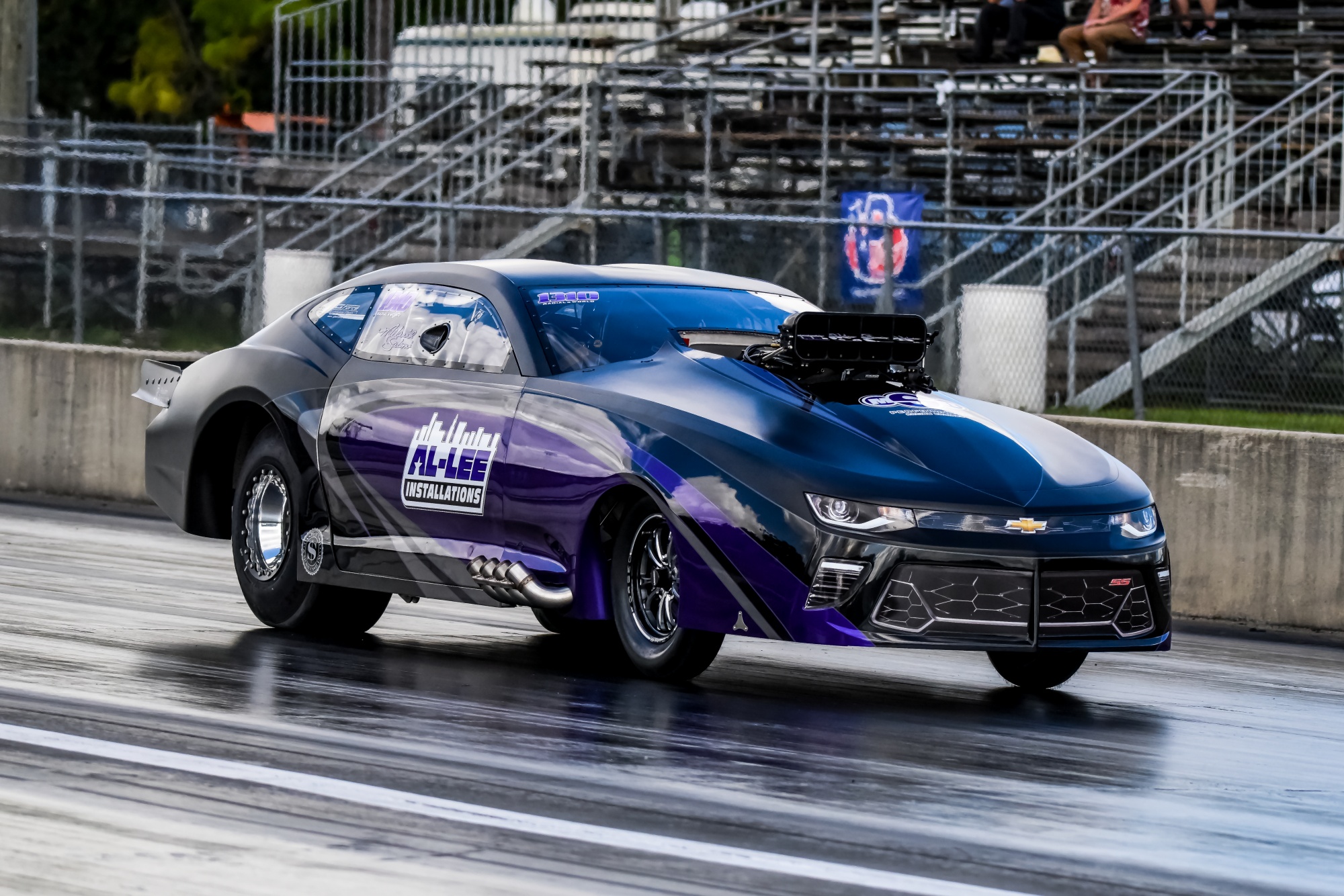 Melanie Salemi rolled into last weekend’s World Street Nationals at Orlando Speed World Dragway with a truly brand-new ’19 Camaro to debut in Radial vs. the World. It was a debut for both car and driver, as the PDRA Pro Boost standout had never raced on small tires, and the screw-blown Camaro had just been finished up at brother-in-law Jim Salemi’s G-Force Race Cars on Monday before making the trip to Florida.

A few days later, after testing, qualifying and taking out two of the biggest names in the class – recording some of the quickest passes in RvW history in the process – Salemi and her team were celebrating in the winner’s circle Sunday night.

It all started early in the week when Melanie’s husband and tuner, Jon, flew in from Australia after tuning another screw-blown car Down Under.

“Jon was fairly confident going into the whole race,” Salemi said. “He flew straight from Australia to Florida, met us there and we just got to work. He spent a lot of time on the computer this week, just changing things here and there. Everything that he did worked. Everything fell into place really nicely.”

The first few test passes showed the car’s immediate potential, as Salemi clicked it off around 300 feet and posted a 3.70 at 177 mph on the very first pass. Her minimal reservations about jumping into a small-tire car started to wash away as she made more runs and began to realize the Eddie Whalen-owned radial car is just as much fun – if not more fun – to drive than the roots-blown “Purple Reign” ’68 Firebird she runs in Pro Boost.

“The big difference between the two cars is the way the screw blower doesn’t ever stop pulling,” Salemi said. “It’s insane. It’ll be funny when I go back to the roots blower to see the difference. At the end of the day, every time I got out of that car I couldn’t wipe the smile off my face.”

Salemi qualified No. 2 in the 11-car field, recording a 3.614 at 207.72 to draw a first-round matchup with Mark Micke and his feared twin-turbocharged Malibu.

“At that point, I wasn’t really too worried about who was in the other lane, but at the same time it’s cool to even qualify for my first Radial vs. the World race,” Salemi said. “Before we even started racing, our team got together and said, ‘If we had to stop right now, we would be happy with our progress.’ It was an overwhelmingly good experience this past week.”

Things only got better as Salemi used another 3.61 at 207 to defeat Micke and his 3.99. A consistent 3.62 at 207 followed to beat Mike Decker III, lining up a competition bye run in the semifinals.

Brothers Jon and Jim took advantage of the opportunity to push the car to the edge of its limits. What followed was a remarkable .896 60-foot time, but that’s about as far as it went.

“That was cool, knowing that in the final we would have to go super-fast, we got a chance to try something,” Salemi said. “It actually started to hike the wheels up and the wheelie control took over and shut the engine off. That set us up perfectly for the final because we got to try some stuff and see what we could get away with.”

Waiting for Salemi in the final round was Stevie “Fast” Jackson, whose recent accomplishments include the 2019 NHRA Pro Mod world championship and Radial vs. the World victories at the Shakedown Nationals at Virginia Motorsports Park and No Mercy 10 at South Georgia Motorsports Park.

In World Street Nationals competition, Jackson qualified No. 4 with a 3.62 and defeated Ziff Hudson and Brian Markiewicz with a pair of 3.63s in the first two rounds, then used a holeshot advantage to beat tuning customer Marcus Birt’s 3.57 with a 3.58 in the quickest side-by-side race in RvW history.

Salemi flipped the script on Jackson in the final, though, as she left first with a .007 reaction time to Jackson’s .047. Her Mike Stawicki Racing Engines-powered Camaro held the lead through the eighth-mile stripe, firing off a 3.583 to Jackson’s 3.585.

“Normally, as soon as I go through the lights I get a radio call saying how fast I went, if I won, so on. Well, I got nothing,” Salemi said of the moment she realized she won. “Typical of my crew when I win a race – they’re all excited and celebrating on the starting line. But luckily I had looked up at the scoreboard and knew I won. I left the line and never saw him.” 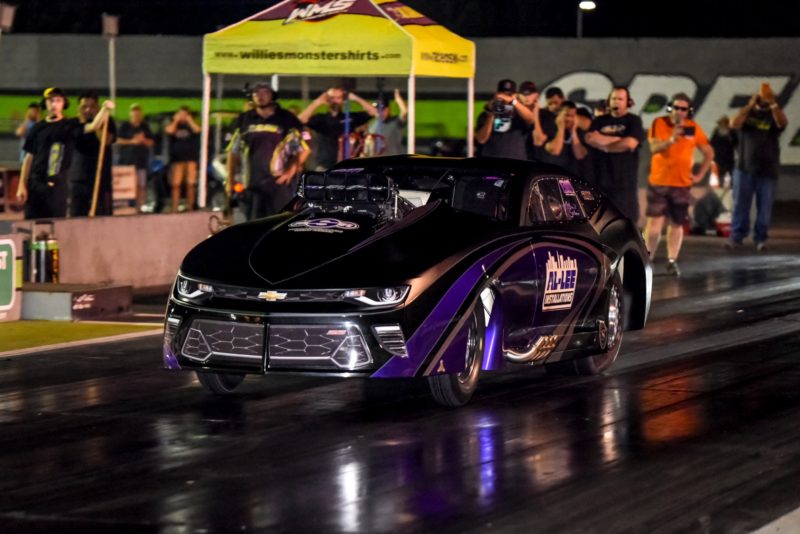 The standout weekend performance was exactly what Salemi and her team needed to fuel their offseason efforts back at the G-Force Race Cars shop near Buffalo, New York.

“I know we’re all super excited to keep carrying on with what we’re doing,” Salemi said. “It really put our team in a good spot with Eddie and Jim and Jon and Mike Stawicki, everybody who has a part in this and helped us get this car finished. For the last few weeks, the guys at the shop, and Evan and Lucas, they all put everything on the back burner to get this race car finished so we can go out and prove that we know what we’re doing. The whole deal that happened this week just makes all of it worth it and pumps us up to want to keep going and get to the next race.”

The Camaro, dubbed “Purple Reign’s Sidepiece,” will make its next appearance in the Liberty’s Gears booth at the PRI Show in Indianapolis next month. It will return to the track in January for the U.S. Street Nationals at Bradenton Motorsports Park in Florida, with additional plans to run at Duck X Productions’ Lights Out and Sweet 16 3.0 races at South Georgia.

“After that we’ll carry on with radials or maybe put big tires on it for a couple races,” Salemi said. “You never know.”

Salemi will also continue to campaign her “Purple Reign” Firebird in PDRA Pro Boost competition in 2020.