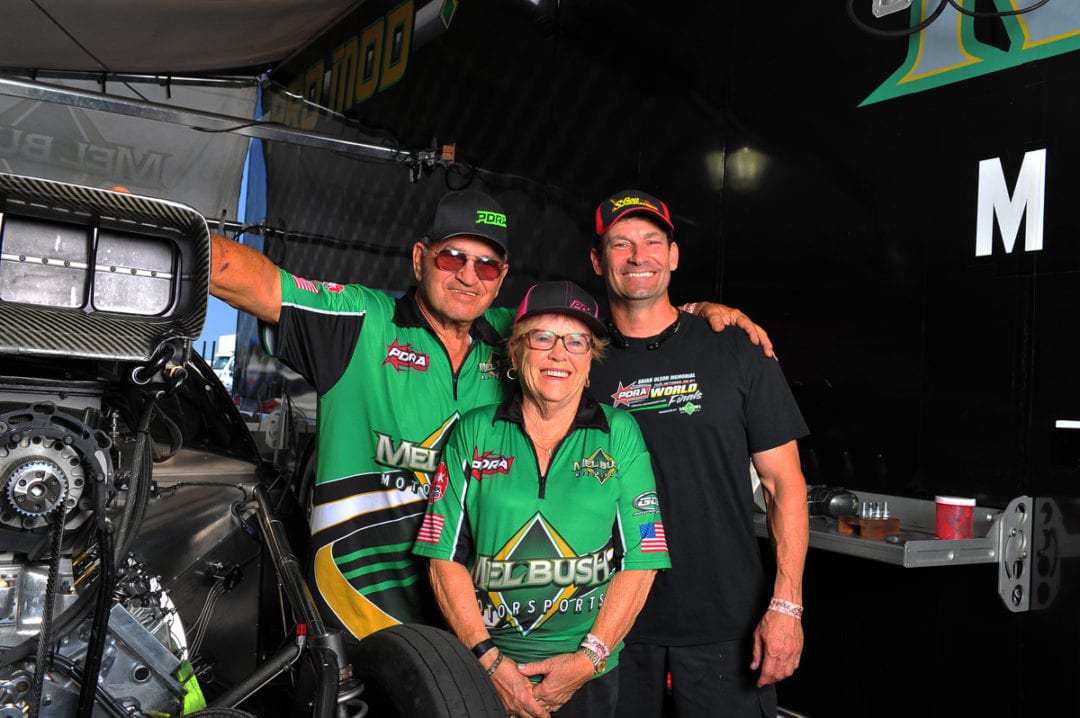 Mel Bush spent 45 years running his construction company before retiring last year. Rather than spend his well-deserved time off on the golf course or relaxing the day away in a retirement community, he and wife Johanne can be found in the PDRA Pro Extreme pits. The owners of the Mel Bush Motorsports ’15 Corvette driven by Tommy D’Aprile, the Bushes have been nursing a decades-long addiction to the thrill and camaraderie offered by the sport of drag racing.

“We keep saying we want to get out of it – we’re getting old – but it’s so hard because you become friends with so many people out here,” Mel says. “And they’re not just competitors, they’re real friends. Jason Scruggs, Brandon Snider – there are just so many people we’ve become really good friends with over the years, and it’s hard to walk away from that. We keep saying, ‘Well, this is going to be our last year.’ We just keep going and going. It’s a lot of work in between races, but once you get to the track, it’s so worth it. It’s just so much fun. I don’t know how I would react to not doing it anymore. I’d be like a lost soul.”

Mel and Johanne have been going to the dragstrip together since the early Sixties. Mel drove a ’62 Chevy 409 in Super Stock, racing in New York with the likes of “Dyno Don” Nicholson, Shirley Muldowney, and Bill Lawton, driver of the legendary Tasca Ford entries. Bush stepped away from the sport in the late Sixties to raise his family and didn’t return until 2001, starting out with a fast bracket car and progressing to Top Sportsman. With D’Aprile behind the wheel, Bush moved up to ADRL Pro Extreme and NHRA Pro Mod competition before settling into the team’s current home in PDRA Pro Extreme, doing it all with Johanne by his side.

“My wife is so supportive of this,” Mel stresses. “People can’t believe that she still likes this drag racing. She loves it. She wouldn’t miss it for the world.”

“Well, I married into it,” Johanne laughingly replies. “We used to drag race before sanctions were around. We used to drag race on Genesee Street in Utica, New York, before we were even married. If we didn’t drag race, there would be nothing else for us to do because we’re retired. We want to keep motivated and keep our minds active.”

With one of the most professional operations in the Pro Extreme pits, Bush is certainly kept motivated and active as he oversees the operations of his screw-blown Corvette, which won this year’s season-opening PDRA Southern Extreme Nationals and reached the final round at the next two races, GALOT and Darlington. “You can allow this drag racing to consume as much time as you want. In my case, I just love it. I eat, sleep and breath it 24/7,” Bush adds.

And while Bush feels the side effects of the sport – namely, the rising costs associated with fielding a top-tier Pro Extreme car – he finds the positives far outweigh the negatives. He realizes there will come a time when he will need to back away from the sport again, but he’s delaying that departure for as long as possible.

“I don’t think there’s another sport where there’s such camaraderie with the participants. I’ll run into people I raced against 15 years ago and they talk to me like we raced against each other yesterday. It’s a real bonding that you get with these people. I’ve never experienced anything else like it. It’s just been phenomenal – and that’s what scares me about leaving it,” Mel openly admits. “It’s been a real good trip for us.”