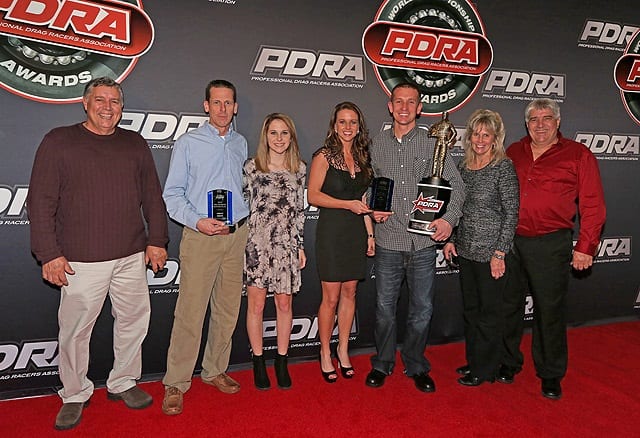 It’s the 5th Pro Extreme Motorcycle (PXM) championship (2 PDRA, 2 ADRL, 1 AMA/Dragbike) for the 30 year-old Ohio racer and his McKinney Motorsports team, but this one was more of a struggle than the previous titles.

“We come off last year pretty good,” said McKinney. “The first two races this year were great.” And indeed they were, with Eric winning both and running PDRA’s first 3-second, eighth mile, motorcycle pass.

“Then Ashley (teammate, tuner, and first-ever 3 second PXM pilot Ashley Owens) tried a few things with the Firestorm (nitrous controller) box and we got sidetracked. We got behind, and with the kind of surface that the Traction Twins (brothers Cale and Cody Crispe) put down here at the PDRA, you can’t test anywhere else and get results you can use. Track prep is a black art, like mixing nitrous and gasoline, and no one does it better than the Twins.”

At the same time that the McKinney team got side-tracked, the rest of the field caught up quick. “Ashley warned us they’d all catch us and Virginia showed it,” said McKinney. “It was bound to come, but it was like a balloon popped. We’d worked so hard to build an advantage and it was just gone.”

But the competitive spirit at the family junkyard in Hamersville is ignited and Eric vows they’ll be back tougher than ever in 2016. “The competition’s back and we’ve gotta work hard. My bike is four seasons old, probably has 300 passes on it, and it’s tired. After Rockingham, we found a tube under the seat rail that was broke. The wheelie bar broke at Maryland. We fixed all that and it’s not been as quick ever since. But it still goes straight. I’d make a quarter mile pass on it right now!”

McKinney’s bike has fallen off pretty drastically from a best of 1.01 in the crucial first 60 feet. By contrast, Owens’ team bike has had a best of .994. “He’s consistent 1.01 all the time,” McKinney said about Owens’ longer wheelbase machine. “His bike was supposed to be 2 inches longer, but it’s actually closer to an inch and a half.

“We’ve got a third bike that’s almost finished, so we’re planning to definitely go back to what we’re doing—defending the championship streak and try and go faster. A 3 second pass will not be out of the norm anymore next year, I promise you.”