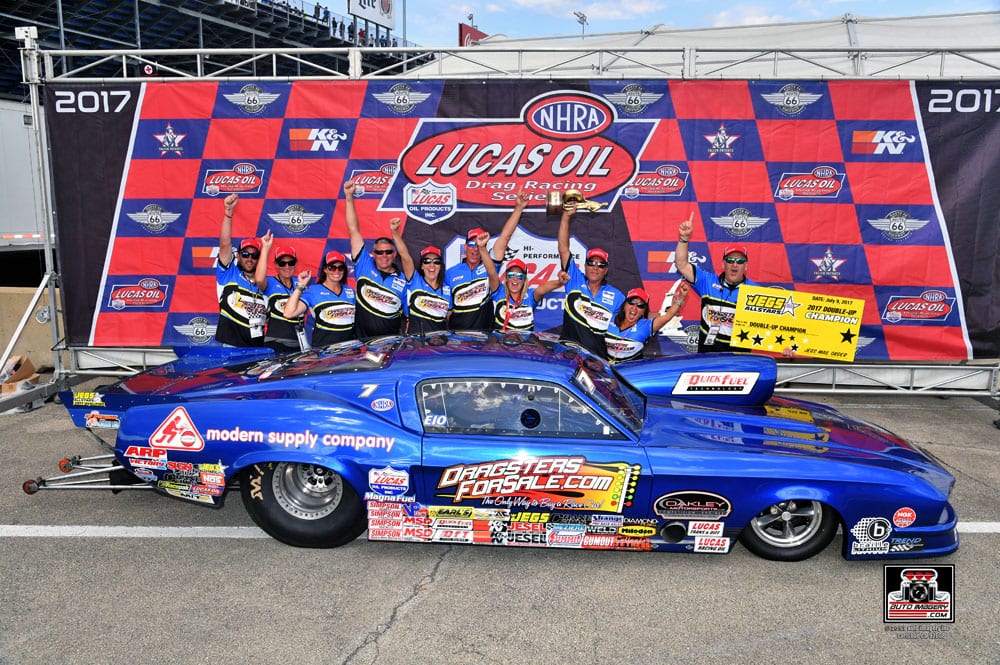 Being a competitor in the North Central Division means two trips each year to the beautiful Route 66 Raceway in Joliet, IL. This past weekend the Fallen Patriots Route 66 Nationals presented by K&N Filters and JEGS Allstars Competition completed the previous two trips for the season, and there is a good chance that Mark McDonald would like to have all the NHRA events held at Route 66 after completing the rare double of winning the Allstars and the national event in the same weekend. 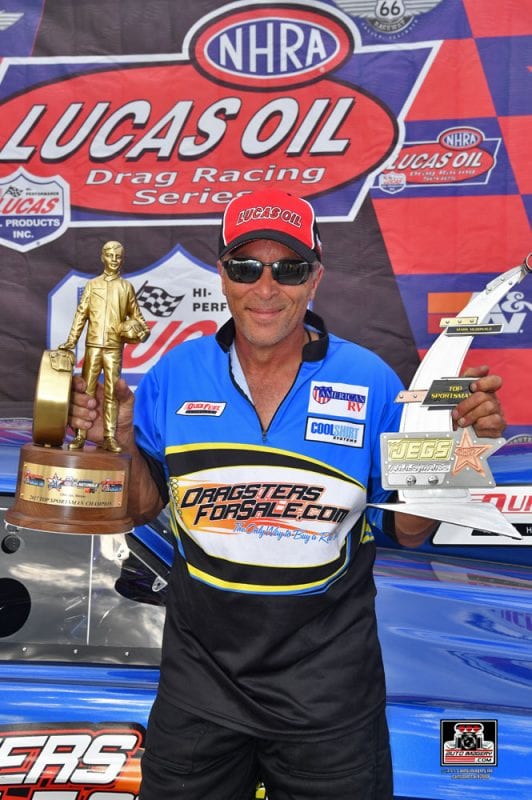 “Route 66 is becoming my favorite track,” smiled McDonald. “I reached my first Top Sportsman final here last season that kicked off this journey to be the Division 3 Allstar. To come back here and win the Allstars for our organization and sponsors as well as the Team Championship on Saturday would have been just enough for me, but to have the opportunity to close out and win the national, well, that is just something that I never dreamed.”

McDonald qualified 9th with a 6.665 at 206 mph for the national event, which landed him number two in the qualified eight-car field for the Allstars. The Modern Supply ’67 Mustang laid down three consistent attempts all in the 6.6-second range. The field was set and it was time to do battle.

“The competition was tough in the field, the car was extremely good and fortunately, I made fewer mistakes than the drivers beside me. I had a single at four cars, which helped, I just never really got comfortable with the tree on Saturday. However, when you are chasing most of the competition it can play into your advantage, as they say, it was my day,” exclaimed Mark.

The focus of enjoying the win lasted for a few hours, as McDonald had already competed in two rounds of the national event eliminations prior to competing in the JEGS Allstar event, which meant the opportunity to double was real.

“Saturday night we enjoyed a little dinner, my son, daughter in law and brother in law were here, which was just great because I am going to be a grandpa soon, so the baby already has a winner’s circle appearance,” laughed McDonald. “We serviced the car prior to relaxing, going to bed knowing you put the car up after making solid laps down the track while the competition is watching does have a small advantage, yet you cannot take anyone in this class lightly,” McDonald noted.

The Sunday matchup would be with someone McDonald is very familiar with, that being the tough husband-wife team of Curt and Leanne Fredrich. They matched up earlier in the year at the Norwalk Divisional where McDonald needed the win light to become the All-Star.

“My run with Curt was a tough one again, Curt and his wife race like most of us do, husband and wife team. Curt was wheeling that Camaro good, he is tough, he is.001 up front and just takes a tick too much at the stripe, that’s twice now my light was on, I know his time is coming when my light is just not going to come on,” smiled McDonald.

McDonald’s competition for the rest of the event were the likes of former Division 5 Champ Jim White and ultra tough bracket racer Todd Ewing. Mr. White red-lighted his chance away in the semi’s, and the final was set with Todd Ewing. 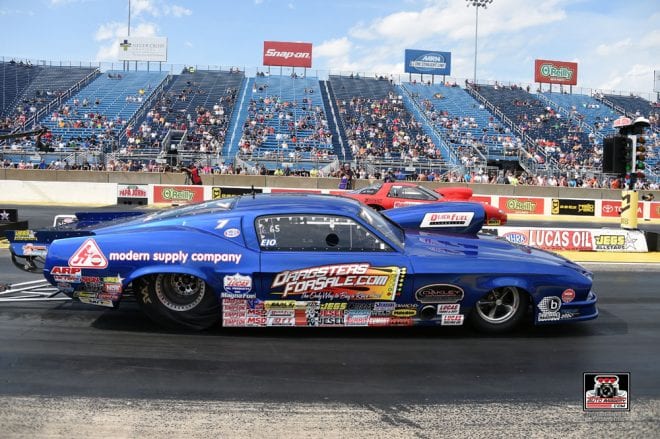 “Todd is an experienced racer, he has won a lot of money in different cars, you can’t take anyone lightly and I was able to move first and I believe it made for a more controllable race, I wasn’t sure until I saw that light, and when I did, it completed the most rewarding 7 rounds of racing I may ever have the opportunity to win, it is truly a dream that I won’t mind enjoying this for awhile,” McDonald laughed. “Hey another winner’s circle for the grandbaby,” grinned Mark.

Mark extends his deepest sincere appreciation to his wife Deidre, Charlie Evans, JB and Torrie Strassweg and all of the texts, mentions, and posts about their great weekend, a huge shoutout to the JEGS Staff and the Coughlin Family for putting on an event for the sportsman competitors.