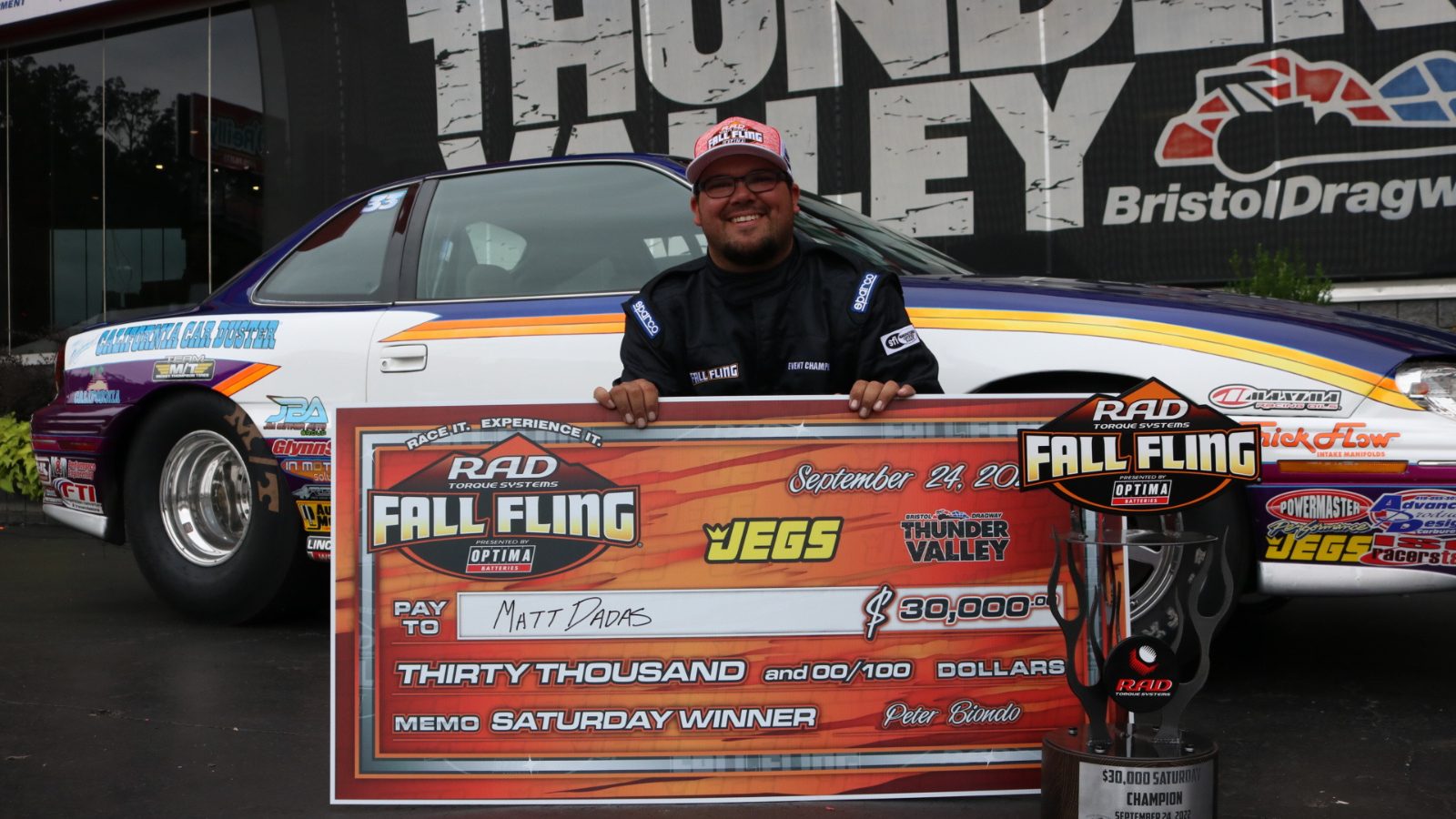 The final day of the RAD Torque Systems Fall Fling presented by Optima Batteries at Bristol Dragway saw a five hour rain delay on JEGS Performance $30,000 Saturday. With 648 entries to run first round, the Fling Team attempted to complete as many rounds of eliminations as possible Saturday afternoon and evening within the window of maintaining a safe racing surface. As the sun went down and temperatures dropped, dew began to roll in leading to race officials making the call to end Saturday’s racing activities after the completion of round 2.

Dadas used a .002 reaction to advance past Pollard while Holston knocked out Miller, Friday’s $100,000 champion. Law let go just .001 red, which earned Nelson a place in the next round.

In the semifinals, Dadas went down the track on his solo shot to the final round. On the other side of the ladder, Holston fouled out with a .003 redlight while Nelson laid down a .012 package after being .008 and dead-on four.

After 648 cars staged up for first round, it came down to two in the door car versus dragster final round where one of the drivers would become a first-time Fling event winner. Dadas let go .001 in his ‘98 Grand Am to be .016 total, locking out Nelson to secure his first Fling victory for the JEGS Performance $30,000 payday. Dadas had also made it down to six cars in the $100,000 main event.

The Kyle Seipel Never Give Up Award was presented to Mark Kidd of Twin Falls, ID for his comeback effort after breaking an axle in the middle of Wednesday’s eliminations. After replacing both axles and center section, Kidd laid down consistently good laps and carried two entries into round six of the $100,000 main event. He was given $1,000 and a custom crystal plaque courtesy of Ivey Hutto’s Golf Cart Sales and Service.

Two spectacular performances over the week from both Ray Miller III and Matt Dadas made for a tough decision in crowning the 2022 Fall Fling MVP. With consideration for both racers’ round-by-round statistics and round wins, the Fling Team used Miller’s $100,000 event win as the deciding factor. Miller received a $1,000 bonus and a Todd’s Extreme custom-painted Impact Racing helmet.

The RAD Torque Systems Fall Fling presented by Optima Batteries concludes the 2022 Fling Race Series season as the largest Fling in the thirteen years of the series with a highest car count of 674 on $100,000 Friday.

With 2023 dates to be announced soon, the Fling Team has put up a $5,000 bonus in a “Race To 5 Wins” for the first driver who wins five Fling events with a purse of $20,000 or more, sure to make next year’s season more competitive than ever.