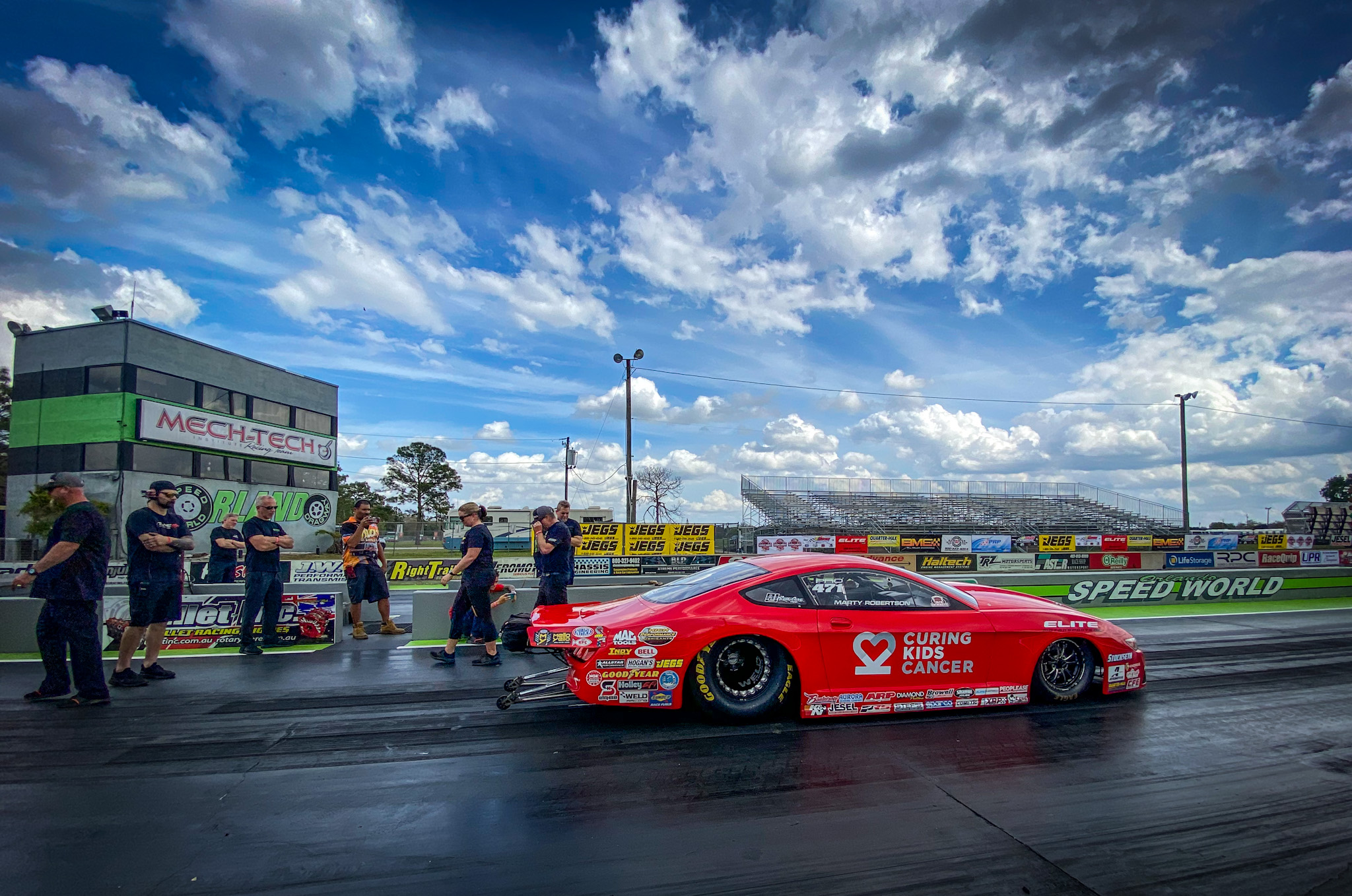 By the time Marty Robertson got out of his car on the top end Thursday at Orlando Speed World Dragway, there was a contingent of people already waiting on him.

A group of crew chiefs, team members and drivers from Elite Motorsports were there to congratulate the Pro Stock newcomer, celebrating a new career-best run of 6.623 at 207.94 mph in his Curing Kids Cancer Mustang during testing for this weekend’s Drag Illustrated World Doorslammer Nationals presented by CTech Manufacturing.

Robertson lowered it on Friday before the first round of qualifying, but Thursday’s run also represented another significant step in his development and improvement when it comes to driving in the new class.

“We were pretty pleased,” Robertson said of the run. “The crew came down to the top end to congratulate me, so that was pretty awesome. We’ve been able to get quicker and quicker, and that’s been exciting. Erica (Enders) and Jeg (Coughlin Jr.) have been very encouraging, so I have to give them a lot of kudos for their help.”

It furthers an exciting time for Robertson, who qualified for his first career race in Pro Stock at the most recent event in Phoenix.
That represented a major victory for the former Radial vs. the World standout, who has embraced this new class with open arms. He continues to be thrilled by the challenge and is diligent about improving his technique with each pass, already seeing things pay off.

Thursday’s test run marked a big step in that regard, and Robertson followed it up by going 6.61 at 197 during testing on Friday, shutting the car off early after another solid pass. Robertson also lauded the move to the Mustang that team owner Richard Freeman campaigned a year ago.

“We changed cars, so it’s more comfortable,” said Robertson, who changed cars in Phoenix. “This one fits like a glove. Having that comfort allows you to focus on the things you should be focusing on. There’s a lot of stuff going on, and you have to do everything perfectly. There’s been a couple areas where I’ve been inconsistent, but all the crew chiefs and everyone on the team have helped and given me some tips, and it’s been paying off.”

The goal is to keep moving in the right direction at this weekend’s highly-anticipated event in Orlando. The inaugural race will award $75,000 to the winner and all the top stars in Pro Stock are competing, including several of Robertson’s standout Elite Motorsports teammate.

If he continues his qualifying streak at this race, it’s a victory, while the next overall goal is winning his first round in Pro Stock eliminations.

“If we’re able to qualify, I’ll be very pleased,” Robertson said. “If we win a round, I’ll be on cloud nine. We’ve got a great team and a great car around me, so it’s just a matter of me getting up to speed. I’m very pleased with the rate I’m learning, so I’ve just got to keep trying to improve.”

The first round of qualifying at the Drag Illustrated World Doorslammer Nationals presented by CTech Manufacturing takes place at 6 p.m. on Friday, followed by three rounds at 12, 3 and 6 p.m. on Saturday. Eliminations begin at 11 a.m. on Sunday, and all action will be broadcast live at SpeedVideo.com.