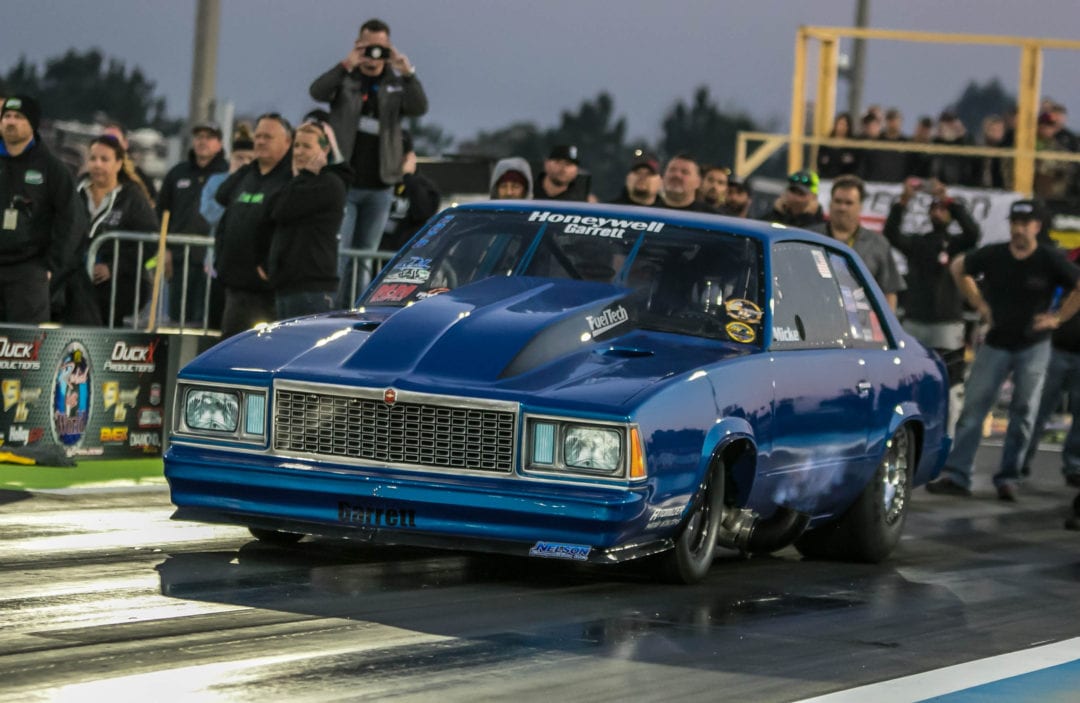 Heading into last month’s Lights Out 9 at South Georgia Motorsports Park, Mark Micke predicted someone would run 3.67 in Radial vs. The World.

It didn’t happen then, but it only took a few more weeks for Micke to prove prophetic.

It was the final blast in what ended up as a remarkable thrill ride on Thursday.

DeWayne Mills became the first car in Radial vs. The World history to reach the 3.60s, running 3.696 at 212.69 and firing the opening shot in what was a thoroughly entertaining evening session.

Stevie “Fast” Jackson, who won Lights Out 9 last month, followed moments later with a sterling 3.686, only to be ultimately outdone by Micke, who continues to get outstanding performances out of his popular ’78 Malibu.

He ran 3.74 earlier in the day, far quicker than what he was expecting, and that allowed him to push the bar even further to end the night.

“It’s there for everybody, not just us,” Micke said.

Seven additional drivers went in the 3.70s on Thursday, with four more qualifying sessions coming on Friday at the historic event.

That type of challenge is just fine for Micke, who continues to be a standout in a class that hasn’t shown any let up when it comes to excitement and popularity.

“To drive them, it’s an adrenaline rush,” Micke said. “They’re just insane. Just to work on them, they’re monsters and they’re so fun to deal with. They’re just unbelievable, to be honest with you. We’ve got first-rate crews, the best drivers, it’s all legit.”

Micke has kept out in front by staying on the cutting edge and always trying something new. He has excelled with the lock-up converter and is quick to welcome any and all challengers.

That type of attitude could bode well for the rest of what will be an intense weekend with an ultimate prize of $101,000.

“We’ve doing the lock-up stuff for like seven years,” Micke said. “We’re the old guys in the deal. We’ve got new guys coming in, which is awesome because it just motivates the shit out of me. So, they pushed a little and we’re really going to get after it now and show what we can do. It’s a team effort, and we’ve got so many guys behind us that just make this happen. It’s just unbelievable.”