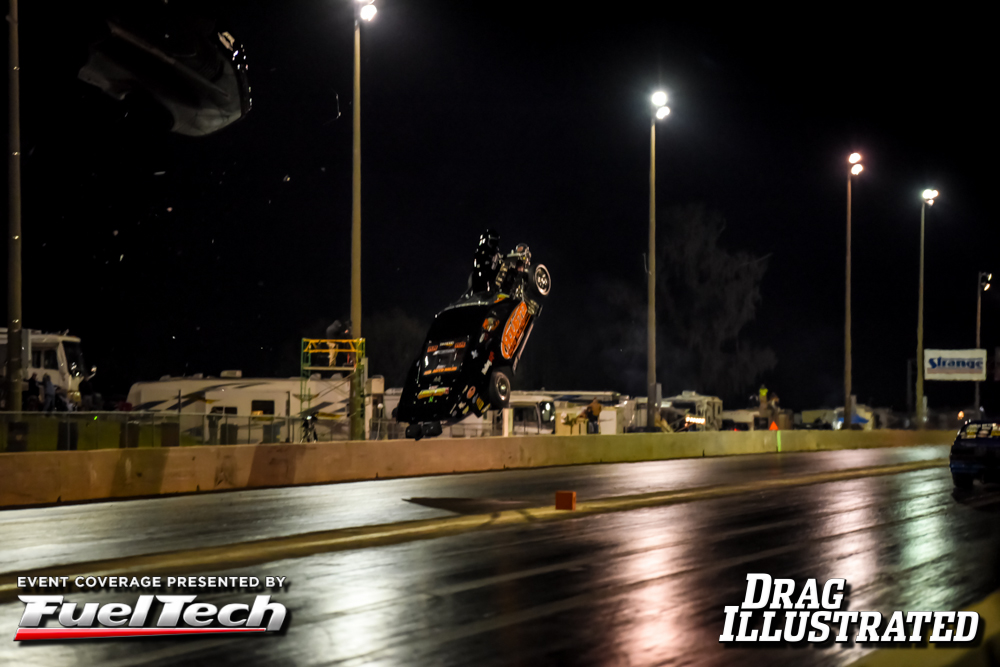 Marcus Birt stole the show on Friday during Lights Out 11 at South Georgia Motorsports Park – just not in the way he intended.

At a race known for its extreme rides, Birt raised the ante by nearly going into orbit with one of the wildest passes in RvW history.

He lifted off in his Jerry Bickel Race Cars Corvette just past the 60-foot mark during Friday qualifying, staying airborne beyond the 330-foot mark before his nitrous-powered car landed in the left lane. Birt wheeled the car to a stop without taking catastrophic damage, sending a collective gasp through the facility after what they had just watched.

“I felt the car come up so I popped the throttle. I thought it was coming back down, so I stood back in it and everything went crazy from there,” Birt said. “It’s like I went into space.” 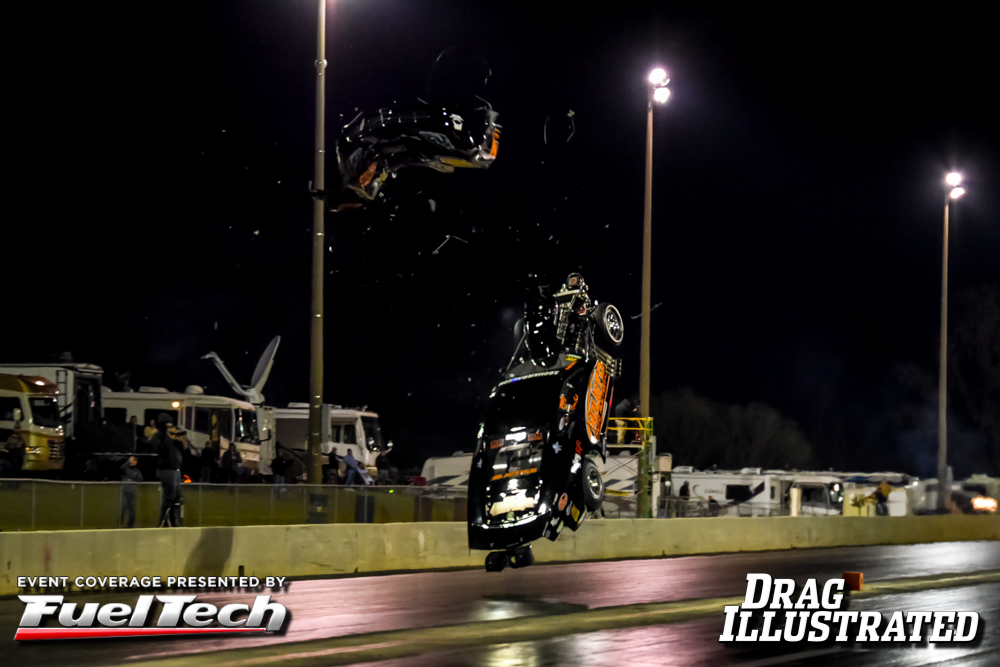 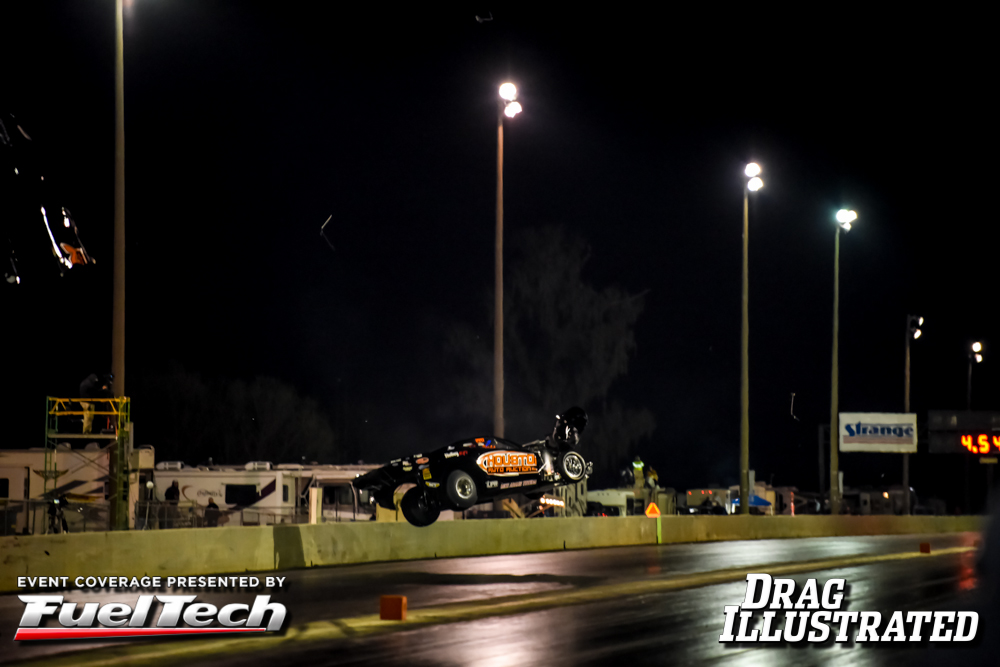 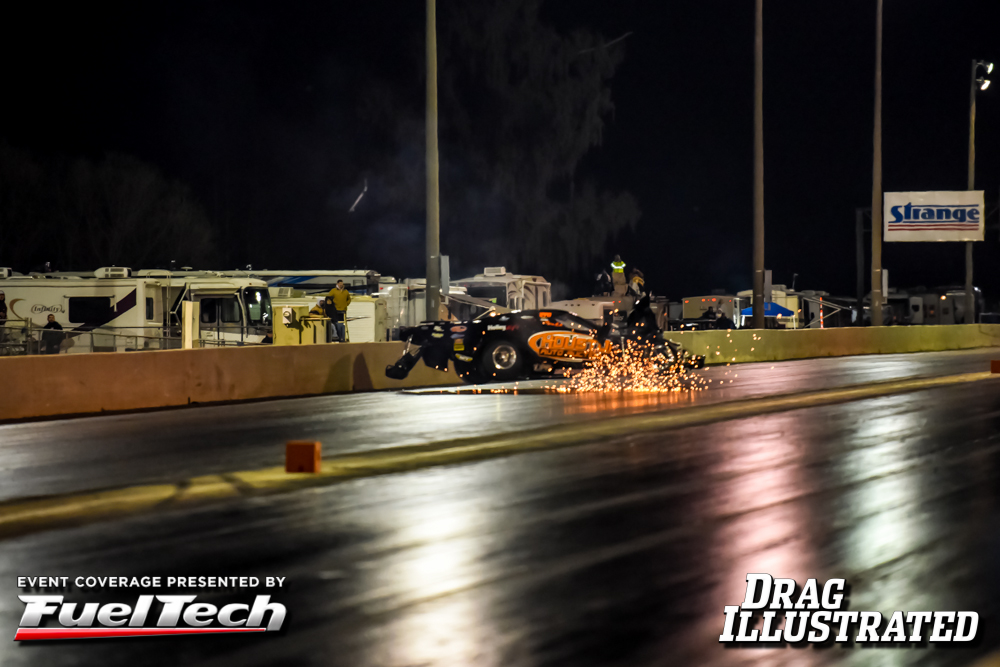 The good news was Birt avoided serious injury on what could have been a disastrous consequence.

He was checked out in the ambulance at the top end and noted his lower back was a “little sore,” knowing full well the soreness will increase exponentially in the coming days.

The bad news, however, was the damage to the car after it slammed violently back onto the track. For a car that had put together a number of spectacular runs and record-breaking performances over the past year, it certainly came at an inopportune time.

“Just trying to figure out how to fix it, that’s going to be the rough part,” said Birt, who was currently qualified fourth with a 3.625 at 204.26 mph. “That’s all I’m trying to picture in my mind. It couldn’t have happened at a worse time. It just stinks.”

As the hood blew off, Birt went skyward down the track, landing sideways in the left lane. Somehow, the talented driver gathered his bearings, yanked the steering wheel and recovered quick enough to avoid the wall or toppling over it entirely as he drifted into the right lane.

Almost impossibly, it turned into a magical save, something Birt chalked up purely to instincts. He also lamented a run that got away, looking back at what he believes would have been a spectacular run under the lights at Valdosta.

“We were going to stand on it for sure,” Birt said. “I think it was going to be on a .53-.54 pass. Once I’m up in the air, it happened so fast. I just kept looking out the side hoping it didn’t get over the wall. When I landed I was going sideways, and I just didn’t want to barrel roll.

“I turned it pretty hard left and said, ‘Please let it come back,’ and it did. It definitely could have been a lot worse. It was the wildest ride I’ve ever been in. I was probably 25 feet up in the air and I blew over the 330 cones. I didn’t even get a 330 time. It was just reflexes I guess when I landed.”

Birt’s daughter ran down the track to meet Birt, who immediately reassured her that he was fine. Stevie “Fast” Jackson, who has tuned Birt’s car over the past year, met him on the top end as well, simply glad to see his friend escaped any major trouble.

Getting the car fixed is next on the list, and Birt isn’t exactly looking forward to the huge undertaking. But he also praised Jerry Bickel Race Cars for a car that kept him safe and stayed relatively intact during the mind-boggling ride Birt went on during a Friday qualifying session that won’t soon be forgotten.

“I’ll tell you one thing, he’s got to be the best chassis builder in the world,” Birt said. “It’s just unbelievable the quality of his work. The car is messed up for sure, but as bad as it looked, (the damage) isn’t crazy.”