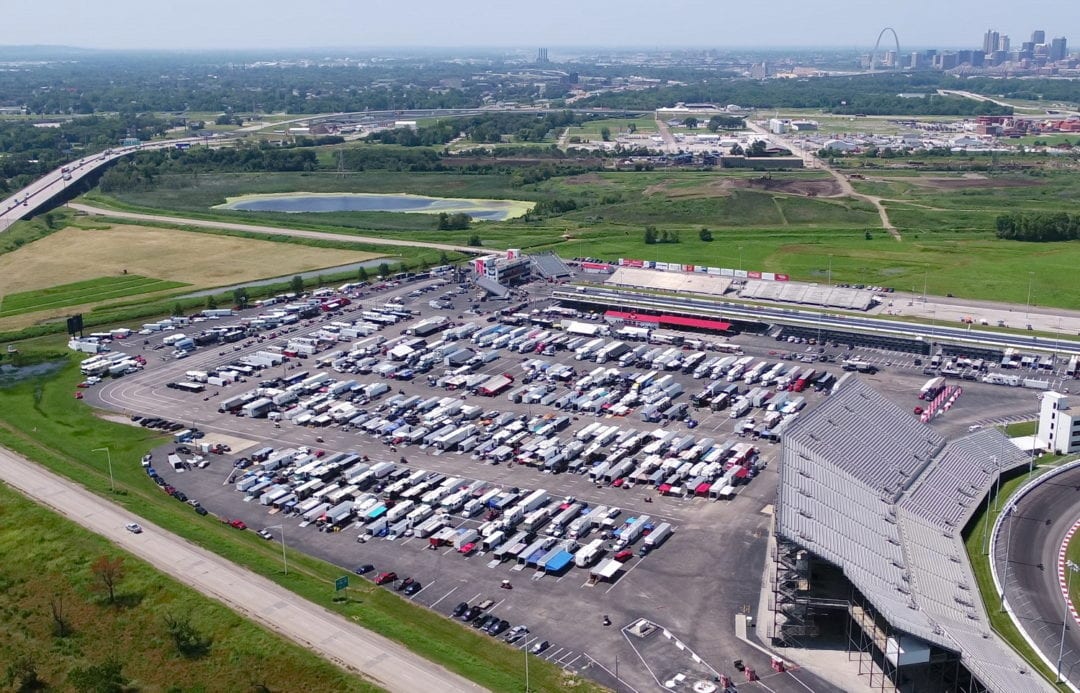 “This particular race was something outstanding, special, a history-making event,” MWPMS owner and promoter Keith Haney declared. “We had the biggest Pro Mod field in our history, the quickest field ever, it gave us our sixth different Pro Mod winner in six races so far this year, and I can’t even count how many of our racers made career-best runs—even a lot who didn’t qualify—they still left St. Louis with big smiles on their faces. And that’s what this is really all about, letting these guys shine in a series that gives everyone a chance to compete.”

A record 37 of 38 entries on the grounds made qualifying attempts, with Jason Hamstra and his screw-blown ’69 Camaro leading the way for the third-straight race with a MWPMS record-setting 3.70-seconds pass at 206.23 mph. Just two-thousandths of a second behind was Brandon Pesz, with Jonas Aleshire a close third. Maddux clocked in with a then-career-best 3.76, and the 16th-and-final starting position was secured by Duane Rister at 3.78 seconds, marking the quickest bump spot for a 16-car combined Pro Mod field in eighth-mile history.

“I was told there’s never been a quicker bump with blowers, turbos and nitrous cars all together in one Pro Mod class,” Haney said. “Even the cars for our second-chance Slammers race were fast, which really shows there can be parity. And you know what? At the end of the day the fans just want to see one thing, they want to see close racing. You know, we’ve had some armchair critics accusing our rules of being index racing, but they really don’t know what they’re talking about. In fact, you could turn the clocks off. People don’t care; they just want their favorite racer to win. That’s what they want to see.”

Fans for Maddux definitely liked what they saw, as he steered his Ridewell Suspensions ’63 Corvette—the lone car in the event sporting a roots-type supercharger—to quicker passes in each round of eliminations. He opened with a 3.78 at 195.62 to get by number-five starter Chad Javers, then posted 3.75 at 195.48 in a solo pass after Randy Merrick’s ’79 Corvette failed to start. In the semis, Maddux took on Hamstra, going 3.74 at 192.82 for the win and earning lane choice by a hundredth over Jim Sackuvich for the final.

Sackuvich, who qualified his nitrous-boosted 2014 Camaro seventh, defeated last year’s PDRA Pro Extreme World Champion Mike Recchia in round one, then downed Pesz before eliminating Jon Stouffer from the semis. Maddux dominated the final, though, posting a solid .025 holeshot, then leading the full stretch with a career-best 3.72 seconds at 197.91 mph over 3.79 at 199.58 for Sackuvich.

“You know, after the first-round win it was like all the pressure was off. Every driver says it, but it’s so true, once you get past the first round it just gets easier; not competitive wise, but going up there you’re just more calm,” said Maddux, who owns Precision Metal-Tech in Springfield, Mo.

As the nephew of noted St. Louis-area chassis builder Jerry Haas, Maddux grew up around drag racing and often visited the Gateway facility, serving as a crew member in all classes from bracket-racing doorslammers to NHRA nitro burners; however, his MWPMS win came in his first race as a driver within sight of the world-famous St. Louis arch.

“Ever since I was a little boy I’ve wanted to race there,” Maddux revealed. “When my crew chief, Cody Barklage, was still driving I was a mechanic on his car and now he’s calling the shots for me and doing a great job of it, too. I mean, we won together the first time I raced in St. Louis, so it’s like I told my wife; it makes it memorable.”

Stinnett began his climb to the St. Louis RvW title from the fourth spot in qualifying, behind polesitter Mark Micke, Jeff Naiser and Tim Slavens. He then got past a redlighting Jason Hoard, Slavens in round two, and Micke with a big semi-final holeshot. Waiting for him in the final was Naiser, who previously defeated DeWayne Mills and points leader Daniel Pharris before just breaking the beams with his nitrous-fed ’69 Camaro for a solo run in the semis. Stinnett’s twin-turboed ’93 Mustang again left first in the final and he never looked back, winning with a 3.74 pass at 201.16 over Naiser’s 3.78 at 194.66-mph effort.

Jimmy White led the way over 15 X275 qualifiers, with eventual winner Felts and Todd Moyer completing the top three. In eliminations, Felts and his turbo-boosted ’91 Mustang made it through Chuck Hunter, Orson Johnson and Moyer before downing Joseph Oksas with a 4.44 at 160.90, representing the quickest pass overall throughout eliminations.

Finally, Canadian Jim Bell prevailed in the unique MWPMS Slammers class for Pro Mod non-qualifiers that also allows buybacks for qualifiers eliminated from round one of Pro Mod racing. After missing the 16-car cut by just 11-hundredths of a second with his twin-turbocharged ’69 Camaro, Bell went on to beat Javers with a 3.78 pass in the Slammers final.

“This was an event that will be remembered for a long time; it really was historical,” Haney said. “We had a record car count, record numbers, big names like Rickie Smith, Mike Recchia and Jim Bell in addition to all our great Mid-West Pro Mod Series regulars, a great track with prep by Kurt Johnson and VP Fuels traction compound, Chad Reynolds from Bangshift.com said they had one of their biggest live-streaming audiences ever, and Jimmy Biggs always does phenomenal work with his videos and interviews in the pits bringing these guys’ stories to life.

“I even had one racer tell me he got a sponsor from being involved with this series. He said it was because we brought attention to him even though he’s not one of the so-called ‘stars’ but he’s made to feel like a star here. That made me happier than anything,” Haney added.

“That’s really what this is all about. My goal for the series is not to be number one, not to be an NHRA, not to be a PDRA, not to be any other series. It was built to be the place where your 27-hundred pound car can go and still be competitive. Why? Because we maintain parity. We keep the rules so one combo can’t run off the other; we just won’t allow it. If we go faster, we’ll slow things down and that’s just how it’s gonna’ be. We are a series that wants to have close racing and have fun and you know what? We did that last weekend in St. Louis.”

The Frankenstein Engine Dynamics Mid-West Pro Mod Series will return to action Sep. 7-8, at Xtreme Raceway Park in Ferris, Tx., for its seventh of eight scheduled events this year. The series finale will be held Oct. 12-13, at Osage Casino Tulsa Raceway Park in Tulsa, Ok.