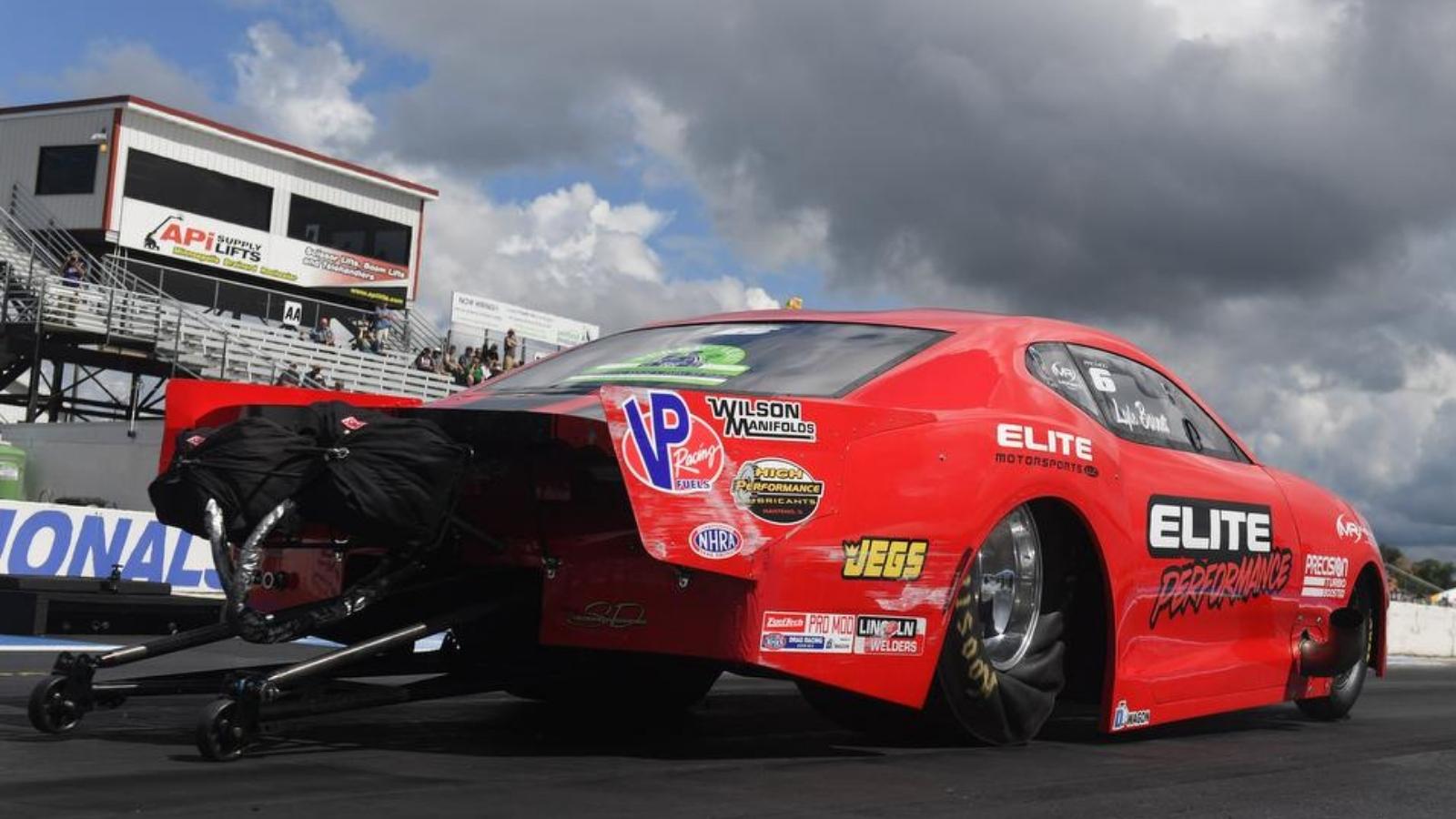 The weekend was full of emotion and hustle for Lyle Barnett’s Elite Motorsports Pro Mod team at the Lucas Oil NHRA Nationals at Brainerd International Raceway. The talented driver experienced multiple ups and downs over the course of the event, including losing in the first round of eliminations despite setting the track speed record in the same pass.

Barnett began his first trip to the historic race track without his Crew Chief, Justin Elkes. Travel complications delayed the skilled tuner and he didn’t make it to the track until about five minutes prior to the third qualifying pass on Saturday. Pro Mod crews run on efficiency and every member is vital.

Despite the absence of his crew chief and going up in smoke near the finish line in his first qualifying pass, Barnett’s crew never lost sight of what was at stake. They knew that it would be a tight turnaround to tear things apart, diagnose any issues, and put the car back together in time for the second qualifying pass, which also served as the first round of the D-Wagon NHRA Pro Mod Shootout.

The team immediately went into thrashing mode, with the unspoken understanding that timing, precision and communication would be key if they were to get to the staging lanes in time. In the true spirit of drag racing, Barnett’s Pro Mod competitor Stevie “Fast” Jackson (who was slated to compete against Barnett in the first round of the D-Wagon Pro Mod Shootout) was there to lend a hand to help his opponent get to the starting line on time and fully prepared. Unfortunately, Barnett’s car shut off early to give the win to Jackson.

Things turned around for Barnett in the final qualifying session of the weekend. His powerful Twin Turbo Pro Mod machine hooked up early and held on for a ferocious pass of 5.806-seconds at 254.04 mph to qualify eighth. He faced Jose Gonzalez in the first round of eliminations this morning. Gonzalez got the starting line advantage and held on for the win, while Barnett’s powerful launch resulted in his best run of the weekend, a 5.774 at 256.16, setting the track speed record in the process.

“This weekend was a whirlwind,” said Barnett. “Overall it was more successful than it may have appeared from the outside. To set a speed record our first time at a new track really shows just what this crew is capable of and I’m really proud of my team. Jose and the Q80 team are as good as they come, they’re the reigning champs, and Steve Petty knows how to get down the race track.

“It may not have been the result we envisioned, but to see how everyone in the Pro Mod community rallied around us and pitched in to help when we needed it, that’s what this sport is all about – making each other better. We’ve still got a lot of racing left to do this season and I think everything we’re learning right now is about to pay off in a big way. We definitely feel like we have a car that can win, we just gotta string these good runs together! There was a huge shake-up in the points this week. The rest of the year is gonna be interesting. I’d like to thank my crew Justin Elkes, Ben Staas, Mike Earle, my dad, all of my sponsors, and the folks that stand behind my program. God bless the USA!”