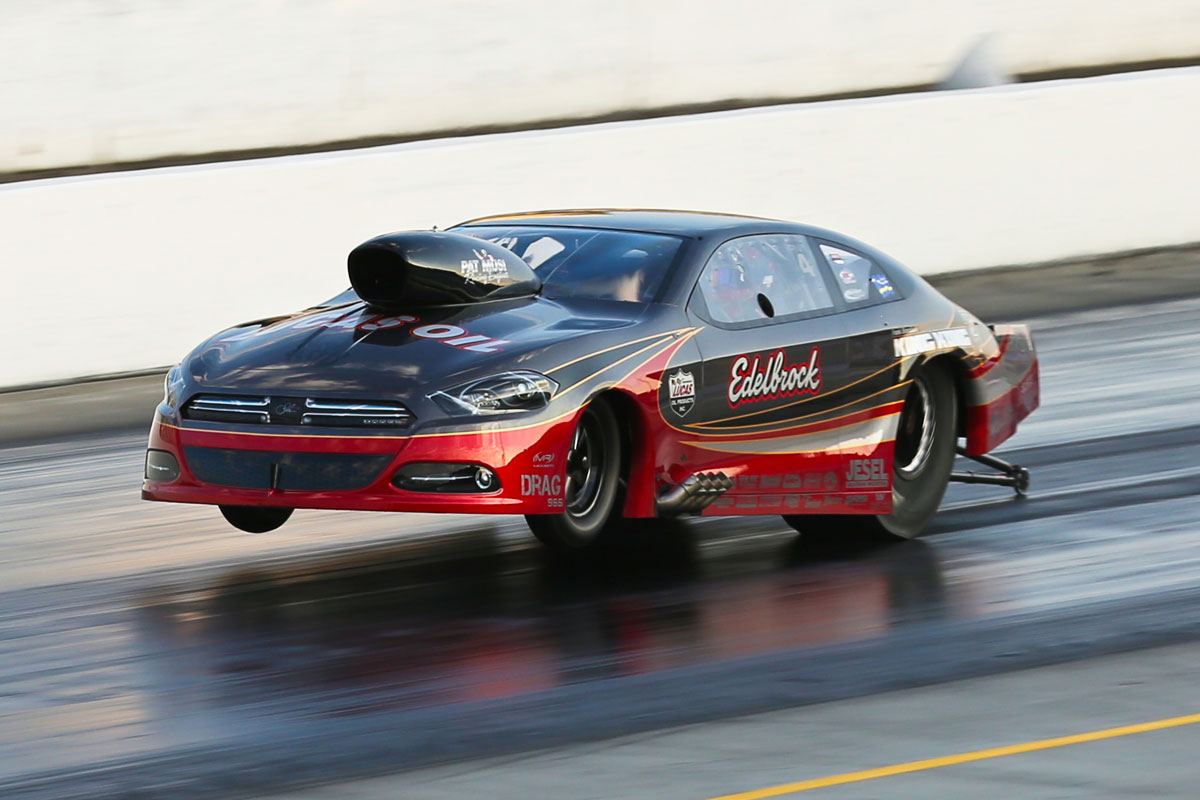 It was a record-setting weekend for Lizzy Musi and the Musi Racing team in Darlington, as the Pro Nitrous star raised the bar for performance in the class at the Professional Drag Racers Association (PDRA) Fall Nationals at Darlington Dragway.

Musi, who already held the speed record of 209.23 mph in the class, put a complete stamp on the quickest and fastest marks in Pro Nitrous thanks to her record-setting pass of 3.615-seconds at 208.62 mph on Saturday in the Frank Brandao-owned Edelbrock/Lucas Oil “King Kong 7” 2018 Dodge Dart. If the conditions presented themselves, a new record was the goal and Musi accomplished it in style.

After qualifying fourth, Musi opened eliminations with a 3.637 at 207.95 mph. She put together the record-breaking pass of 3.615 a round later, following it up with a pass of 3.618 at 208.72 mph in the semifinals to back up the record. After an up-and-down season, setting the new E.T. mark was a definite highlight as the conclusion of the season nears.

“Everything kind of came together on Saturday with the weather and the track conditions, and the team took advantage when the opportunity was there,” Pat Musi said. “It’s always a big deal when you can set a record. Lizzy did a great job driving and the team gave her an awesome car to make those two runs. To have back-to-back .61s, that’s pretty remarkable, and we’re pretty happy with how the weekend turned out. It definitely puts us on a good path heading to the final race.”

The record performance helped ensure a semifinal finish at the penultimate race of the 2019 PDRA season. It kept Musi sixth in points heading to the PDRA World Finals, which takes place Oct. 17-20 at Virginia Motorsports Park, fueling the notion that the team can end the year on a strong note.

Musi has a strong track record at VMP, including setting the class speed record there a year ago, and confidence remains high she can grab her first victory of the season and finish in the top five in a loaded Pro Nitrous class.

Of course, if conditions again present themselves on what is widely believed to be one of the best racing surfaces in the country, expect Musi and her team to take a big swing to close out the season.

“We’re going to Virginia with some really good momentum and you certainly want to do well to end the season,” Pat Musi said. “Lizzy just continues to get better as a driver, and we’re excited to close out the year in Virginia. We’re not afraid to throw everything we can at that track, and it’s been a good place to us in the past, so a win and possibly another record would be a great way to end the year.”

Before the PDRA World Finals, Musi will also compete this weekend in her Edelbrock-equipped “Aftershock” car for Street Outlaws: No Prep Kings action at Palm Beach International Raceway.