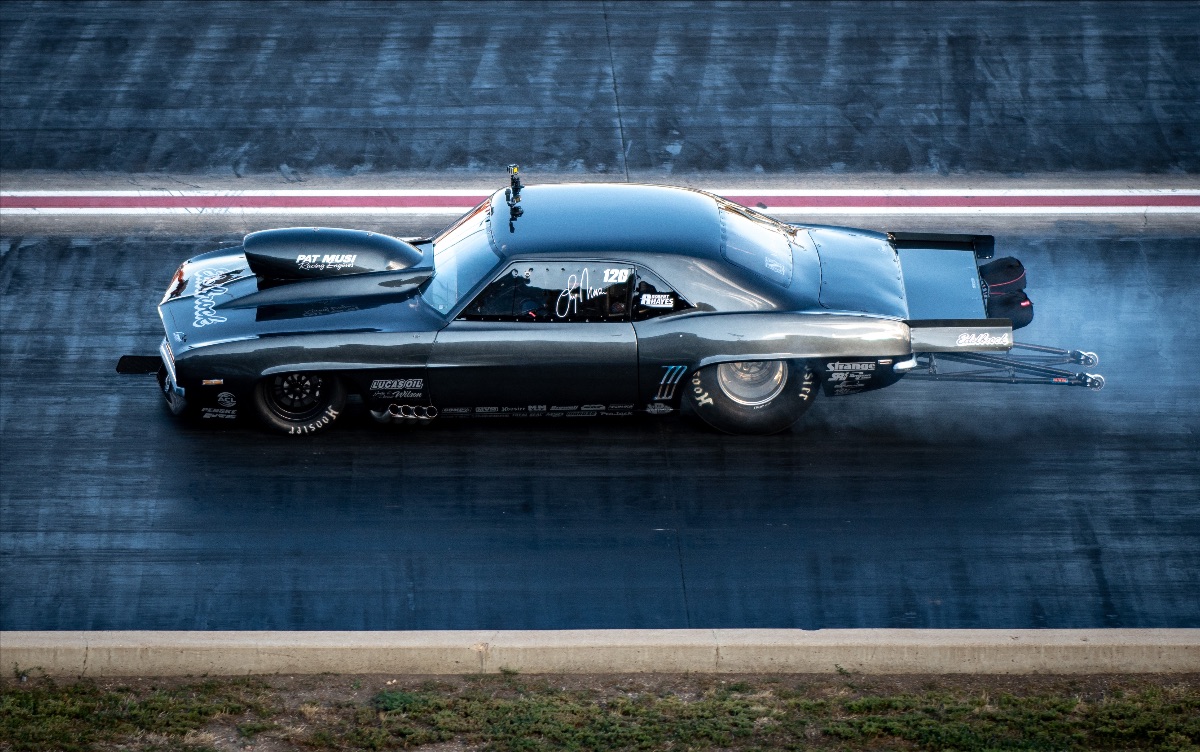 Despite the challenge of racing at altitude in a nitrous car, Lizzy Musi and the Musi Racing team continued to roll, winning their second straight Street Outlaws: No Prep Kings race with an impressive performance at Bandimere Speedway near Denver, CO.

Musi knocked off veteran Jeff Lutz in the final round in her Edelbrock and Lucas Oil-powered “Bonnie” Camaro to cap off a stellar weekend on Thunder Mountain. It followed their standout performance in Tuscon the previous week, as the team has run roughshod over the competition at two challenging facilities.

“It was a great weekend and we’ve got a great hot rod,” Pat Musi said. “We had to lean on the motor pretty hard, but the car is working about as good as you could ever want. Lizzy is driving well and it’s just a really good deal all the way around. I knew we had a hot rod when we left Tuscon and I think it’s only going to get better.”

The Pat Musi Racing Engines-powered Camaro and the team have been close to flawless the past two races following the triumphant return of “Bonnie” in Tuscon.

Musi drove to the victory there, just eight weeks after a top-end crash at Darlington, but racing at an elevation of nearly 6,000 feet in a nitrous car provided another massive challenge last weekend. But Musi and the team were up to the task, taking out an impressive array of challengers in Denver. After knocking off Robin Roberts in the opening round, Musi unfortunately had to take on her fiancé and teammate Kye Kelley in the second round. Musi picked up the win there and then got past Brad Eglian to set up a pivotal semifinal with standout Ryan Martin.

Musi, though, got the best of Martin and then drove past Lutz in the final round to give the team its second straight victory.

To take a nitrous car, which Robert Hayes rebuilt in just 45 days following the crash, to a win with the tremendous altitude challenges at Bandimere Speedway simply made it that much sweeter for the team.

“We had to figure out what the motor wanted,” Musi said. “We’re way further ahead of that altitude than we ever have been, but we still have work to do. Everything is coming together and we couldn’t be happier. There were no easy rounds and we got challenged every pass, but this team has gelled well and we’re excited. We feel pretty good and I think everyone has realized this car is for real and this team is for real.”

Lizzy once again showed impressive driving prowess in navigating her way to victory, giving her a chance to win a third straight race this weekend in Tulsa, OK.

She managed to do that during her historic string of three consecutive wins in her debut season on the Street Outlaws: No Prep Kings circuit in 2019, and the team, which includes Hayes, Elliott Loe, Jeremy Aceituno, Adam Drzayich and Musi’s wife, Liz, feels good rolling into Tulsa.

It’s the third race in a stretch of six consecutive races to end the year, but the Musi Racing team has momentum and is looking forward to seeing what the car can do when not racing at altitude.

“This car is badass and I’m having a lot of fun,” Musi said. “We survived the altitude with our stuff intact and it’s only going to get better. We’re going to have a lot more power, so we’ll see what we can do. I think we’re going to be really fast in Tulsa.”