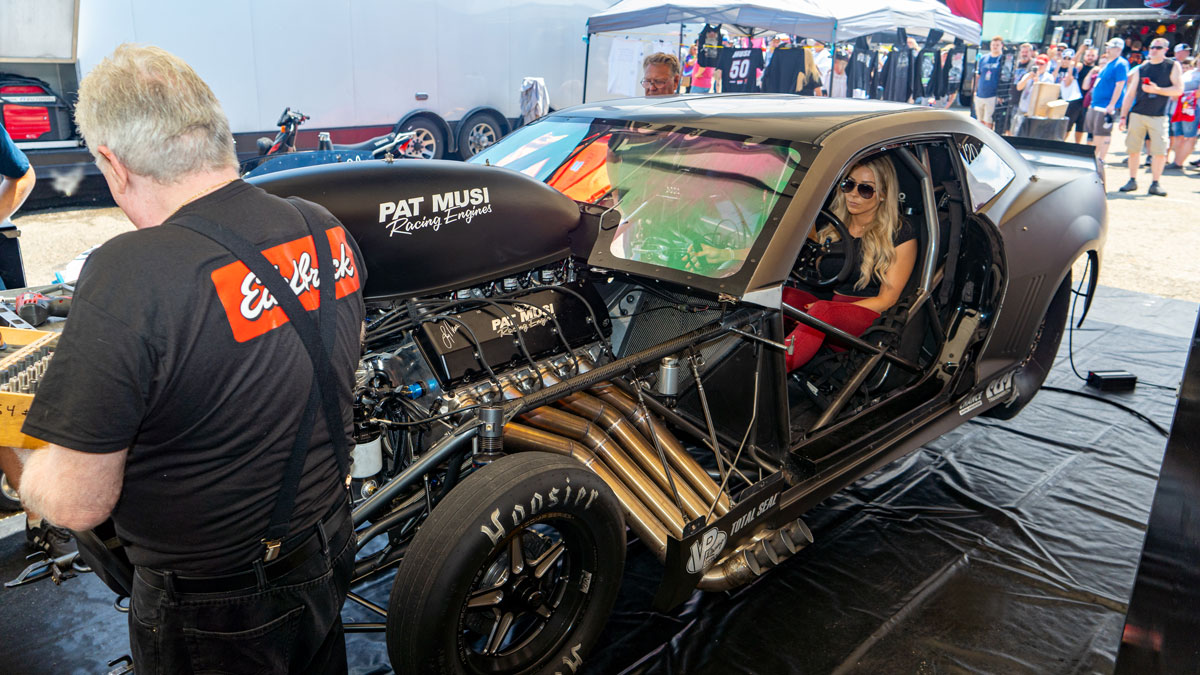 Following a strong performance at the most recent Street Outlaws: No Prep Kings event, the Musi Racing team is thinking big heading to this weekend’s race at South Georgia Motorsports Park in Valdosta, Georgia.

Lizzy Musi drove the Edelbrock-equipped Lucas Oil “Aftershock” Camaro to the semifinals last weekend at Palm Beach International Raceway in Jupiter, Florida, putting the team in a strong position heading to the third race of the 2021 Street Outlaws: No Prep Kings season. After some struggles at the opening race earlier this month in Columbus, Ohio, the Musi Racing team made significant strides a week ago and that has them confident for Valdosta.

“We think we’ve got a car that can win,” Pat Musi said. “This car is coming around. We were struggling down low and we’ve got that fixed. I thought we could have won that deal last week, but we think we’ve got things figured out. We’ve always had power and Lizzy will be pretty tough to beat this weekend if we get everything figured out.”

It would be an ideal send-off for the “Aftershock” Camaro if the Musi Racing team can pull out the victory at SGMP against another strong lineup of NPK drivers.

The team is set to debut its new ’69 Camaro, and Pat Musi is confident it will be ready at the next race on the tour after Valdosta, which takes place July 9-10 in Cordova, Illinois. There is plenty of excitement surrounding the car, which was built in-house by Robert Hayes Race Cars and the Musi Racing team using a number of components from Jerry Bickel Race Cars.

The car was purpose-built for the No Prep Kings series and will include the latest and greatest 959 cubic-inch nitrous engine from Pat Musi Racing Engines. If this weekend does happen to be the final race for the current car, going out with a victory would be the perfect capper.

“That would be pretty cool to get a win in the final race with it,” Musi said. “This car really wasn’t made for what we’re doing. It’s never been a problem and we’ve had success with it, but it just wasn’t built for this type of racing. So a lot of the stuff we’ve learned with this car will transfer to the new car. We’ll be quicker right off the bat and we’re excited to see what we can do with it. It will carry the same backing from Edelbrock, Lucas Oil, Newell INX, ACL RACE Series Bearings, VP Racing Fuels, Strange Engineering, and all the companies that support us.”

The return to racing at dragstrips has already proven to be a huge hit as well. Street Outlaws: No Prep Kings, which is a hit TV show on Discovery, kicked off their 2021 season in front of an overflow crowd at National Trail Raceway and drew a massive amount of fans at PBIR as well.

That energy has been noticeable at the track, and Musi believes it brings out the best in his team. Lizzy Musi has become one of the top stars in the series — with long autograph and merchandise lines to prove it — and the team is excited to see the fan turnout in Valdosta this weekend.

“That adrenaline of just getting out there and running has been really good,” Pat Musi said. “Lizzy has a hell of a following, and she’s got a line of fans in the pits from Friday morning to Saturday night. It’s pretty cool. She likes racing in front of a big crowd, and she’s the real deal. She’s a great driver and we’ve all got a lot of faith in her.”