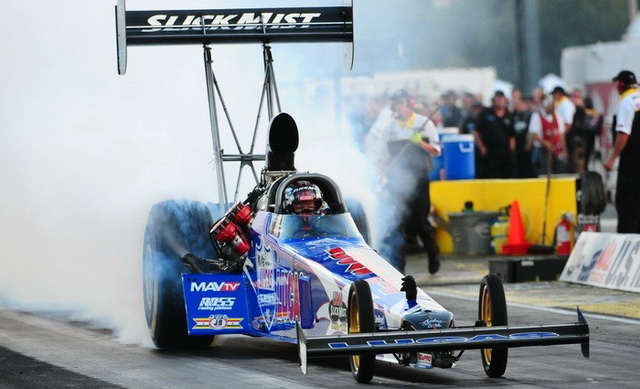 For the first time in Bruce Litton’s Top Fuel career, Lucas Oil will not be the major sponsor for his team. Lucas Oil will, however, stay on in a smaller role.

Over the last 16 years Litton and Lucas Oil have certainly been a dynamic duo in the Top Fuel ranks. Together they have accomplished 26 national-event victories in 66 trips to the finals, finished 2nd in national points standings seven times, and scored the highlights of Litton’s career: the 2001 IHRA Sportsman of the Year, the 2007 IHRA Top Fuel World Championship, and the 2012 IHRA Canadian National Championship. This partnership is the longest sponsorship Lucas has had with a non-cycle drag team.

“I will always be indebted to Lucas Oil,” Litton said of the long-term partnership’s end. “They are family and I will always value Forrest Lucas’ friendship.

“I have always spoken highly of Forrest Lucas and his company because he’s the epitome of the ‘American Way’. He is a self made man. He started from nothing and built the Lucas empire that has had a tremendous impact on the racing community and automotive industry.

“Lucas Oil is an outstanding organization. Drag racing wouldn’t be what it is today with them. Besides that, Lucas has
done tremendous work with Protect the Harvest. It’s hard to give the man and the company enough credit for their efforts. Although we’ll no longer be working with Lucas in a primary sponsorship role, we are forever grateful for all they’ve done.”

Although currently without a major sponsorship, Litton plans to continue fielding his Top Fuel machine.

“We will still run all of the IHRA Nitro Jams, several match races and possibly select NHRA events, depending on the securement of a new major sponsor,” Litton said.

“I have always been proud of my team and have the highest confidence in us now. We have a lot to offer the sport and potential sponsors. As one of the few teams in Top Fuel to run both the U.S. and Canada and across organizations we reach a broad fan base. We have a winning record and a knowledgeable and experienced team. We’re clearly dedicated to this sport and 2013 will be no different.

“We are open and available for sponsorship on all levels–everything from associate and per race sponsorships to a major commitment. We look forward to representing a new company and promoting their brand and product.

“Again, I want to thank Lucas Oil for their support and friendship over the years. They have done a tremendous amount for the sport and for me. I am very grateful.

“Now, though, it’s time to focus on what’s ahead. The future is bright and full of potential for Litton Racing.”